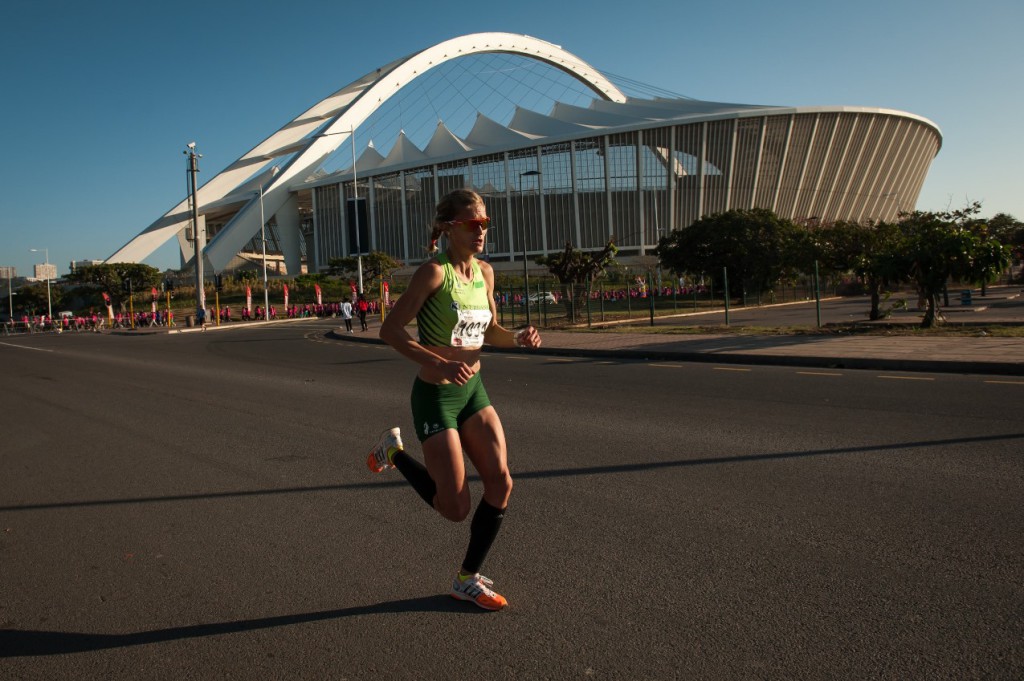 The streets of Durban were teaming with activity on Sunday, 20 July 2014 when over 4000 runners and walkers gathered at the Berea Rovers Sports Club to participate in the annual Totalsports Ladies Race.  Irvette Van Zyl (Nedbank Running Club) was the lady to beat, completing the 10km race in an impressive time of 33 minutes 49 seconds.

According to Van Zyl, the start was hectic.  “This is only my third race this year, having come back after six months of no running due to injuries.  Wanting to prove that I can still run, I think I started the race a little too fast.  I hit a bad patch between 3km and 7kms.  My legs weren’t responding, and I was just overthinking things.  I felt strong again from 7kms onwards”.

“I am really happy to once again finish under 34 minutes,” continues Van Zyl.  “I am currently training for a marathon that is taking place in September.  So I have had to be patient, not going too fast too soon.  I am happy to run injury free.  The atmosphere at the Totalsports Ladies Race was really nice.  Women’s Day is definitely a big deal.  It’s nice to support a good cause and to see so many women standing together”.  Rutendo Nyahora (Nedbank Running Club) came in second, while Jenna Challenor (Boxer Athletic Club) finished third.

It was an emotional day for 2013 defending champion Jenna Challenor, who ran in memory of close friend, Nikki Haynes.  “Nikki was a great friend of mine.  She passed away last weekend after fighting cancer for three years.  She was the most amazing woman with a zest for life like nothing on earth.  One of the bravest and strongest people I have ever known, she is going to be hugely missed,” says Challenor.

COMING UP NEXT:  Totalsports Ladies Race Johannesburg and Stellenbosch

With two events to choose from, a 5km run/fun walk and a 10km run/fun walk, the Totalsports Ladies Race is ideal for the whole family, from moms with prams, children, husbands, family and friends

Entries are limited to 5000 entries per event.  Entrants will receive an official race t-shirt.