Victory all but sealed at joBerg2c 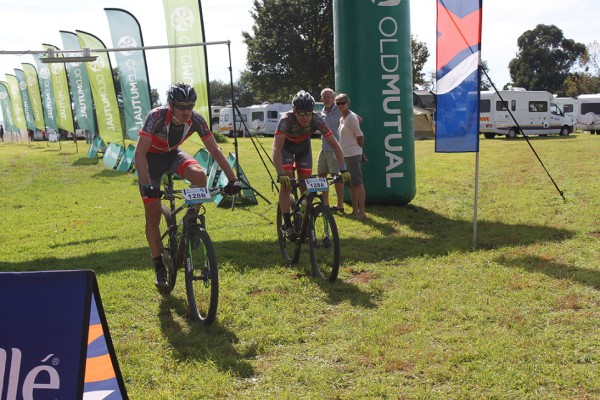 EAI Cycling’s Johann Rabie (left) and Gawie Combrinck all but sealed their victory on day six of the nine-day Old Mutual joBerg2c near Underberg on Wednesday. Photo: Full Stop Communications

Defending champions Johann Rabie and Gawie Combrinck delivered another workmanlike performance to all but seal their victory on day six of the Old Mutual joBerg2c near Underberg in KwaZulu-Natal on Wednesday.

The EAI Cycling pair took their fourth consecutive stage win on the 97km route from Nottingham Road to Glencairn Farm in the shadow of Sani Pass to extend their overall lead to more than 18 minutes.

Rabie and Combrinck cruised into the finish in a time of 4:17:47, just 38 seconds clear of The Gear Change’s David George and Justin Tuck, with Hanco Kachelhoffer and Pieter Seyffert of Altech Autopage Karan Beef third in 4:20:57.

After the mountainous stage, which saw riders ascend Snow Top Mountain – the highest point on the nine-day route – the leaders retained their similarly lofty spot in the standings with an aggregate time of 24:47:34.

Despite crashing heavily, Avis Van Rental’s Tyronne White and partner Andrew Hill still managed to place fourth on the stage in 4:22:37 to remain second in the general classification in 25:05:47.

Kachelhoffer and Seyffert rounded out the overall podium in 25:06:53.

Heavy mist dampened the start of the day’s racing from Clifton Preparatory School but after an enforced 10km neutral zone the four teams quickly broke away.

They stayed together as they headed for the foothills of the southern Drakensberg until White crashed with 20km to go on the aptly named Face Plantation stretch.

“We were coming down off the top of Winterhoek after the second waterpoint and as we reached the tribal land area Tyronne got on the wrong side of David when he swerved to avoid a rutted section and landed rather heavily,” said Hill.

Their three rival teams initially sat up but then decided to make the most of White and Hill’s misfortunes as they headed up the last technical climb on the Red Bull Run.

Rabie lifted the pace on the ascent to shake Kachelhoffer and Seyffert before the final two-team chase towards the finish.

“We caught them in this last section but we worked pretty hard for it,” said Sanders.

“They were way ahead of us but we closed the gap, rode their wheel, recovered, and then just put the hammer down.”

The Valencia Cycling duo took the stage win in 5:01:06 for an overall time of 28:06:40, which translates into a lead of more than five minutes.