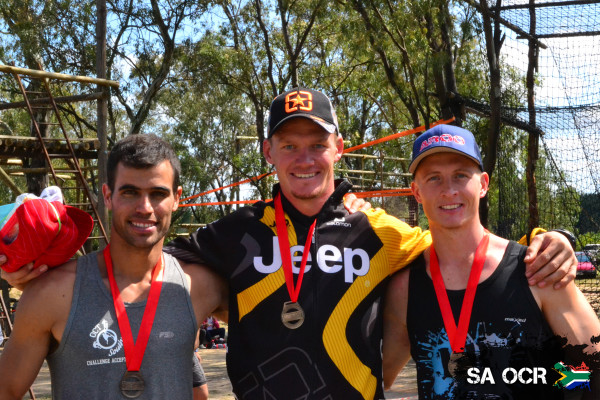 Van Tonder, competing in the toughest race of the day, the Elite Savage Beast (15km trail run and 55 obstacles), has, so far, won all four of the Beast Obstacle Course Racing events.

Von Tonder set a blistering pace from the start and crossed the finish line in a time of 1h29, over six minutes ahead of second-placed Marius Smith (OCT South) in 1h36:01 with Bradley Claase (Team Battlerush) 3rd in 1h37:45 and Jay Jay Deysel (Jeep Team) 4th in 1h41:49.

The cold early morning conditions added to the pain the elites endured throughout the course that was considered the toughest so far. The race had the highest number of obstacles (55) of any OCR event in South Africa, many of which were highly-technical, upper-body strength challenges.

The first obstacle was a steep slope into a cold stretch of water, closely followed by the ‘Chandelier’, a 20m long obstacle of chained hanging tyres over water. The cold, slippery metal chains proved treacherous for many.

The decider on the day was the final obstacle, # 55, which hit many tired athletes hard after a gruelling 54 obstacles over 15km of trail running. The obstacle was an extreme test of upper body strength and grip, combining monkey bars, body twisters and weavers, gum pole shuffles, inverted cargo nets and cliff-hangers strung out over 20 metres.

Only seven elites (6 male and 1 female) were able to complete this obstacle, one of which was Savage Beast female winner, Michelle Meyer, who was also the only official female finisher.

Said Jeep Team OCR star, Thomas van Tonder, “This was a tough race with the obstacles definitely presenting the biggest challenge. In the chilly morning, heading straight into the water made it difficult for us to warm up and get into a running rhythm. I feel blessed to take the win, extending my record of sole victor of all four Beast races so far. It’s now become a personal challenge to see how long I can hold onto the title. From the last Beast race, my time has also improved by four minutes.”

Jeep Team’s female OCR athlete, Carina Marx, was on fire this weekend on the other side of the country, finishing 3rd Elite Woman at Race #1 of the Impi Challenge, which took place in Stellenbosch from 9 – 10 April 2016.

The Impi Elite course consisted of an 18km trail run and approximately 26 obstacles, with female athletes required to complete the same extreme obstacles as the men.

Said Carina Marx, “The first event of the Impi Challenge was tough due to the extreme Stellenbosch terrain. At the start, the strong runners – Hanneke [Dannhauser] and Trish [Bahlmann] – raced ahead, leaving Dominique [D’Olivera] and I battling it out. Dominique then made a break from me and overtook Trish 5kms into the race. Towards the end, we faced a very tough obstacle – a 50kg salt bag that we had to pick up and carry on our shoulders over a distance. Here my strength-advantage came into play. The others battled to lift the bag, which gave me the break I needed to move ahead of Trish and finish 3rd on the podium.”

This year, the IMPI Challenge is a qualifying event for the OCR World Championships, which take place later this year. The only other series that doubles as a qualifier is the Jeep Warrior Series.

For all the Impi Challenge results, go to https://www.entryninja.com

Tagged with: featured The Beast OCR Challenge The Wedge