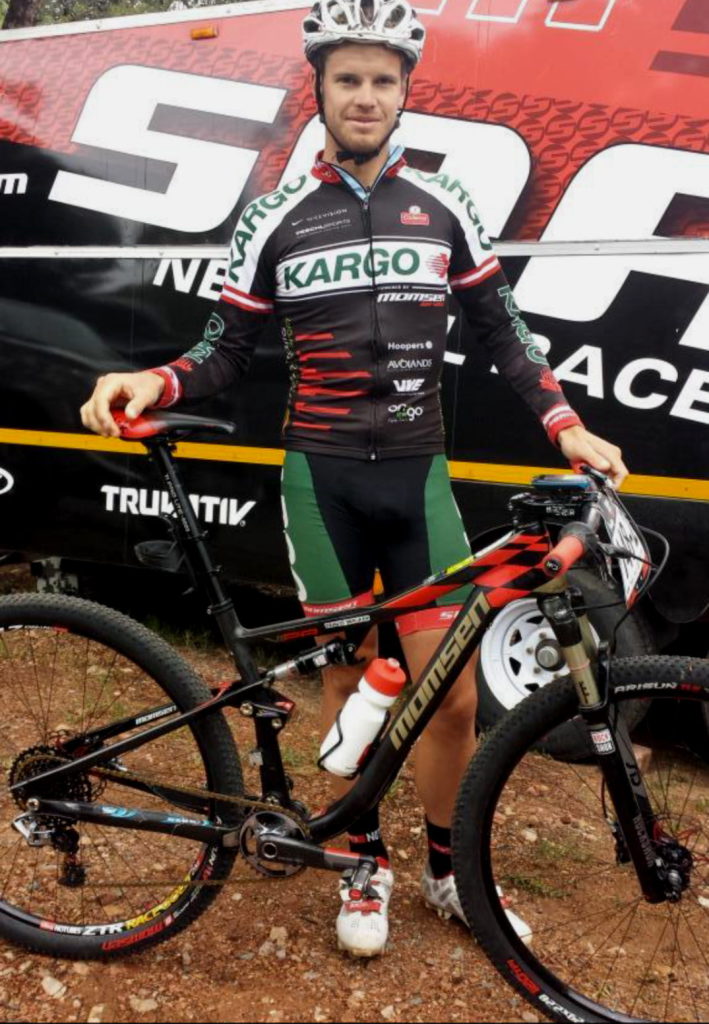 Kargo Pro MTB’s Travis Walker was forced to tackle the Bridge Cape Pioneer Trek alone on his Momsen Vipa after his team mate and race partner Rourke Croeser was diagnosed with a eleventh however kidney infection forced Croeser out of the 7-day long contest. – Supplied/
Gameplan Media

Durban – Kargo Pro MTB Team’s hopes of a podium finish at the recent Bridge Cape Pioneer Trek mountain biking stage race went up in a cloud of smoke before the starter’s gun even fired however a resilient and brave Travis Walker still went on to win the solo men’s category honours and finish in a remarkable third fastest time overall.

The under-23 star had been all prepped and ready to tackle the seven day long Western Cape contest with Kargo ace Rourke Croeser however a frustrating diagnosis of a kidney infection just the day before the start of the race forced Croeser out of the competition and left Walker having to take on the challenge alone.

“It was obviously disappointing not to have Rourke with Travis on the start line but everything happens for a reason and things panned out pretty well for us in the end,” said Kargo team manager Shaun Peschl.

“You’re always going to have obstacles such as riders getting sick or injured thrown at you and you just have to look to overcome them as best you can which Travis (Walker) did brilliantly!

“From start to finish he was just spot on and he turned it around and showed the mental toughness. He is a man of few words and he let his legs do all the talking at Pioneer!” he added.

After learning of his ill fate, Croeser described his emotions on took to social network, Twitter. “Disappointed is an understatement. Totally gutted!”

Just two days later though and he was full of praise for his partner’s efforts. “I have believed in this guy’s ability for a long time. Well done my brother!”

A determined effort on the infamous 86km second stage, which included the treacherous climb up Swartberg Pass and no less than 2781m of climbing, saw Walker make up over eight minutes on solo men’s leader Alan Gordon before being the first solo men’s competitor across the line in both the fourth and fifth stages, handing him the category’s general classification lead.

A final stage second place in his category was enough to hand Walker the solo men’s spoils, jus reward for his determination and mental toughness.

“Trav and Rourke will now look to take on the FNB Wines2Whales in a couple of weeks’ time as their last big one of the year before they enjoy a three week break,” explained Peschl. “Brendon (Davids) is currently on his break while Alan (Hatherly) and Marco (Joubert) are just starting their active rest.”

Meanwhile, inland-based Kargo members Stuart Marais and William Mokgopo will look to fly the team’s flag high at the Nissan TrailSeeker Down n Dirty Marathon, the fifth and final race of the five leg series, on 1 November in Centurion.