Ward and Purchase up for Fish challenge 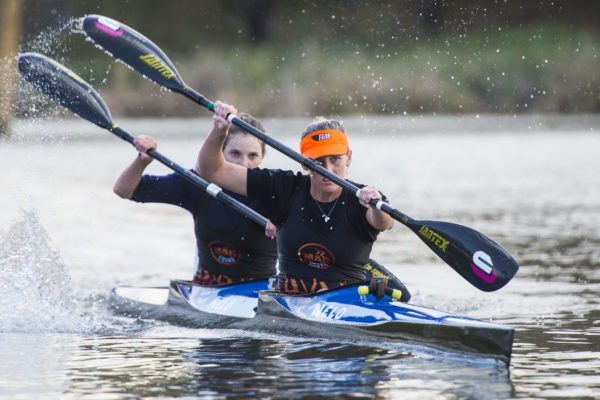 Pictured on their way to winning the SA Marathon Championship K2 title together in 2015, the internationally renowned pair of Jenna Ward and Kyeta Purchase will team up again for this year’s Hansa Fish River Canoe Marathon from 27-28 September.
Anthony Grote/Gameplan Media

Cradock – 2019 will be a far cry from Jenna Ward and Kyeta Purchase’s first Hansa Fish River Canoe Marathon together four years ago when they take on the two day roller coaster from Grassridge Dam to the Cradock Sports Complex on 27 and 28 September.

2015 saw Purchase taking on her first river marathon a week after she had her appendix removed and the pair bumped, scraped and swam their way through the 82km. However with far more experience and confidence in a boat together they will be a serious podium threat come the end of September.

Despite Purchase being a rookie and the pair having never paddled a river marathon before they finished fourth in the women’s race in 2015, a sure sign that their partnership was going to become a strong one.

The pair is building up well for a strong shot at an ICF World Canoe Marathon Championships gold medal in China in October and their flat-water marathon credentials include a World Championship silver medal in Brandenburg in 2016.

“Kyeta took a break from paddling last year to focus on life saving and so we chatted at the beginning of this year and decided to give this year’s World Champs a full go,” Euro Steel’s Ward said.

“Luckily for us we click in the boat and don’t need a lot of time together for everything to fall into place.

“We have been training every morning and every evening together so we are very comfortable. The only difference is that it will be a different boat to our marathon boat but that won’t be too much of a problem.”

The pair, under the tutelage of coach Lee McGregor, will be out for a good confidence boost ahead of their trip to the Far East and a positive result at the Fish will be just the tonic. Ward will be under pressure to defend the K2 Fish crown she won with Anna Kožíšková in 2017.

“Bridgitte (Hartley) and Christie (Mackenzie) will be a really good combination and I have heard that Nikki Birkett and Amy Peckett will be teaming up as well.

“Amy had a really good Dusi so they will be another strong crew to look out for,” Ward stressed.

The Fish is often a race that is diarised as early as possible by paddlers and Ward shares that same attitude.

“I never miss the Fish!” she exclaimed. “I know it’s just a few weeks before World Marathon Champs but I would never live with myself if I was sitting back in Durban and everyone was in Cradock!

“This year will be my twelfth Fish and I love it every year. It is such a fantastic weekend with friends and family on an awesome river.”

With its proximity to their trip to China, Ward feels that the race will be close to the ideal send off before they leave on 12 October.

“It’s going to be a good chance to spend some time in the boat in race conditions.

“We’ll be paddling for about three hours each day so it will also be a good last bit of distance training before we leave,” she added.