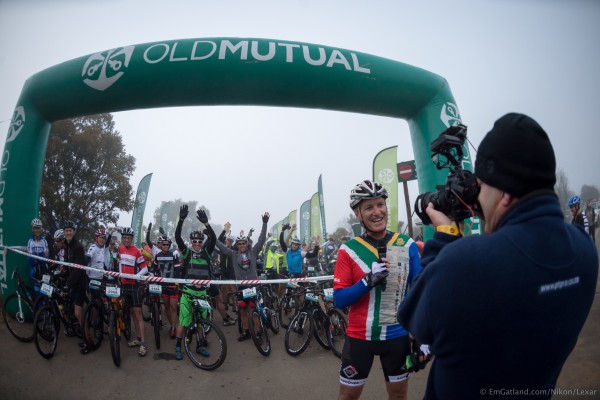 DStv viewers can win a once-in-a-lifetime experience with an individual entry to the 2016 Old Mutual joBerg2c when they watch the 2015 highlights package on SuperSport Eight from Monday night. Photo: Em Gatland/Nikon

Organisers of the Old Mutual joBerg2c will be giving away the journey of a lifetime to one lucky individual who watches this year’s television highlights package on DStv from Monday evening.

Would-be participants in the nine-day mountain bike race will have to watch the one-hour show on SuperSport Eight to discover the answers to a question that will be posted on the event’s Facebook page the following day.

The competition is open to South African viewers only. They will be required to share the competition post on Facebook and include their answers to the question in the comments section.

The first show is at 8.30pm with daily repeats flighted throughout the week. A new question will be posted each day until Thursday, but viewers only have to answer one of these to qualify for the draw.

According to race organiser Craig Wapnick, the 52-minute programme would take an in-depth, stage-by-stage look at this year’s race.

“This format makes it easy to follow and to rekindle the memories and share them with family and friends.

“It’s quite intense and emotional because it also follows the incredible journey of our blind Kenyan rider Douglas Sidialo and his tandem pilot John Mwangi.”

Wapnick said the individual entry prize would not limit riders to the solo category but that it could also be used to fund one half of a team entry.

He said entries would close at midnight on Sunday, May 31, and the winner would be announced on Facebook on the Monday morning.

“For those who don’t win, there’s still a chance to get an entry at 2015 prices when the early bird entries open at noon on the same day.”

He said the special price would be valid for exactly one week and entrants would have to be fully paid up by mid-day on June 8.

“As soon as the early bird window closes, we’ll open the official entries for 2016.”

The fully serviced race starts on the outskirts of Johannesburg on April 22 and crosses four provinces en route to the finish on the KwaZulu-Natal South Coast on April 30.

“Our event is still one of the best value races in the country in terms of what riders get and the once-in-a-lifetime experience they have.”