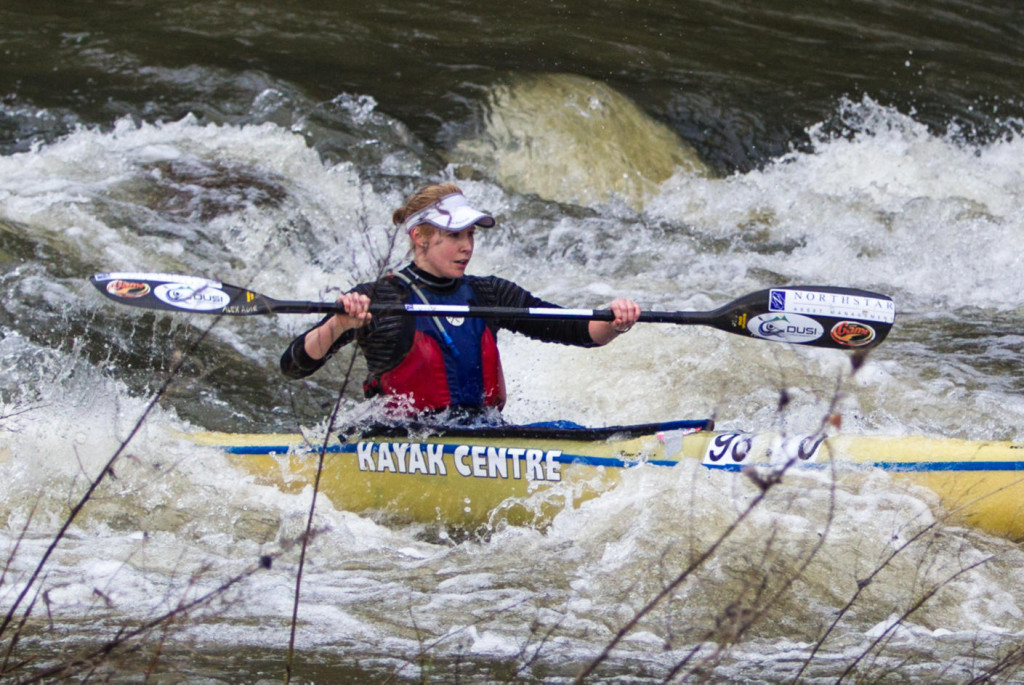 After a dominant season Alex Adie will start as one of the top contenders for the women’s title in the Berg River Canoe Marathon. However she will have to work hard to get the better of her twin sister Abby Adie.

Paarl – As the country’s top paddlers head for Paarl for the start of the Berg River Canoe marathon this week, the race organisers have assured them that a water release has been secured to top up the level of the Berg River that has dropped steadily in the past week.

Since the heavy rains and snowfalls in the Cape ten days ago, no rain has fallen in the region and the level of the river has slowly dropped, in the process defining the nature of the challenge of the race, particularly over the first two stages.

Numerous bluegum trees have fallen into the river, particularly in the Day One section between Hermon and Zonquasdrift, creating a large number of treeblocks that become far more difficult to navigate in a low river.

“In a full river you can generally go through, over or around the treeblocks, but on a low river it is tricky,” said former winner Graeme Solomon. “You often have to climb out of your boat if you can’t ramp over the trees. It’s like an obstacle course.”

However the race organisers have assured paddlers that a water release has been secured, aided by the fact that the Berg River Dam just upstream of the start in Paarl is 100% full, and an the ongoing water outflow looks set to the stepped up to 20 cumecs from 4pm on Monday afternoon, in time for the time trial on Tuesday afternoon, and the start of the race proper on Wednesday morning.

Once the paddlers reach the lower stages of the river, the accumulated water from the earlier rains will come into play, and the tree block challenges lessen, and the paddlers can look forward to excellent water conditions, particularly with more rain forecast for Thursday and Friday.

This debate is central to the Berg this year as a a very powerful field of classy long distance marathoners assembles, many of whom are relatively inexperienced on the Berg.

Add to that mix of Berg greenhorns two current Dusi champions in Andy Birkett (Eurosteel) and Lance Kime (Best4) and the calibre of new faces challenging for the podium daily is refreshing.

Birkett and Kime both make no bones about  their lack of local knowledge when it comes to the sneaks and channels, and the intricacies of negotiating the treeblocks, and both will look to tuck in behind the more experienced local paddlers for the first day and a half.

The local challenge is substantial this year with defending champion Lance King (Duxbury Networking) eager to prove that his win last year was no flash-in-the-pan, but as the yellow jersey incumbent he will feel the heat even more acutely from the men he paddles with every weekend.

Many are looking to Louw van Riet to deliver, as the trajectory of his recent form suggests he is in the best form of his career, and the Van Riet family would love to see another generation of their paddling prodigies on the podium.

Add to that mix the solidly consistent Heinrich Schloms, who has always been factor in the Berg and is a tenacious competitor, Edgar Boehm Jnr. and the class of youngsters like Craig Flanagan and Dom Notten and the group racing dynamics will be gripping to follow.

Veteran Graeme Solomon (Bamboo Warehouse) has also confirmed his entry at the eleventh hour, after the confirmation of the water release. Solomon is without a doubt the race’s most consistent podium presence, and with his 2001 win and 15 Bergs behind him, coupled with his continually impressive form, he will be a threat to the title, and can be expected to play a major role in moulding the group dynamics at the front of the race.

Another Dusi champion in the mix with a solid chance of threatening the podium is Sbonelo Khwesi (EuroSteel/Computershare Change a Life), or as Sbonelo “Eric” Zondi as he was better known when he won the Dusi title with Andy Birkett in February.

He came into last year’s Berg as a Berg novice, totally unfamiliar with the unique demands of racing on the Western Cape rivers and desperately short of local knowledge. However his tenacious nature and rapidly improving paddling form saw him consistently in the top ten, and he finished ninth overall.

The upcountry challenge will be considerable as well, fronted by Dusi icons Thulani Mbanjwa and Loveday Zondi and Soweto star Siseko Ntondini, all racing in the colours of the Soweto Canoeing and Recreation Club (SCARC).

One man who won’t be on the startline but who will be an eager spectator is nine times champion Hank McGregor, who will be at home in Durban for the birth of his first child.

The women’s race has numerous layers to it. Alex Adie has proven to be the season pacesetter since she settled in the Western Cape, but she will have her twin sister and Dusi star Abby Adie on the startline alongside her.

Just how much sisterly collaboration or sibling rivalry can be expected between the pair is uncertain, but with pressure to come from the likes of experienced Berg racers like Bianca Beavitt and last year’s runner up Kirsten Penderis, the women’s racing will be intense throughout.

There is also a significant group of women from the Blue Lagoon based MacSquad coming to the Cape to challenge for a place in the limelight, including Lauren Felgate, Nicky Russell and Hayley Arthur.

The MacSquad coach Lee McGregor, now racing as Great Grand Master at the age of 62, will be looking to improve on his staggering eighth place in last year’s Berg, the first time that a Master paddler has ever raced into the top ten at this famous race.

Also on the start-line will be the evergreen Great Grand Master Giel van Deventer, who will extend his own record of 44 Berg finishes when he reached Velddrif on Saturday afternoon. He will start alongside the Berg legends Lionel Eckermans, Jannie Malherbe and Edgar Boehm, all of whom have 40 or more finishes under their belts.

The time trial on Tuesday afternoon covers 7km from the Berg River Resort to the race start at the Paarl Canoe Club, and will be used to settle seeding for the top 50 paddlers. It looks set to be raced in warm and fair weather on good river conditions thanks to the 20 cumecs release from the Berg River Dam.

The first stage on Wednesday from Paarl to Zonquasdrift is 62km long, followed the shorter 46km stage from Zonquasdrift to Bridgetown and the headwaters of Misverstand dam, when colder weather and some rain is expected to move into the region.

Friday sees the legendry long third stage covering the gruelling 75km from Bridgetown to Zoutkloof tackled in chilly rainy weather, before the race heads for the finish at Velddrif on Saturday with a 59km stage through the tidal estuary and sandbanks, where the usual festivities will welcome every finisher home.