Waylon and HB looking for team work at KAP sani2c 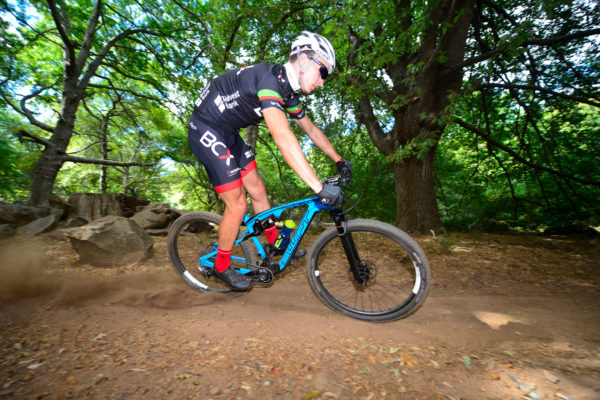 Himeville – Waylon Woolcock is looking for strong team tactics to take him and his KAP sani2c partner HB Kruger to victory in next week’s race from Himeville to Scottburgh on the KwaZulu-Natal South Coast from 11-13 May.

Last year Woolcock and Kruger were riding with different partners and were leading after Days 1 and 2 respectively when mechanicals robbed them of their chances of victory. This year they will be looking for a bit of better luck and some old-fashioned team work to give them an edge.

“My strength as a mountain biker in team stage races has always been not racing against my partner,” said Woolcock when assessing the chances of the BCX pair at this year’s event.

“Some teams seem to go out there to hurt each other – and look, it does seem to work for some teams who can race each other even in team events, but I have always felt that you are only as strong as the weakest member of the team.

“I think it probably comes from my background as a road rider, where we used to have a team of six to eight guys all working together for one person. It always surprised me when I came across from the road how the mountain bike guys did not understand the team tactics.” Woolcock’s shift from the road to the dirt came with some different ideas of how team work works, even in each-man-for-himself races.

“When I was first riding mountain bike with Neil MacDonald we would always work for each other, even in the individual events. The other mountain bikers would be amazed when I told them we split the prize money.

“With all my partners, Neil, HB and Darren (Lill) we have always split the prize money.

“HB and I are still a relatively new team. We have only been riding together for about a few months and I think it takes at least a year to completely understand each other.

“We are starting to have a good understanding and are getting a good feel for each other, but still need to verbally communicate. Once you have ridden together enough you start to know what the other rider is going through.

“With Darren I used to know what he was thinking sometimes even before he thought it.”

That team work took Woolcock and Lill to victory in 2015 at the sani2c and seemed to be working last year until Woolcock cracked a wheel on Day 2 after they had taken the lead on the opening stage from Himeville to Mackenzie Club near Ixopo.

In an ironic twist, Woolcock’s partner for this year’s race, together with his partner Johann Rabie, benefited from that misfortune and took over the lead at the end Day 2. But Kruger and Rabie then punctured on the fast Day 3, which allowed Matthys Beukes and Gert Heyns to secure a somewhat fortunate victory.

Beukes is the favourite to add a second KAP sani2c title to his resume, but will be riding with Philip Buys and they have been an almost unbeatable pairing in stage races this year.

As the PYGA Euro Steel team they were the top African team at the Absa Cape Epic and then last weekend ended off a dominant Old Mutual joBerg2c with a win over the NAD Pro team of Gawie Combrinck and Nico Bell.

“The PYGA guys are probably the team to beat at this year’s sani, along with NAD,” said Woolcock.

“But there are always a lot of other teams that get together just for the sani2c and who I only realise are riding together when I get there and see them on the start line, so you never really know.

“HB and I would like to at least get on the podium this year, but obviously we would also like to win it and I think we have a chance.

“Both of us have had really good form post Epic: I won the TrailSeeker Western Cape Series in Tulbagh at the weekend and the week before HB and I won the Liberty Winelands Encounter together, so our form seems to be there.”

Woolcock has mixed feeling about the changes to the route, particularly what many feel could be the long and tough race-deciding new climb out the Umkomaas Valley on Day 2.

“We did not do the joBerg2c (which includes the three stages which make up the sani2c) so the new climb out the Umkomaas could mean we are at a bit of a disadvantage. I spoke to Darren (Lill), who rode joBerg, and he told me what to expect and told me what the climb is like, but you never really know until you get there.

“But I think from what he said the new climb will suit us. It is a bit more difficult than the old climb by the sounds of things, and we are usually both very solid on the climbs.”