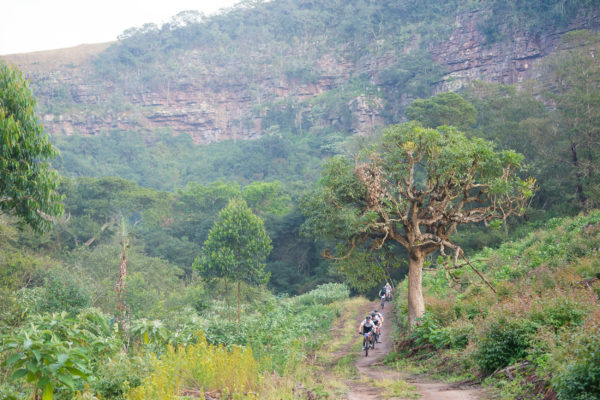 Riders are for some of the most exilerating three days of riding when they take on the 2017 KAP sani2c this week with the Trail beginning on Tuesday, the Adventure starts on Wednesday and the elites take off in the Race on Thursday. Anthony Grote/
Gameplan Media

Himeville – The 13th edition of the famous KAP sani2c gets underway at Glencairn Farm in Himeville on Tuesday as the first of the three events, the Trail, sees over 1500 riders navigate their way to the Scottburgh main beach on the KwaZulu-Natal South Coast.

Entries for the world’s largest mountain bike event are sought after, and getting a chance to ride the famous ‘Farmer’ Glen Haw trails is something that many mountain bikers from the elite racers to the back-markers treasure.

An innovation for the Trail event is that there is no recognition for finishing first. The entire event is geared towards riders who are taking part to have a good time and take part in a race that lacks that overall competiveness.

The three-day race takes the riders from the foot-hills of the Southern Drakensberg, via the first overnight stop 82km away at the Mackenzie Club just outside Ixopo.

Stage 1 of the race has got its fair share of challenges including the famous floating bridge on Mossbank Dam. 2017 will see a duel-bridge meaning that the two-man teams will be able rider across the bridge virtually side by side.

It is still early when riders hit this obstacle and a resultant swim in the dam could be more than a little unpleasant on a cold day with still over half the stage’s riding to go.

The second stage of the event is known as the toughest. The stage consists of just under 2000m of vertical descent with 1500m of ascent. The toughest element of the stage is the ride out of the picturesque Umkomaas valley.

2017 has seen the re-introduction of a climb that will keep every rider honest. Farmer Glen has named it ‘Iconic Climb’ and riders will feel a sense of achievement once they crest the top of the climb before the 32km stretch to the finish at Jolivet Farm.

The final stage of the race is an enthralling 82km dash for the ocean. The 1900 metres of descent, 850m more than the total climbing, means that the route is cumulatively downhill and riders can let their legs go as they sniff the salty Indian Ocean air.

There are still a couple of notable climbs to keep riders honest, but once they pass through the section known as Dave’s Toil the finish line will start beckoning and riders will begin contemplating the exciting 600m long floating bridge across the lagoon at Scottburgh.

There have been a number of spectacular tumbles off the floating bridge and after three days of riding, fatigue plays its part in causing a number of unplanned swims in the refreshing lagoon water.
The relief and sense of achievement on the faces of the riders as they cross the finish line in Scottburgh is tangible, their happiness is a sight that spectators appreciate and respect after 263km of testing riding.

This year is the 13th edition of the KAP sani2c, the world’s largest mountain bike stage race, which takes place from Himeville to Scottburgh.