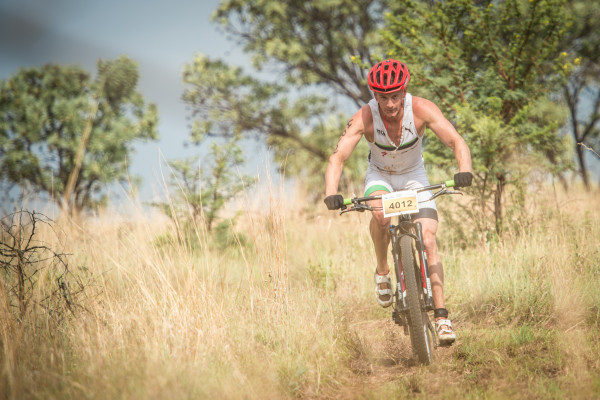 “Coming to XTERRA Buffelspoort as the defending champion, I had high hopes to do well,” says Weiss. “I haven’t been able to swim for the past three weeks due to a muscle injury in my back. As a result I wasn’t where I wanted to be in the swim, losing over 2 minutes to Basson Engelbrecht. To me a 1 minute deficit would be acceptable, but not 2 minutes. I came out of the swim into the mountain bike transition in round about 4th place, but managed to work my way up to 2nd place relatively quickly.”

“It took long before I could get a visual on Basson though,” continues Weiss. “I literally only caught him in the last 3km of the mountain bike discipline. Going into the trail run discipline I only had a 30 – 40 second lead on him. I didn’t think that would be enough. With the trail run featuring a lot of climbing, I knew it would be a strength run instead of a speed run. When I hadn’t seen Basson for a while, I started to take it a little easier as I still need to compete at the Fedhealth XTERRA in Port Elizabeth next weekend. I really enjoyed the route change. Stillwater Sports are always pushing the limits, looking to improve on the previous year’s event.” Basson Engelbrecht came in 2nd, while Antoine Van Heerden finished 3rd.

According to Griffioen, she was also hoping for a better swim. “I’ve trained a lot in the pool and expected to have a better swim. I really enjoyed the mountain bike discipline and managed to catch the leaders. Going into the trail run discipline I focused on holding my gab. XTERRA is definitely the best off-road triathlon. I love the challenge of training for three disciplines.” Andrea Steyn came in 2nd, while Carla Van Huyssteen finished 3rd.

The Fedhealth XTERRA Buffelspoort Full route consisted of a 1.5km swim, followed by a 26km MTB before finishing off with a 12km trail run. Entrants could participate individually or as part of a three member team.

After a gruelling day out on route XTERRA Warriors could regain their strength in the NUUN Recovery Zone. “We were there to put back what the race took out with cold coolers of our proprietary blend of electrolytes in natural, delicious flavours – all without any sugars,” says Etienne du Plessis, CEO of NUUN.

Another special feature in the NUUN Recovery Zone was the serving of the proudly South African ButtaNutt series of authentic tree nut spreads.