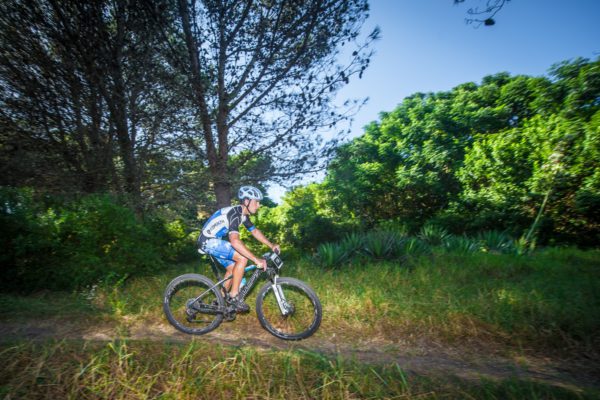 Two of South Africa’s elite XTERRA Warriors, Bradley Weiss and Stuart Marais will face up for the second time in the beautiful city of Port Elizabeth when they take on the Fedhealth XTERRA Nelson Mandela Bay on Saturday, 11 February 2017.
Seen here: Stuart Marais in action at the 2016 Fedhealth XTERRA Nelson Mandela Bay. Photo Credit: Tobias Ginsberg

Two of South Africa’s elite XTERRA Warriors, Bradley Weiss and Stuart Marais will face up for the second time in the beautiful city of Port Elizabeth when they take on the Fedhealth XTERRA Nelson Mandela Bay on Saturday, 11 February 2017.

In 2016 Weiss beat Marais to the finish line with just under 2 minutes to spare. According to Weiss, the ocean swim is a cool and exciting addition to the challenges of XTERRA. “I really enjoyed the MTB leg of this race. It’s relatively short in comparison to other XTERRA races, but it offers so much with fast single track and an undulating course that allows the more accomplished cyclists to take advantage of their strengths. Another highlight is running through Happy Valley and embracing the support of the welcoming PE locals.”

“This will be my first race back after injury,” continues Weiss. “In December last year I fractured my scaphoid bone during a training ride. As a result I missed out on the first XTERRA race of the year, the Fedhealth XTERRA in Buffelspoort in January. XTERRA Nelson Mandela Bay will be my first race back. Although my fitness levels will be back to a competitive point, my goals will be more conservative. I am hoping to be in the mix right until the end.”

Weiss will face tough competition from fellow XTERRA Warrior, Stuart Marais. “My goal will be to go as hard as I can for as long as I can. I want to win,” says a determined Marais. “The ocean swim is iconic to XTERRA Nelson Mandela Bay. It creates a unique spin on XTERRA in SA. The mountain bike route features a lot of single track in the middle of the city. The beauty of the course astonished me. My advice to XTERRA newcomers is to take each discipline on its own merit and don’t push too hard at the starts. Surround yourself with people of similar strengths, but most of all just go have fun.”

Next on the XTERRA SA Calendar:

For further information or to enter the Fedhealth XTERRA Nelson Mandela Bay and/or Grabouw visit www.stillwatersports.com