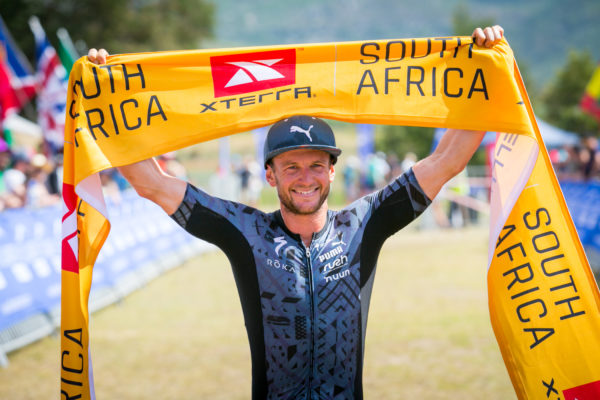 It was a spectacular day for XTERRA racing out in Elgin Grabouw (Western Cape) on Sunday, 24 February 2019 with Bradley Weiss (Stellenbosch) and Haley Preen (Hout Bay) throwing down the gauntlet in the Elite Men’s and Women’s Race respectively in their pursuit of the coveted title of XTERRA South Africa Champion.

“It was perfect weather to race today,” said a very happy Weiss.  “This is my 10th or 11thyear racing in Grabouw and I think this is the best weather that we’ve ever had.  There was no wind, the water was flat and it was cool, a little bit overcast which is great racing weather.  Coming into the race having won the 70.3 South African Championship meant that my form was pretty good.  It’s always tricky switching between road and mountain bike, so I had to do a bit of mountain biking leading into the event.  I still didn’t feel like I’d spent enough time on the mountain bike, but I loved the new course.  It had a lot of climbing and I really enjoyed the new single track sections that were added.  The run was flat and fast, completely different to what I am used to racing here in Grabouw.  I am very happy to take the win and another South African title.

“The swim is always my weakest discipline, but I feel that I had a fairly good swim.  I think I came out the water in 4thplace (in the women’s race),” said Preen.  “I caught Vicky and the leading woman on the first climb on the mountain bike route.”

Preen entered the transition area in first place and maintained her lead on the trail run.  “I had a good run as well,” continues Preen.  “I love XTERRA.  I just love the whole off-road triathlon vibe.  My goal was to make the podium today.  Crossing the finish line in first place was amazing.  XTERRA is the best family event and the mountain bike course is amazing.”

XTERRA WORLD CHAMPIONSHIP:  The XTERRA South Africa Championship kicked off the 2019 XTERRA World Tour.  Entrants stood a chance to qualify for the XTERRA World Championship race, the last in a series of more than 100 off-road triathlon races held in 30 countries and 38 U.S. States.

EXCITING NEWS:  The XTERRA Grabouw (Full Race) also served as a selection race for the 2019 ITU Cross Tri World Championships in Pontevedra, Spain.  In order to be considered for the SA team athletes must be fully licensed with TSA before race day.   For further information please visit:  www.triathlonsa.co.za

Entrants and spectators could enjoy a hot Rialto coffeebefore, during and after the action. XTERRA Warriors could give their all on route knowing that leading Health and Wellness brand, GNC would keep them hydrated in the Recovery Zone.  The team from EPTwas on standby all day ready to massage tired XTERRA Warriors when they crossed the finish line, while Spurensured that entrants and spectators did not go hungry.  All entrants could enjoy a free foot massage in the Falke Foot Zone.