White keen to put past Eston demons to bed in 2015 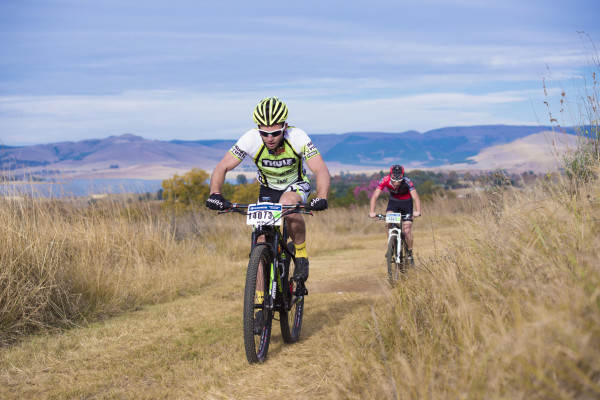 Following some rotten luck in the past and a serious injury earlier in the year Team Thule’s Tyronne White will hope to put past results behind him when he takes to the 60km Illovo Marathon at the 2015 Illovo Eston MTB Challenge at the Eston Club on Sunday 2 August. Anthony Grote/ Gameplan Media

Eston – Following what has been a reasonably long road to recovery, KZN North Coast resident Tyronne White is back and feeling close to his best once more and will be hoping that he can put his past misfortunes at the Illovo Eston MTB Challenge to bed when he sets off from the Eston Club on Sunday, 2 August.

The Illovo Eston MTB Challenge has been a difficult race for White in the past and his 2014 efforts were thwarted by sickness leaving the Team Thule rider hopeful that despite his lack of race time, he will challenge for top honours this weekend.

“I’ve always seemed to have back luck at Eston!” he chuckled. “Last year I had just come off the Imana Wild Ride and was unbelievably sick which was the end of my race.

“Hopefully I am in better shape for the race this year!”

2015 has been a tough year for White who suffered a fracture of his tibia during the Old Mutual joBerg2c April and following his rehabilitation he believes that he is on the right track ahead of this weekend’s Eston challenge.

“My fitness took a real whack after my injury,” he mentioned. “It was unfortunate that I picked up the injury when I did but I have been training hard again and the left leg is starting to get back to where it was before the injury, which is a good sign.”

With the lengthy lay off, the 31 year old managed to get in a good ride over the weekend at the Ashburton Investments National MTB Series event in Ballito and despite some appalling conditions he had a good hit out.

“I raced the ultra in Ballito this past weekend and although I punctured after 60km I was feeling quite good and there were some positive signs for me.

“I am not quite at full race fitness yet but I am looking forward to getting onto the course at Eston this week and there should be some really fast guys out there which will make for an exciting race,” he added.

A chock-a-block schedule looms on the horizon for White and getting the miles in his legs is the most important thing for him currently.

The 2015 Illovo Eston MTB Challenge provides a favourable launching block from White can throw himself at the longer races that dominate his the second half of his year’s calendar.

“This weekend will be a good chance for me to see where I am in terms of my fitness with some of the fast cross country guys expected to be there again this year.

“I have a number of big stage races coming up with Berg & Bush, FNB Wines2Whales and hopefully the Bridge Cape Trek Pioneer so Eston will definitely be a good chance to gauge just where I am at this stage ahead of my preparations for those longer assignments.

“Another focus for me will be the last few races in the Quattro ROAG Series. I’ve lost a bit of ground there due to my injury so I want to try and get in as many of those races as I can!” White mentioned.

The conditions for this weekend’s race look positive and with some appreciative rains over the past weekend, White expects the course will be in great condition come Sunday.

“I have had fun on the course in the past and I am sure following the rain the course is going to be really fast this weekend!

“There are a few climbs early that might split the field but the cross country guys are definitely going to be the ones to watch out for.

“The distance of the race is perfect for them so we will have to keep an eye on them throughout,” White said cautiously.