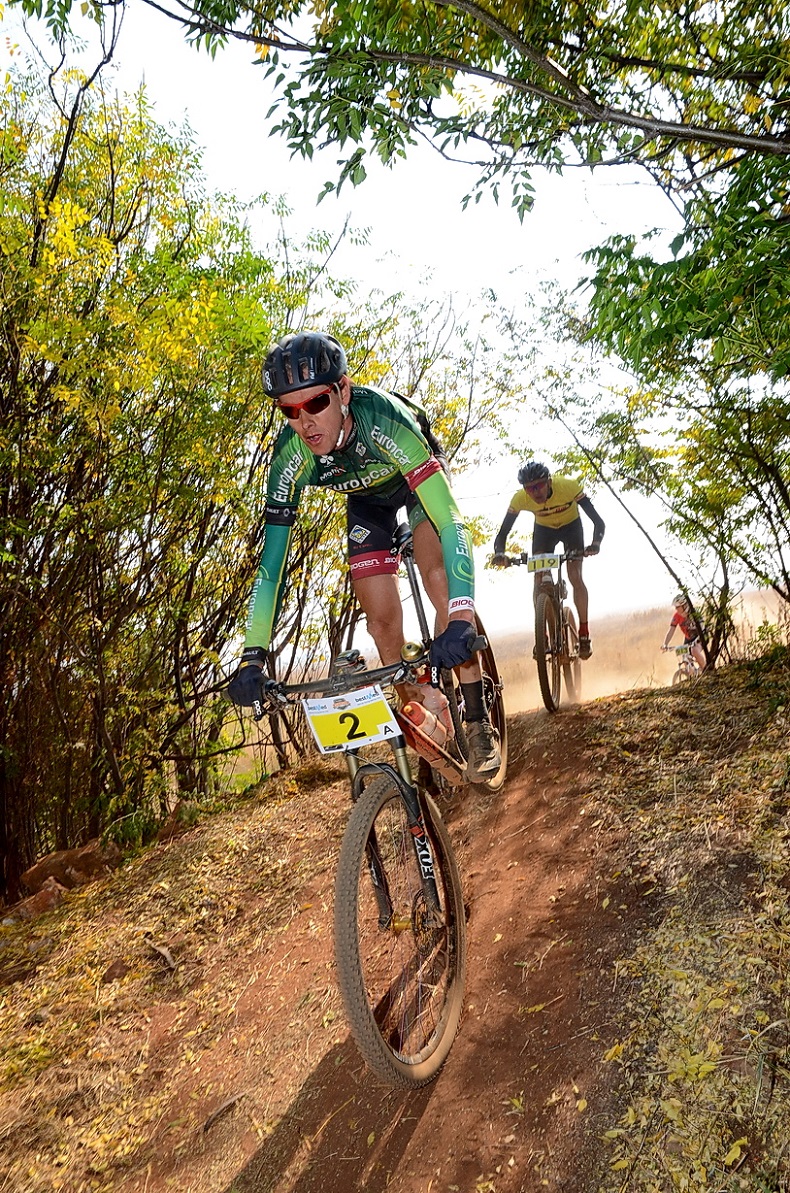 Nic White (front) took the victory in the first ever 80km ultra-marathon at the Bestmed Walkerville MTB Classic, presented by ASG, in Gauteng on Saturday. Photo: Jetline Action Photo

Nic White showed his enduring class in a testing two-man sprint to take the victory in the first ever ultra-marathon at the Bestmed Walkerville MTB Classic, presented by ASG, in Gauteng on Saturday.

The 80km race kicked off the mountain biking component of the new Bestmed National Cycling Series, putting ex-African road champion White at the top of the leaderboard.

He bested Alasdair Garnett to claim line honours at the Boswell Wilkie Circus grounds in Randvaal in 2:36:37 with Andrew Westaway finishing a distant third in 2:40:35.

White, who rides in the colours of Team Europcar SA, said he was delighted with his performance after winning the Winter Fast One earlier this month.

“I came here today to make a good fast race, so I’m quite pleased to be able to have won.”

He said headwinds and a flat and unfamiliar route had kept the racing together near the start.

Getting off the road and into the tracks, White rode off the front to stretch the field out.

“We started to climb up towards the hillier parts of the route, so I forced the pace a little bit and some more gaps formed.”

White attacked again and got away, with only Garnett able to come across to him.

“Out on the district road, with a bit of wind from the front, we put a big dent into the rest.

“We established our gap there, within the first 20 kilometres, and held it for the rest of the race.”

Working together, the two used slipstreaming to maximum effect on the fast and flattish route to put more time into the chasers.

White, who hails from Parkview in Johannesburg, said he had ridden the various incarnations of the shorter 60km Walkerville route many times in the past but not competitively.

“The 80-kilometre distance is quite useful. It’s not highly technical or overly hilly, so the guys can go faster.

“It was still challenging and wasn’t an easy ride by any means – there were some tricky bits. It was testing.”

The 41-year-old now turns his attention to the veterans’ race at the national marathon championships at Van Gaalen in two weeks’ time.

“It’s a very different style of route to what we raced today.

“I haven’t done one before but I’ve got pretty good form after the Epic and sani2c, so I hope to have a nice race there.”

Michelle Beetge was the definitive women’s ultra-marathon winner in a time of 3:10:52.

She was followed home by Catherine Tasseron-Meyer in 3:13:01, with Victoria Myburgh rounding out the podium in 3:14:48.