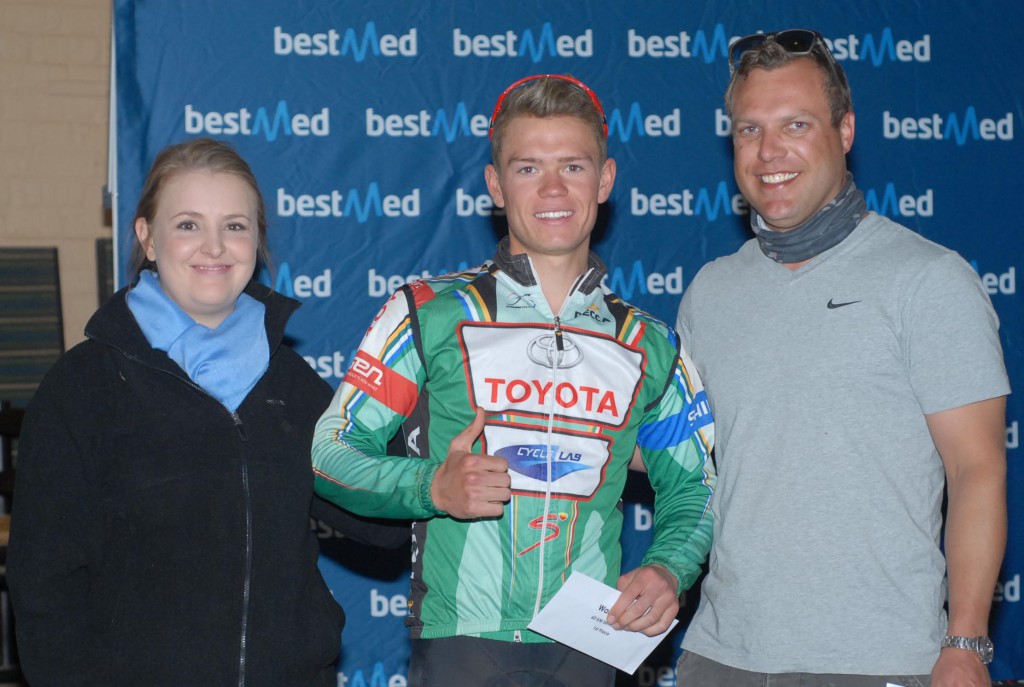 Two-time Momentum 94.7 Mountain Bike Challenge winner Kallen Williams showed himself to be one of South Africa’s rising young talents when he claimed his first ever win at the Bestmed Walkerville Mountain Bike Classic in Gauteng on Sunday.

The former Toyota Cycle Lab rider slew mentor Andrew Mclean in a finishing sprint battle to take the 60km title by a single second in 2:20:20. Greg Anderson was third across the line at the Walkerville Showgrounds in 2:20:42.

Williams, who is currently in his third year of optometry studies at the University of Johannesburg, said racing conditions were far milder than he had anticipated for what was billed as Gauteng’s coldest off-road race.

“That certainly made things a lot easier on the body. Today I was feeling pretty good, so I went hard from the beginning.”

The 21-year-old pushed the pace from the start, opening up a gap of at least a minute over the Platberg climb.

He held the chasers at bay until the halfway mark, when he saw a breakaway group of three riders attempting to reel him in.

“The last half of the race is quite flat and windy, so to stay away by yourself is a lot harder,” said the Alberton resident, who trains regularly in the area.

“So I just backed off and waited for the other three to catch up.”

The four riders worked together over the remaining kilometres until Williams launched a series of attacks in the closing stretch.

“I started making a couple of moves about 5km out and eventually there was just the two of us (Williams and Mclean). I’ve raced against Andrew before, so I was confident that I could take him in the sprint.”

As a former roadie, Williams said he knew he could respond quickly in the sprint and that his background in competitive motocross would stand him in good stead on the speedway circuit leading up to the finish.

While his studies remained his primary focus, Williams said the result was encouraging and he was looking forward to attempting a hat-trick at the 94.7 Momentum MTB Challenge later this year.

In the women’s race, cross-triathlete Sylvia van Tromp showed her off-road mettle to take an uncontested win in 2:51:02.

Runner-up Ronel van Straaten trailed her home in 2:57:21, with third-placed Jana Jonker a further seven minutes back in 3:04:15.

A delighted Van Tromp said she had merely intended to ride the race as part of her preparations for the ITU Cross Triathlon World Championships, which take place in Zittau, Germany, next month.

“I really didn’t go out intending to win today, I just wanted to see how my training was progressing and to test the legs,” said the Sasol Cross Tri Series winner.

“But I rode as hard as I could and was alone for most of the race.”

The Vanderbijl resident, who also placed third at the African cross tri champs in May, said she was very excited to be representing her country internationally.

“It has taken me 35 years to finally get my elite Protea colours!”

For more information on the 17th edition of the event, which was presented by ASG, find the race on Facebook or follow @WalkervilleMTB.