Williamson fired up for nine-day joBerg2c 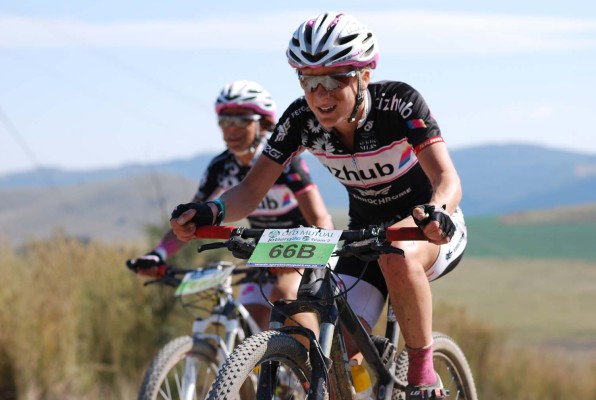 The versatile Brit, who will ride alongside Johan Labuschagne, said she was fired up for the nine-day event that stretched over 900km from the Highveld town of Heidelberg to Scottburgh on the KwaZulu-Natal coast.

Outlining her change of focus, the 34-year-old from north Yorkshire – who will be riding for The Bicycle Company-Mitas team – said she was looking forward to the strong competition in the category.

“There has always been a strong mixed field at joBerg2c and so the organisers have put more emphasis on this category. Though it makes for a harder week, it’s much better to race in a competitive category.”

The organisers have announced that mixed teams will receive equal prize-money to men this year due to a sponsorship from commercial law firm Lanham-Love Attorneys.

Williamson has a fair amount of experience in mixed racing having podiumed in the joBerg2c, Berg and Bush and Cape Epic

“Johan has a lot more experience in the mixed category, so what he says goes. He managed the Sasol team last year and is the reason I’m still racing in South Africa.

“He is a very strong partner. He can drive the group along the flat and is also good to follow on the descents.”

While the pair will be looking to contend for the title, Williamson offered a note of caution.

“We obviously want to race as hard as we can but, as with any stage race, there are many things that can go wrong. So it’s best to go in there with the intention of enjoying the experience, while racing to your best ability.”

Williamson’s attitude is indicative of her philosophy towards the joBerg2c.

“It has always been my favourite race on the calendar. I have missed one with a broken leg and it was the most depressing nine days of my life.

“Racing for me isn’t just about the outcome and the result, it is about the memories you take from each race, the friendships you make, the scenery and the atmosphere in the camp.

“joBerg2c ticks all the boxes for me, plus it’s long enough to be totally exhausted by the end, which is always a nice feeling.”

Williamson has spent the last few weeks at home to prepare for the cold starts.

“I’ve stayed on the road to get a bit more speed in my legs for the flatter stages, plus the fact that any off-road training in Yorkshire at the moment requires a snorkel.”

She said she was pleased with the route changes, which includes a shortened day four and an entirely different sixth stage.

“Each year the route is slightly different, which is great. There is more single-track every year and while I haven’t looked into each stage in detail, I’m sure the tweaks will be for the better.

“I love the fact that joBerg2c traverses such different landscapes. From the flat farmlands to the mountains and then finally arriving at the coast feels like a real journey.”

Williamson regarded American Sonja Looney and Japan’s Yuki Ikeda as one of the teams to watch.

“I think Sonja and Yuki will be very strong together. I have met them both – Sonja in Mongolia and Yuki in Canada. They have tons of stage race experience and I regard them as two of the best in the world.”

Another team sure to be in the mix will be South Africans Grant Usher and Amy Beth McDougall. The Lanham-Love Valencia pairing placed second and first respectively in the inaugural Munga.