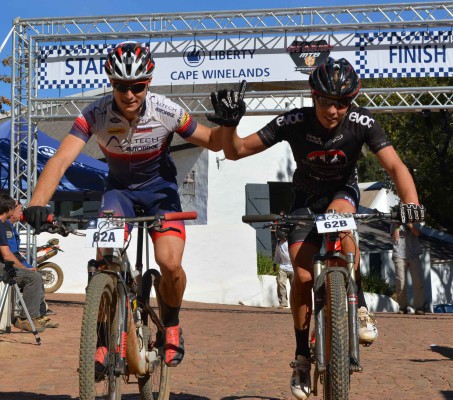 The Altech Autopage duo took the debut honours in the 175km Western Cape race in a combined time of 8:13:41.

Flandria grand masters Eben Espach and Linus van Onselen finished second in the general classification in 8:58:29, with the SDK Legends pairing of Rikus Visser and Divan Koch rounding out the podium in 9:16:29.

Pretoria Box U23 riders Mitchell Eliot and Neil Robinson, who grabbed the runner-up spot on days two and three, had to be content with fourth place overall after technical problems created an insurmountable time gap on day one.

“We came in wanting to win and managed to do that, so that’s fantastic,” said the 26-year-old.

“Coming into this event, we heard that it was more of an experience than a race, but the moment the guys put on the number boards, it quickly became one.”

Wolhuter said Eliot and Robinson had shown their intent early on the 67km opening stage from the Lanzerac Wine Estate in Stellenbosch to the Le Franschhoek Hotel in Franschhoek.

“We kept the racing together until the base of the first climb and then we broke away and went up there with the Pretoria Box guys.”

Wolhuter said he and Haley had managed to get a gap over the top of the climb and extended it on the Skyfall singletrack that followed on the Bartinney lands.

“There was a headwind all the way to the finish, so we just rode a good tempo that opened up our lead.

“Unfortunately, Mitchell and Neil had a lot of technical problems which ultimately took them out of the running.”

Seeing what could happen, Wolhuter and Haley decided not to take any unnecessary risks and consolidated their lead on the 53km second stage from Franschhoek to Doolhof Wine Estate in Wellington.

The two took advantage of a strong tailwind to cover the first 30km in an hour and give themselves more time on the rockier, tougher mountain trails after the Drakenstein Prison.

“We had quite a nice lead coming into the third stage, which took place on the Welvanpas trails around Doolhof.”

Wolhuter said he and Mowbray resident Haley were both familiar with the 55km circuit near Wellington and knew how to approach it.

“It’s quite technical here, especially in the last 10 kilometres where there are a lot of sharp rocks.

“We rode quite a decent tempo off the start and got away easier than I had anticipated.”

Former downhill racer Haley took the lead into the technical singletrack sections and showed his technical abilities over the climbs, while Wolhuter drove the pace on the flatter stretches to secure an unassailable lead.

Wolhuter, who raced for the Stan’s NoTubes road team in the United States of America during the 2013/14 season, said he was happy to have found mountain biking success again on home soil.

“We’ve had a slow start to the year, been close to the podium for some of the bigger races but just missed them, so it’s fantastic to win again.”

He said the Cape Winelands race had been the right combination of a challenging ride and a five-star experience.

“I think the first edition went off really well, there were some fantastic trails and it’s got the potential to grow very nicely.”