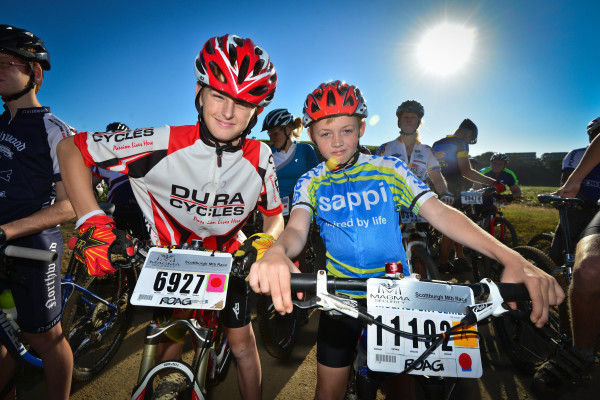 Young and old alike are all set for another great day in the saddle at Sunday’s Sappi Scottburgh MTB Race. Darren Goddard/
Gameplan Media

Scottburgh – KwaZulu-Natal’s South Coast is all set to welcome an influx of mountain bikers from all corners of the country this weekend when the 2015 Sappi Scottburgh MTB Race takes place on Sunday, 9 August, with special emphasis being placed on celebrating Women’s Day at the popular event.

The large female contingent will lead the field out through the neutral zone from Scottburgh Main Beach to the start at Renishaw sugarcane farm before occupying the front row of the grid on the start line.

A special gift will be handed to all female finishers at the finish line while a novel Women’s Day Acoustic Celebration will see local band The Kickstands, together with Home Bru’d and Freddie NL, performing from 1pm at the Blue Marlin Hotel.

Before then though, the racing promises to be action-packed throughout as riders tackle the 45km Sappi Scottburgh Classic, 28km Dash & Splash and 10km Fun Ride.

Both the 45km’s elite men’s and women’s clashes will see fresh faces on the podium after Team Thule’s Tyronne White and Specialized SA/Bell Equipment’s Hayley Smith recently confirmed they will not be on this year’s start line.

‘After last week’s Illovo Eston MTB Challenge I realized that in an effort to get back to full fitness after my injury, I have unfortunately overcooked my training a little bit and so I need a bit of a week off,” explained White.

“I will sadly have to step down this year and give someone else the opportunity to challenge for the title,” he added tongue in cheek.

In the women’s race, the doorway has been opened for a new name to be added to a race winners list that already includes the likes of Team RECM’s Cherise Stander, Red Bull/Specialized SA’s Bianca Haw and Smith herself.

The run of local ladies claiming hometown honours may however still continue as Scottburgh local Candice Parker-Dennison looks to overcome the challenge of riders of the calibre of Cindy Theunissen and Kathryn Fourie and claim the spoils.

The shifting of the Thule King of the Mountain to later in the race will add another point of intrigue as the racing snakes battle it out two-thirds of the way into the contest for the hotspot prize while the J&D Scaffolding platform over the lagoon and the Chep SA walkway add a new dimension to final kilometre.

The 28km outing promises to be another challenging yet rewarding day in the saddle and the younger members of the family will enjoy their piece of the action during the 10km challenge while those not quite ready for the occasion will be well looked after in the Halfway Toyota Kids Zone.

The weatherman suggests conditions will be close to perfect with clear blue skies, moderately warm temperatures and a gentle breeze forecasted for the morning.

As expected, a large South Coast contingent is busy gearing for Sunday’s action with participants from Amanzimtoti, Margate, Umtentweni, Port Shepstone, Umzinto, Umkomaas and Scottburgh itself while cyclists from Durban, the North Coast, Pietermaritzburg and Underberg complete a full representation for the host province.

Word of the event’s pedigree has however stretched beyond KZN’s borders as well with riders set to make the journey from Gauteng, Western Cape, Eastern Cape and Mpumalanga to Scottburgh for the occasion.

Sunday will be particularly special for Marius Janse van Rensburg of Amanzimtoti who celebrates his 41st birthday at the race while others hope to celebrate for a different reason as they eye out their share of the prizes that include cash, stays at the Cutty Sark and Blue Marlin hotels, products from Cadence Cycling Durban North and Funky Pants as well as a new bicycle from Bobby’s Cycles.

The 2015 Sappi Scottburgh MTB Race takes place on Sunday 9 August. Food and drinks will be available for purchase at the race venue and more information can be found at www.facebook.com/pages/Scottburgh-Mtb-Race/221420711386243?fref=ts