Women’s Race Hots Up at the Cape Pioneer Trek 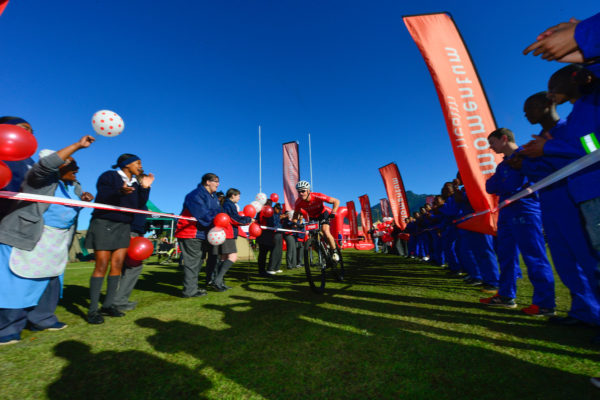 Carel Bosman, of Momentum Health, takes to the Saasveld Singetrack time trial route on Wednesday the 18th of October, during the Momentum Health Cape Pioneer Trek, presented by Biogen.

The sun came out for the first time during the 2017 Momentum Health Cape Pioneer Trek, presented by Biogen, and under blue skies the Team Ascendis Health women raced to stage victory on the singletracks of George. Stage four, a mid-race time trial, was won by The Spur/Red-E combination in the UCI men’s category to extend their general classification lead; on Wednesday the 18th of October.

The 31 kilometre time trial route included a vicious 720 metres of climbing, with a long jeep track drag to the highest point of the day accounting for much of the altitude gained. While the singletracks were tucked away under the canopy of the pine plantations, the jeep tracks ran through clearings and as a result the jeep tracks had received a lot more rain. The weather and heavy forestry machinery worn roads were littered with pot holes – these were in turn filled with muddy water – some of which proved far deeper than riders expected.

The UCI women, set off an hour earlier than their elite male compatriots. This meant that the trails they raced across were less rutted, but the route still provided a stern test. The Ascendis Health team of Robyn de Groot and Sabine Spitz were neck-and-neck with Team Spur/Valencia, Ariane Lüthi and Amy-Beth McDougall, at the first time check at the fifteen kilometre mark. “We tried to ride at a consistent pace. It was a real cross country style stage, but with three stages still remaining we could not ride at a maximum cross country style effort” Spitz reflected post stage.

“I started to struggle with my chest on the main climb” an exhausted McDougall said after crossing the finish line. “I had a bit of the flu last week and while I’m healthy now my chest has been closing up a bit. But it is getting better every day and the warmer temperatures definitely help.”

The temperatures will certainly be warmer on stage 5 when the race transitions from the Garden Route into the Klein Karoo via the Montagu Pass. The heat and rocky terrain of the interior will expose any weakness so the remaining 256 kilometres are fraught with opportunities to lose the race. Team Ascendis Health’s victory by 30 seconds reduces the gap between them and Team Spur/Valencia to 5 minutes and 16 seconds; but even a lead like that can evaporate like water under the harsh African sun should one of the leaders puncture or crash.

The UCI men’s race is already a far closer affair – which promises a dramatic conclusion over the next three days – between the defending champions, Nico Bell and Gawie Combrink, of NAD Pro MTB and the young upstarts, Team Spur/Red-E. Despite both teams experiencing a couple of interesting moments they again proved too fast for the other leading men’s teams; KMC Fruit to Go, SPOT Africa and Kelly’s Bikeranch.

“I kind of used Matt [Beers] as a work horse and sat at the back crunching numbers for a lot of the stage. Telling him when to push and when to slack off a bit,” stage winner Alan Hatherly explained. “I’m really happy with how the week has gone so far, with four stage wins from four stages so far. I did not really know what to expect going into the race and I am happy with how my legs are feeling. I think we are well placed for the final three days” the young Team Spur rider concluded; having built up a 1 minute and 33 second buffer by adding a further 30 seconds to their lead on stage 4.

The elite men provided a little added excitement by ploughing through deceptively deep puddles. “Nico had a couple of crashes, but fortunately they were not serious and did not cost us too much time” Combrink began. Picking up the story Bell confessed: “I came into a wet corner a bit fast and slipped out, and then later I underestimated the depth of a puddle. My front wheel disappeared down to the fork and I went tumbling. Fortunately no damage was done.” Hatherly and Matt Beers had a near miss of their own with a similarly tricky puddle. “Alan [Hatherly] clipped his pedal on the side of a really deep puddle. That knocked him across into me and then I nearly crashed. I think the helicopter got the whole sequence so people should be able to see the pros hacking” Beers laughed.

The fifth stage of the 2017 Momentum Health Cape Pioneer Trek, presented by Biogen, is the second journey stage of the event. The route climbs 1 650 metres in its 97 kilometre distance, with the majority of that climbing coming in the first 20 kilometres as the riders take on the famed Montagu Pass. To see how it unfolds mountain biking fans can follow the action live on the event’s Twitter handle, @CapePioneerTrek, from 08:00 on Thursday morning.

In addition to the live coverage on Twitter the highlights from every stage of the race can be viewed on the Cape Pioneer Trek Facebook page and the Dryland Event Management YouTube Channel from 20:00, Central African Time, daily. For more information on the Momentum Health Cape Pioneer Trek, presented by Biogen, please visit www.capepioneer.co.za.

For all the results from the 2017 Momentum Health Cape Pioneer Trek, presented by Biogen please click here.