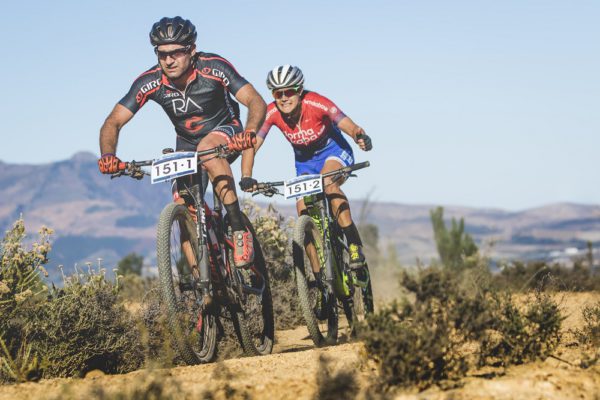 Overnight leaders Waylon Woolcock and HB Kruger produced another controlled performance to create a telling gap after the second stage of the Liberty Winelands Encounter in the Boland today.

The BCX pair used their knowledge of the region – Woolcock is from Stellenbosch and Kruger from Paarl – to build a six-minute lead going into the final stage tomorrow.

They completed the 57km stage from Franschhoek to Wellington in 2:17:21, finishing ahead of Andrew Hill and Marco Joubert (TIB Insurance-Momsen Valley Light), who clocked a time of 2:20:35.

Jurgens Uys and Nicol Carstens (Versus Socks) were third for the second consecutive day, finishing in 2:23:00.

Woolcock said it was not a case of making any significant moves on the day, but maintaining the pressure on their rivals until the climb up Cascade Manor 40km into the race.

“The first 15 to 20km were fairly fast and flat, but knowing the trails pretty well, it was a matter of just keeping up the pace,” he said.

“The guys were on and off us the whole time and we had a gap of about one minute when we hit the big climb of the day.”

He added that they wanted to build up a decent gap going up Cascade Manor to the Hawekwa Plantation.

“We managed to achieve that and still had something in reserve because there have been some fires in the region, which meant we had to be fairly careful on the single-track down to the finish,” said Woolcock.

After riding a large part of the first stage of the Liberty Winelands Encounter, in partnership with STANLIB, at tempo, he said they had been able to ease back even more today.

“You could see that fatigue had set in with some of the riders and I always believe in keeping something in reserve rather than trying too hard and making mistakes.”

Kruger said they were still in good shape, having maintained their momentum without “pushing ourselves into the red”.

Even with a fairly comfortable lead, he said they would not take anything for granted going into the final stage.

“The race is never over and we will definitely have to ride smartly tomorrow,” he said.

“We don’t want to run the risk of any mechanicals and crashes, or get caught at the back on some of the single-track.

“So we will definitely be on our toes and make sure we are up near the front.”

In the mixed category Corne Barnard and Vera Adrian (dormakaba RA) took the day’s honours in 2:37:03.

They were followed home by Matthew Stamatis and Carmen Buchacher (Home Ice Cream) in 2:37:47 and Pieter Seyffert and An-Li Kachelhoffer (Bestmed-Ellsworth-ASG) in 2:44:26.

Barnard and Adrian lead the general classification on 5:04:18, giving them a decent lead over Stamatis and Buchacher (5:09:38) and Seyffert and Kachelhoffer (5:24:50).