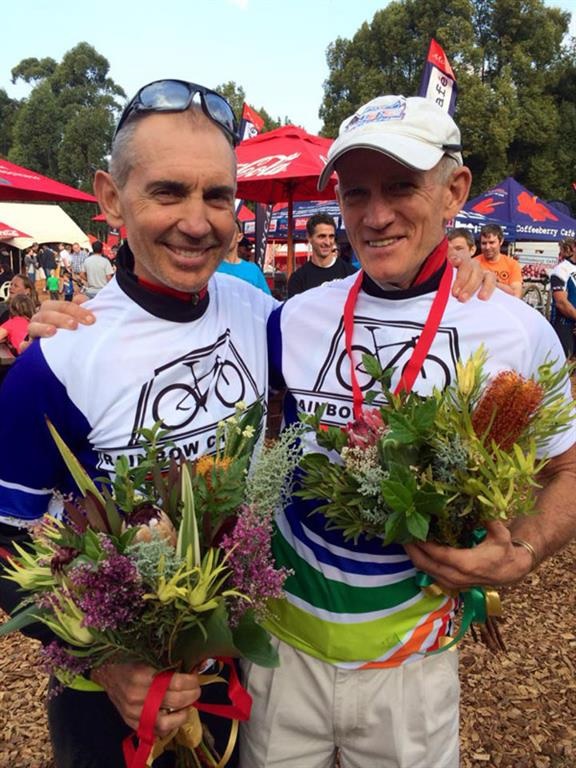 Cycle Lab Supercycling, powered by Toyota club members claimed a total of five medals at the 2014 Rainbow Challenge final, which doubled as the Masters Marathon Mountain Bike World Championships in Pietermaritzburg at the weekend.

McLean’s winning time of 03 hours 54 minutes and 52 seconds was the third fastest time overall on the day, an impressive effort considering the depth of the field among the younger age categories. He was one of only three riders to break four hours on the course, which included over 2000 metres of vertical ascent and which was made more challenging by rain the day before.

“I had a really good ride today. I think knowing the course after riding it at the national champs recently helped in terms of pacing myself, but the conditions were quite different, with mud and damp trails almost throughout the race. I just had to be a bit more cautious at times,” said McLean.

Anderson’s time of 04:07:30 was as impressive as McLean’s on an age scale, as it was the ninth fastest time overall from a field of more than 300 in total. It would have placed him on the podium in all but the 30-34-age category.

Anderson’s win saw him and Furbank swap the positions of the South African marathon championships, held on the same course three weeks before, where Furbank claimed the national title ahead of Anderson.

Diesel’s silver-medal ride was heartbreaking for the national 45-49-year champion. After leading for the latter third of third race, he was passed with 700 metres to go, unable to respond after suffering from severe cramps, and crossing the finish line just 21 seconds behind winner, Arno Daehnke.

Cooke’s bronze-medal winning ride marked his successful return to racing following a forced layoff after he broke his collarbone in a crash while leading the Mixed Category at the Old Mutual joBerg2c in late April.

“Unlike at the national championships, where I virtually died in the last 15km, I was actually strong at the end today and really made good ground. I’m getting conditioned to these tough courses it seems,” smiled De Groot afterwards.