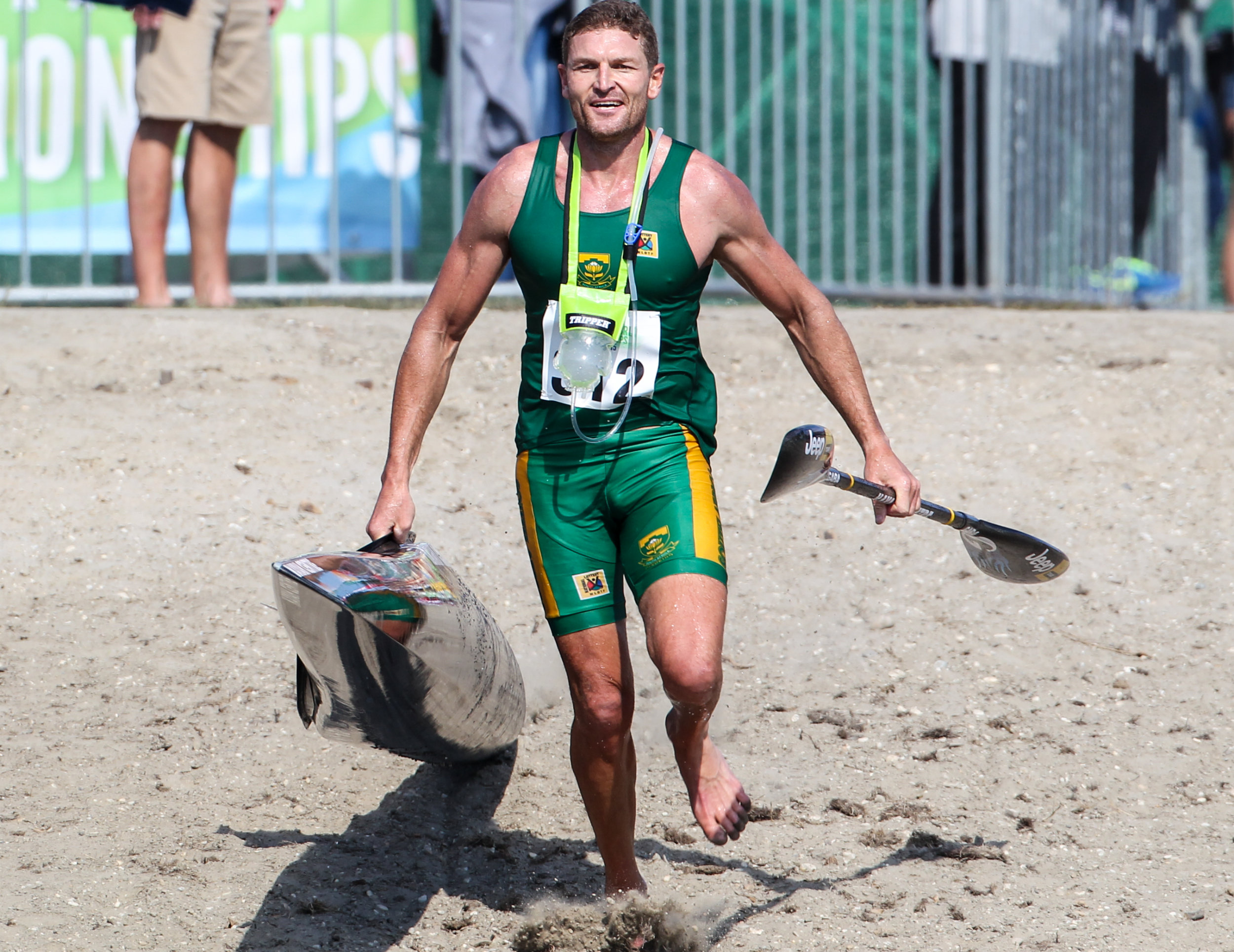 Current Marathon World Champion, Hank McGregor (Euro Steel/Kayak Centre) hopes to secure a top two finish at the 2016 South African Marathon Championships sponsored by Prescient at Zandvlei, Cape Town this Saturday in a bid to qualify for this year’s World Champs and a shot at defending his global crown. Balint Vekassy/
Gameplan Media

While the battle for the year’s national crowns at the Peninsula Canoe Club hosted event will be fierce across the spectrum, from guppies through to masters, much of this weekend’s focus will be on the World Champs age groups – senior (K1 and K2), Under-23 (K1 only) and Under-18 (K1 and K2).

The senior men’s K1 clash is set to be the race of the weekend as six time Marathon World Champ Hank McGregor, former U23 World Champ Andy Birkett, 2014 K2 World Champ Jasper Mocké and former U18 World Champ Brandon van der Walt – amongst others – go head to head in the mouth-watering duel.

Euro Steel/Kayak Centre’s McGregor and K2 partner, Mocké (Euro Steel/Mocké Paddling) will be eager to continue their rich vein of form having recently returned from ocean racing in Hawaii having finished first and third respectively at the renowned Maui Jim Molokai Challenge.

The pair will however have to dig deep if they are to shake the effects of the event’s strenuous travel itinerary while having overcome a competitive field that also includes Stu Maclaren, Greg Louw, Dawid Mocké and Czech Republic ace Jakub Adam.

“My focus has been on surfski for the past little while but I chatted to Jasper and we agreed to give SA Champs a go once we’d got Molokai behind us and see if we can make the SA team for Worlds,” explains McGregor.

“Jasper and I are nowhere near being at our marathon best and some of the other guys like Brandon, Jakub, Stu and Andy, who have been purely concentrating on marathon racing recently, I’m sure will be in great shape.

“It should be super competitive this weekend and with it being a once off trial for Worlds and only two spots available on the SA team, we’ll just have to see how it goes on the day this weekend; hopefully I can make the team so I can try defend my world title,” he added.

On the contrary, defending South African champ, Birkett (Euro Steel) has enjoyed a sound build up to this year’s nationals while Van der Walt (Euro Steel/Set Kayaks and Composites) has shown sublime form on Western Cape waters in recent weeks and will be determined to mix it up at the front.

The senior women’s K1 affair will be a battle between Cape local Bianca Beavitt (Pink lady/Century City), Nicole Russell and Jane Swarbreck while double U23 World Champs bronze medallist Jenna Ward will be looking for a strong showing in the U23 national clash as she looks to challenge for the age group’s world title in Germany in three months’ time.

Former K2 World Champ, Jean van der Westhuyzen – in his final year as a junior competitor – will be relishing a shot at this year’s national crown as well as hoping to overcome the challenge of Mark Keeling, Bailey de Fondaumiere and Hamish Lovemore in order to ensure his Worlds participation.

2015 World Champs surprise package, Kyeta Purchase – who claimed an impressive fourth place at her maiden Worlds outing last year – comes into the weekend as strong favourite to take the U18 K1 girls crown.

Sunday’s K2 programme will again be a hard-fought affair in the senior men’s clash as McGregor and Mocké take on Birkett and U23 youngster and former World Champ at age group level, Louis Hattingh as well as the Van der Walt/Maclaren and Adam/Simon van Gysen combinations.

With work commitments having limited the time she has been able to spend training recently, Abby Solms was forced to choose between the K1 and K2 clash and her commitment to Rio’s Olympic Games hopeful Bridgitte Hartley some time back sees the pair focusing their efforts on the doubles contest.

“There is just nowhere to hide in marathon racing and given how little time I’ve been able to train lately, I had to make a choice and Bridgitte and I decided a while ago that we’d do K2 together so we’re looking forward to having some fun together on the water this weekend,” said Euro Steel/Natal Canoe Club’s Solms.

While the Solms/Hartley pair won’t be available for selection for the global clash in September, Ward and Purchase will be and the two young stars will be hoping they can continue to build their impressive partnership together and kick on from their remarkable senior women’s K2 fifth placed effort at last year’s Worlds.