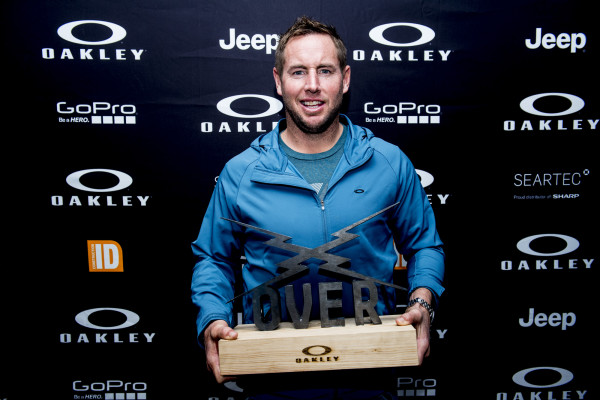 Competing in the tournament will be a selection of top Oakley athletes as well as one lucky member of the public. The event is set to run for two days during the JBay Winterfest, 9 – 10 July, and will take place at the Impala Ranch MTB Trail, The Links Golf Course, and the Lower Point in JBay. In a major announcement from Oakley Sports Marketing Manager and X-Over founder Seth Hulley, Australian surfer Tom Whitaker has been announced as the event wildcard. Tom, affectionaly known as ‘Whits’ is a former World Surf League Championship Tour athlete, who enjoyed 8 years competing at this top level. Tom is currently an Oakley coach/mentor, but still competes on the World Qualifying Series and is currently rated 21 on the series.

“We’re very stoked to have Tom onboard for the Oakley X-Over,” said Hulley. “He is fit and so competitive, and will definitely give the boys a serious run for their money.”

When he heard the news, Whits was equally excited at his inclusion. “I am honoured to be invited to the X-Over,” said Whits. “It’s game on. I won’t back down from a hard ride in the mountain bike event, nor will I shy away from the golf nor the surf contest.”

The other exciting news to break is that the public entrant has been announced. The competition to get a slot into the event was an online contest in which a member of the public had to show his Obsession with the #Oneobsession campaign. Participants were encouraged to upload images of themselves strutting their X-Over stuff, and Wihann Kotze was the best example, posting images of himself playing golf, mountin biking and surfing, and won the slot to compete in the Oakley X-Over 2015.

Oakley Sports Marketing Manager Seth Hulley was the person who conceptualised the competition, and is proud to once again present it during the JBay Winterfest. “Last year the event was a resounding success for everyone involved,” said Hulley. “We’re looking forward to an exciting event this year with a few fresh new faces and more fun and excitement planned.”

Bob Skinstad, Butch James, Dale Steyn, David Miller, Greg Minnaar, John Smit, Jordy Smith, Kevin Evans, Ruan De Smidt, Ryan O’Connor, Raynard Tissink, Garret ‘Soldier Boy” McLellan and Ryan Sandes are all returning to the competition, while Lance Isaacs and Dale Steyn are the new faces. There is also going to be one member of the public invited to compete in the event via the Oakley South Africa Facebook Page.

Last year was an incredible event, with Butch James crowned the inaugural Oakley X-Over champion. He had the highest combined score over the three disciplines, and snatched the trophy from Raynard Tissink in second and Greg Minnaar in third. Butch will be back in the thick of it to defend his title this year, but he’s going to have a tough time doing it. New faces Lance Isaacs and Dale Steyn are both keen to impress in what will be their rookie performances, Raynard and Greg will be pumped to get to the top of the podium, and Garreth ‘Soldier Boy’ McLellan is determined to improve on his 12th place position last year.

Bobby Skinstad was one of the athletes who were in the thick of it from the start in 2014, and will be gunning for an improvement. Bob had a third in the surfing event, and a fifth overall, and has his heart set on a top three finish this year. “This is the year that I hope to do well,” said Bob. “The Oakley X-Over is one of my favourite events of the year, and it ‘s always good to hook up with all the mates and go surfing, but I am keen for a good result this year.”