While waiting wetsuitless in the shallow water for the start of the 2016 Xterra SA champs in Grabouw, I realized once more, if you’re built like a freshly plucked chicken, you should not swim. Everything is the wrong way round. I know that, because I am built like a chicken: no chest and massive thighs. Lots of drag. And on this day my only saving grace, the use of a wetsuit, was not allowed either. The 22,1 degrees water temperature was apparently too warm, as opposed to the wetsuit-legal 22 degrees. Seeing swimmers like Ryk Neetling, ex-Olympic swimmer and all the other elites around me, reminded me once more how polluted the gene-pool was when I got my swimming ability. 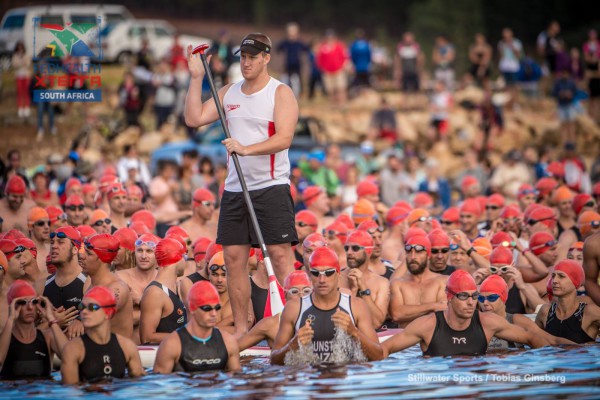 Another thing, only the winner of the each age group gets a trophy. No trophy for 2nd or 3rd. So it’s game on! Paddy Murphy, good friend and main rival for title in my age category has a 1,5 Km swim PB of under 19 minutes, while two weeks back at the Cape Mile swim, I managed 38 minutes for 1,6 Km. And trust me, nothing changes much in two weeks. In my mind I accepted that my destiny would be 2nd place at best. I’ve never beaten Paddy at Xterra Grabouw, and unlike some motivational mantras that teach otherwise, I sometimes do accept defeat before the race has started. Be smart. Don’t be like me.

The start hooter went and we were off for the swim. I previously read that pretending to pinch a coin between your buttocks while swimming helps elevating dragging legs. If Jan van Riebeeck was still on the coin, he would have had tears coming out of his eyes, so hard I pinched my coin for 31 minutes and 21 seconds. I was elated to exit the water in that miserable time, but Paddy, with a 23-minute swim, left me with a deficit of almost 9 minutes. I tore off my skin suit and ran into T1 flashing my Endurohub regalia.

I raced my bike as hard as possible for the same reason I used to stand in front of the queue when lined up for a caning in school. I wanted to get the pain over and done with. After a million rocks, drops, bottle-necks and waterbottle chokes, I found myself exiting the infamous “rock garden” unscathed. With only 5 km to go, I noticed an athlete with a very familiar pedal-stroke in front of me. Lo and behold, Paddy it was! I gathered speed to play a “psych-out” card and charged past Paddy shouting “Attack…attack!”. After sharing a good laugh, I pretended to put the hammer down. With less than 5 km left, I had to put as much daylight between me and Paddy as I could. In bike terms, only a minute or two was possible. I passed Paul Ingpen, bantering about how much I was looking forward to his Warm Water Triathlon weekend and after 1 hours and 35 minutes of serious mountain biking, I charged into T2 for the run leg. 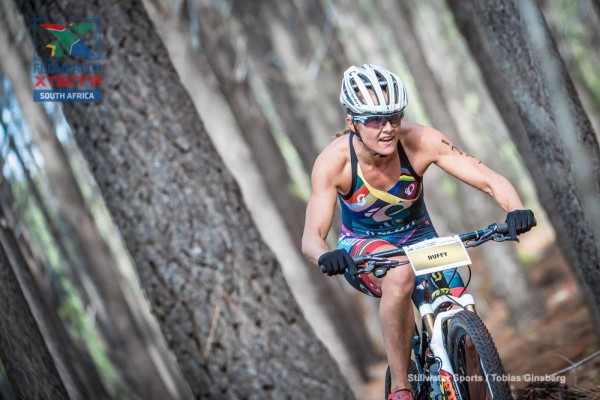 My main aim was not to let Paddy catch sight of me on the run, denying him the chance to work out a catch-up strategy. I was running scared for 12 agonizing kilometers. Severe cramps had me walking at one point and I thought: “Is this how my day is gonna end?”. Thankfully Marius Hoon, running with me, helped by urging me to lengthen my strides to stretch out the muscles. While running the last kilometer down the Eikenhof dam “beach” to finish in a total time of 3 hours and 17 minutes, Paddy was not in sight and I could breathe. Victory could be mine, unless another athlete in my age group finished ahead of me. 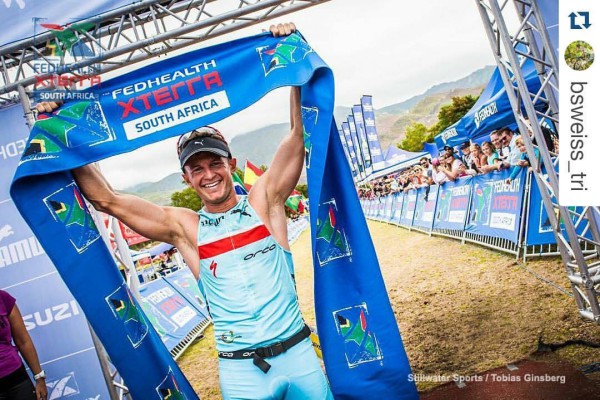 Bradley Weiss taking the SA title, living up to the promise he made a year ago.

On this fine day, every competitor’s achievement was special. I was lucky to know of a few, like Matt Daneel finishing 15th overall after a year of injuries and surgeries, Martha Thom reclaiming her podium status after becoming a mom, and para-triathlete Chris Wagner swimming with me, stride for stride. Just as uplifting was the awesomeness of the superheros of the game, like Flora Duffy for coming 7th overall in this off road tri, just to take on the likes of Gwen Jorgensen at the next ITU road tri. Classy! James Cunnama, Ironman star, obliterated the field to claim 2nd place at his first Xterra race. The big show came from hometown hero Bradley Weiss, making good on his promise a year ago to win the Xterra SA title at Grabouw. Even better – winning his 4th Xterra pro title in 5 weeks.

As for me, I am still fighting for a happy childhood, so going home with that age group trophy meant a lot. Whatever everyone’s dreams or goals were on the day, a big thanks to Stillwater Sports, all the sponsors and every person involved for delivering the biggest and best Xterra in the world (except for the no-wetsuit swim). The Xterra Knysna in June is coming up, and after that, come join the Xterra family at Buffelspoort, Port Elizabeth and Grabouw in 2017. See you there!