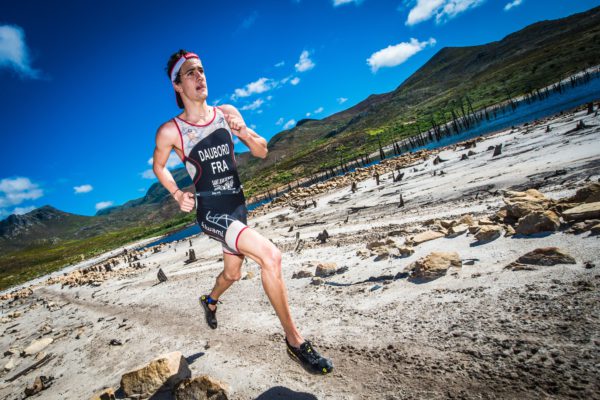 Returning to the majestic Grabouw Country Club the weekend of 24 – 26 February 2017, the Fedhealth XTERRA South African Championship has attracted the attention of a strong field of elite off-road triathletes, both locally and from abroad.
Seen here: Brice Daubord (France) in action during the 2016 Fedhealth XTERRA South African Championship. Photo Credit: Tobias Ginsberg

Returning to the majestic Grabouw Country Club the weekend of 24 – 26 February 2017, the Fedhealth XTERRA South African Championship has attracted the attention of a strong field of elite off-road triathletes, both locally and from abroad.

Reigning XTERRA SA Champion, Bradley Weiss obliterated the field in 2016 with his impressive finishing time of 02 hours 30 minutes 42 seconds. Since this victory Weiss has placed first at XTERRA Philippines and second at the XTERRA Asia Pacific Tour. “XTERRA Grabouw is the largest XERRA in the world with one of the most demanding bike courses,” says Weiss. “The field is always deep, providing great competition and a very close and exciting race. I will be there to defend my title. Richard Murray has been one of SA’s best triathletes for the past few years. I believe he will bring the biggest challenge as well as Stuart Marais who won the title in 2015, but sadly missed out in 2016 due to illness.”

Stuart Marais is looking forward to hard off-road racing. “I would like to win,” says Marais. “With XTERRA Grabouw attracting the cream of SA triathlon, there are a number of athletes who will be able to challenge for the overall win.   The number of international athletes entered is testimony to the quality of the event that is hosted by Stillwater Sports. It’s great to have strong competition. Hopefully I will be up to the challenge.”

Brice Daubord (France) is ready for his second attempt at the SA title. “Due to a mechanical problem on the mountain bike course I did not finish the 2016 XTERRA Grabouw,” says Daubord. “My goal is to enjoy the event before, during and after the race. I am hoping for a top eight finish and expect tough competition from local, Bradley Weiss and my two friends Kris Coddens (Belgium) and Francois Carloni (France).”

According to Jan Pyott (Switzerland), the XTERRA SA Championship in Grabouw is his favourite race. “The course is stunning. It features a bit of everything – it’s flowing, technical and scenic. The people in and around the race make it very special.”

Kris Coddens (Belgium) is looking forward to his XTERRA SA debut. “I am a school teacher by profession. This is the first year that the event fits in with our school holiday. The beauty and grandeur of XTERRA Grabouw is iconic. I am hoping for a podium finish.”

The Prize Purse for the Fedhealth XTERRA Grabouw has increased to a whopping R154 000. The top five finishers in the XTERRA Full open men’s and women’s races will receive prize money, with the first place winners each taking home R30 000.

Forming part of the XTERRA World Tour, athletes taking part in the Fedhealth XTERRA Grabouw stand a chance to qualify for the XTERRA World Championship that will take place in Maui later in the year.