Young athletes show their talent at the 1st TINMAN event 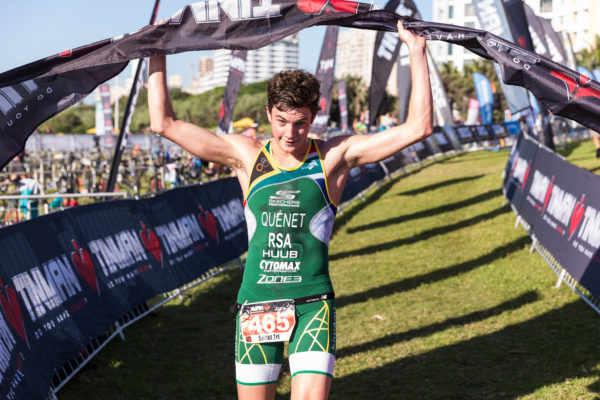 Ideal racing conditions greeted the athletes at the 5am registration (flat sea/no wind and warm temperatures) with 600 athletes of all shapes, sizes and ages converging on the grass lawns at Suncoast Casino ready to start the 2017 TinMan Tri Series.

Racing got underway with the 10km flat run followed shortly by the Rookie Triathlon. The rookie triathlon attracted many a 1st timer with the youngsters going hammer and tong to get across that finish line. The Rookie TRI is essentially the feeding block for the future of triathlon in SA and judging by the large turn-out, we have some great talent that will come through in a few years’ time. The sprint race got underway shortly thereafter with Nic Quenet from the WP putting down the hammer on the swim over the 600m distance coming out ahead of the chasing field. On the ladies side, it was his sister Alexander Quenet that led them out the water with the KZN duo of Amber Schlebusch and Tegan Gore close behind.

The Challenge race was the last event to get underway with old timer, Glen Gore leading out the field over the 1km surf swim closely followed by a group of the hot contenders in Darryn Purtell, Brad Venter and visiting TUKS student Pieter-Jan VD Merwe.

In the sprint event, it was one way traffic with Nic Quenet on the male side, leading from start to finish with local home boy Callum Simpson claiming a very well deserved 2nd spot with another youngster Scott Fisher claiming 3rd. The ladies race was very exciting as Schlebusch who worked with Gore on the bike to try and close the gap on Alexander Quenet, managed to overtake Quenet on the final run in to claim top spot in the ladies Sprint race. Quenet had to settle for 2nd with Gore coming home in 3rd spot.

The Challenge race saw a group of 4 come off the bike together, Venter, VD Merwe, Purtell and Gore. It was VD Merwe who showed his run strength by pulling away early on and never looking back. Purtell tried his best to hang on and ended 2nd with Venter coming back from injury completing the male podium spots.

The ladies challenge race was also very closely contested with Lesley Wilson-Jones and Teneal Featherby never more than 60 seconds apart during most of the swim, bike and run. It was Wilson-Jones who led home the ladies charge in the Challenge Race with Featherby taking 2nd and Melanie du Plessis claiming the 3rd spot.

A fantastic event with the next one set for JULY the 23rd. No late entries are accepted to so enter now via www.bactive.com to avoid disappointment