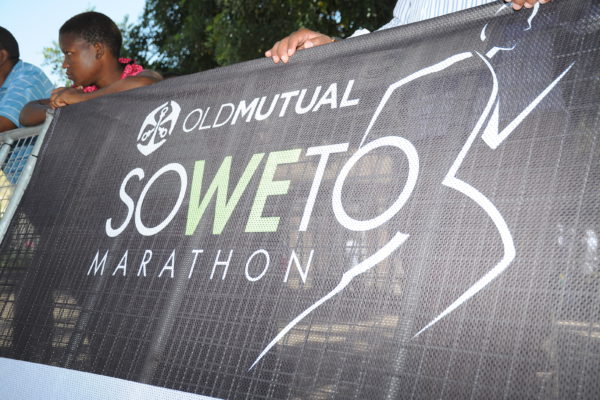 Images from Jetline Action Photos from 2015

Blumberg, who has took over this year as race director, has said the race organisers’ ambition is to have it regarded as Africa’s version of the New York City Marathon.

He has been concentrating on “ticking the boxes” required to deliver an operationally sound event on November 6: “Our aim is to deliver a world-class event and we are working very hard to get there,” said Blumberg.

A major change in 2016 sees the race’s start and finish being hosted at FNB Stadium – the stadium fondly known as “the Calabash” – in Nasrec.

Blumberg said there were several reasons behind the decision to use the new venue, foremost among them that “parking is abundant at FNB Stadium, as are additional toilets and other facilities”. He added that “the start and finish area is much bigger and will help accommodate all the activities that are planned for the day”.

For the second year running, Old Mutual has thrown its full green force behind the Soweto Marathon to host another race designed to inspire athletes from all over the world.

The route honours Soweto’s rich history and runners will pass six significant heritage sites on the marathon route. They are:

* Chris Hani Baragwanath Hospital, the third largest hospital in the world with 3,400 beds and 6,760 staff members;

The Soweto Marathon is part of Old Mutual’s strong portfolio of endurance sports sponsorships, called ‘World of Endurance’. It includes the Old Mutual Two Oceans, Old Mutual Om Die Dam, Comrades Marathons and Wildlands series of events. These sponsored events reflect Old Mutual’s focus on long-term goals and the group’s commitment to staying the course, be it in investing or taking part in a marathon.