A spare lung, a sense of humour and stacks of anti-chafe cream 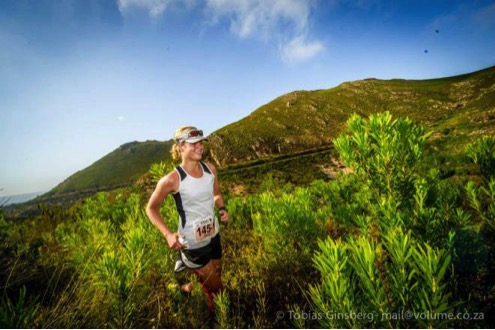 In the week leading up to the start of AfricanX on Friday 13 March, participants were asked to tweet the three things that they wouldn’t be able to go without at the race. This was my response: 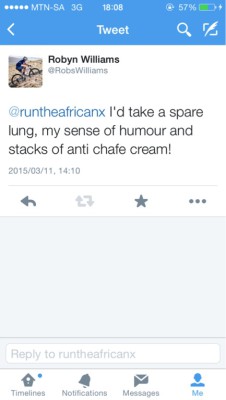 How prophetic it would prove to be.

I was supposed to do the race with my mom. It would either be a super bonding exercise or we’d be at each others throats. Unfortunately (or fortunately) we never got to find out. My mom broke her ankle 3 weeks before the race and I was left scrambling for a partner.

Luckily for me, my gooooood friend Amy shouted “YOLO” from the rooftops, booked her flight from Durbs and before long was on her way to join me on an epic adventure where we would cover 90km of tough trail running in 3 days in Grabouw. Neither of us were prepared. Neither of us had ever run more than 21km on trail. But we were keen for the challenge!

I moved into my little yellow tent at Houw Hoek Inn on Thursday evening and the nerves kicked in. I’d never even run with a hydration pack before. I tried my mom’s pack on and couldn’t imagine running with it. And how does one fuel for 3h30-4h30 of running? Would my legs hold up? Only the previous week my ITB had flared up badly and I’d taken a course of anti-inflammatories and done nothing for three days. I started to think I may have bitten off more than I could chew. 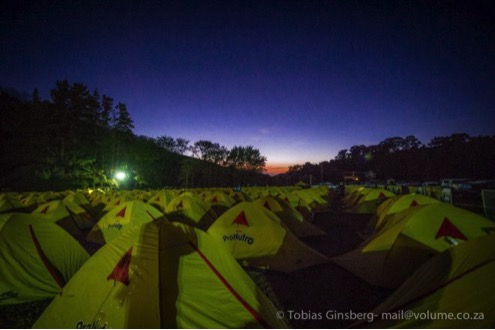 Home for the 3 nights

But Friday morning I pinned my number to my vest, donned my hydration pack and stood on the start line. Our game plan was simple – look after each other, eat and drink sufficiently and walk the hills. 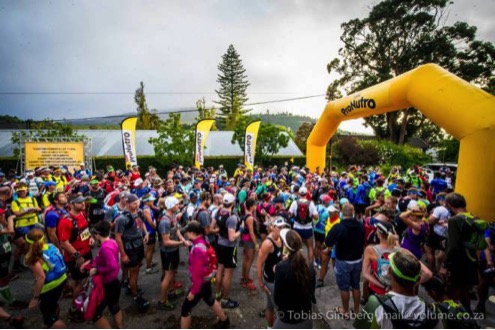 Nerves and excitement at the start of day

The first day was 34km and was supposed to be “easy” in comparison to day 2. The gun went and immediately we were going uphill. The running was nice with lots of singletrack, but I wasn’t feeling on top of things. At around 14km I was feeling decidedly tired. I checked my heart rate – 186. Whoa! That didn’t seem right. I checked it 5min later. 187. I put it out of my mind and kept on running, although I was feeling decidedly uncomfortable. At 22km I decided I needed to do something, so I made Amy stop and I took an Enervit gel. HR went down to 176 while stationary. I was struggling to breathe and eventually ripped my HR strap off as my chest was feeling constricted. The rest of the stage was a bit of a blur as I really struggled to keep going. I was feeling absolutely awful and extremely sleepy. Not quite usual when running. Amy got me to the end and I dropped onto a seat in the Rehidrat tent.

The rest of the day was spent eating, napping and grunting my way through a foam roller class. Prize giving and dinner in the evening was a fantastic affair with great food and entertaining MCs.

I chatted to my coach and he voiced a concern that I might have a bug. I wasn’t to start the following day if my waking HR was more than 20 beats above my normal waking HR. Alas, waking HR was 80 – well above coach’s recommended 20 beats up. But there was no way I wasn’t starting. Death before DNF remember.

Saturdays stage was also 34km, but with far more climbing. It was also going to be a much hotter day. Add to that that the start was delayed by an hour and we only set off at 9am. Today we would be going over Sir Lowry’s Pass by means of the Gantouw Pass, the old wagon trail. Saturday was also a dress up stage and some of the teams had gone to town – there was Red Riding Hood and the Big Bad Wolf, pharaohs, grown men in nappies, minions and more. At that point I could not imagine adding to my discomfort, but spirits were high. 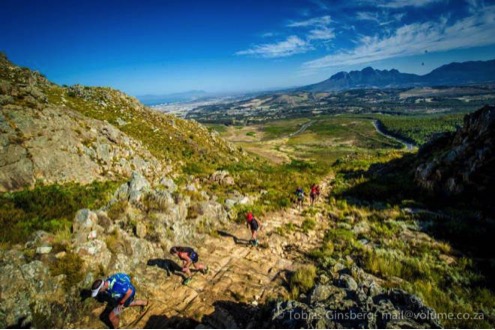 Trekking up the old wagon path

Again I wasn’t feeling well, struggling to breathe and run. I couldn’t answer Amy when she spoke to me and she eventually ended up chatting to all the other teams around us. We ran some absolutely spectacular trails in Grabouw, including Xterra’s infamous rock garden, unfortunately I really wasn’t enjoying myself. The first water point was at 9km and I really didn’t know how I was going to get to the end. Shortly after the second water point at 19km I asked Amy if she would rather go on alone. I was being a huge liability and I hate being the weak link. She said no – we were there as partners. 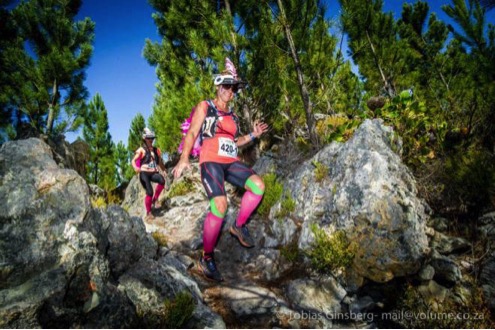 At 21km I stopped, telling Amy I wanted to throw up. What I brought up didn’t come from my stomach, but rather from my lungs! I won’t go into detail, but Amy worked with TB patients last year and she called it a “mucus plug”. Yum. But I felt like a totally new person. All of a sudden I could breathe and talk and run! It was absolutely incredible. I am guessing that having blocked lungs had been putting enormous pressure on my body while I tried to run, forcing my HR up and depriving my body of oxygen and making me very sleepy. 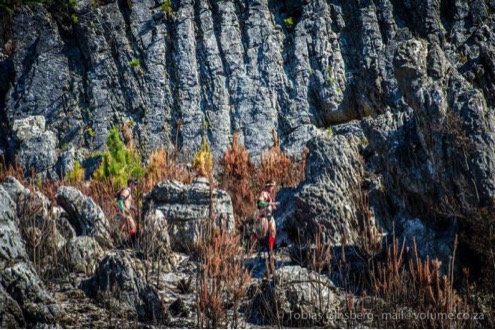 I sincerely hope that these guys had lubed up

The rest of the stage was fantastic as we traversed Groenlandberg and ran some amazing trails. It was incredibly hot, but we had renewed energy. I was chatty and we even ran hard at the end to stay away from another woman’s team to finish strongly at Paul Cluver some 4h30 after starting. This was an incredibly tough day with some teams taking over 8 hours to finish and others having to pull out.

I was disappointed that I hadn’t been able to enjoy the awesome trails in the first 21km, but was also super relieved to have figured out what was wrong with me. [I also think that this is what affected me during the run at Xterra and one or two other races so I am very excited about trying to determine the cause]

I think my favourite sponsor of the event was Fair Cape who provided ice cold high-protein chocolate milks at the end of every stage and chocolate mousse after lunch. Yummo. Probably drank a few too many choc milks. 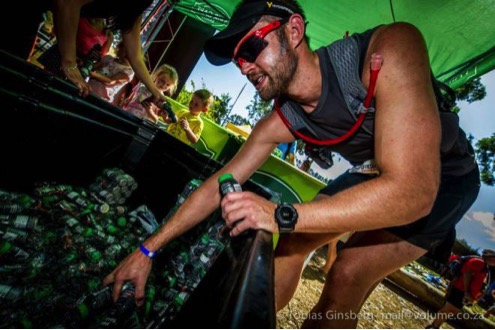 We were bused back to Houw Hoek Inn and immediately jumped in the pool, before cleaning up and sitting down to another amazing meal. Again we grunted through a foam roller class, before eating again.

The third and final day was a 22km stage. The first 10km was downhill and the next 12 was pretty much uphill back to the start. We didn’t want to underestimate the stage, especially as I was worried that my niggly ITB might flare up with so much downhill running. Amy and I were super strong, running well together and taking turns to carry the one hydration pack that we were sharing. We traversed an amazing mountain with spectacular views, alas there was almost no time to look up as one careless foot strike would send you flying. Amy pushed me all the way to the end, so much so that I almost went head first down the singletrack in an effort to keep up. We finished 8th ladies team on the stage.

Without doubt AfricanX has got to be the best, most challenging, exhilarating, well-organised and amazing race I have ever participated in. The routes were superb. The food was scrumptious. The vibe among the participants was electric. Everyone there was having a jol – even the top racing teams. It was such fun sleeping in a tent – I felt like a kid again. Every night when my head hit the pillow I was lights out until the next morning. 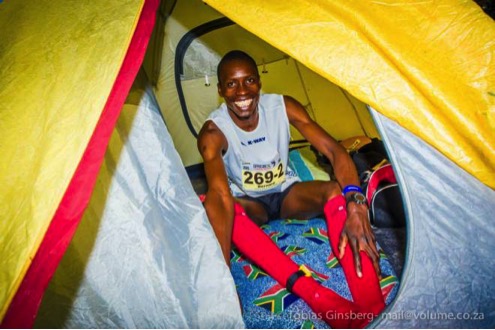 Seems eventual winner, Bernard Rukadza, was as excited as I was about sleeping in a tent

I ran in my Hoka Huakas which were absolutely amazing. While others were sorting out massive blisters I walked away with not a mark on my feet. We also ran about 1km on super sharp railway rocks which I hardly felt under my more cushioned shoes. Winning!

I have such new respect for trail runners. We were all limping around from the end of the first stage, but each morning we got up and ran again. Hurting together brings a special kind bonding and while my race wasn’t as great as it could have been I already can’t wait for the next AfricanX. I am just bleak that I have to wait a whole year. 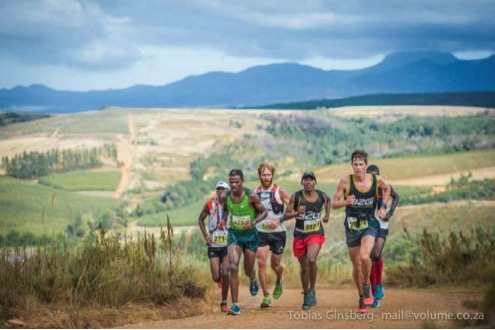 A huge thank you to Amy Burger for dragging me the first 55km. You were the best partner I could have asked for – always chirpy and positive. It was a pleasure suffering with you. 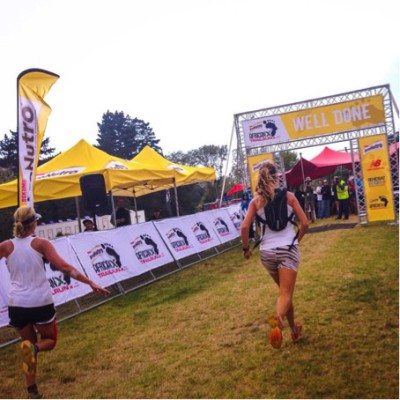 I reckon this has got to be Stillwater Sport’s best event. Put it on your bucket list.

All the stunning photos were taken by Tobias Ginsberg