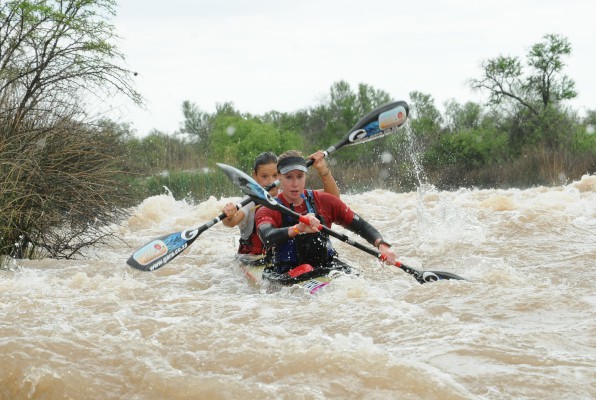 With a busy period in the build up to the 2016 FNB Dusi Canoe Marathon starting with the exciting Umpetha Challenge, 2015 Hansa Fish River Canoe Marathon winner’s Abby Solms and Anna Kožíšková will be apart for much of their preparation however Solms is in the hunt for a partner for the Umpetha Challenge on Sunday, 8 November. Jetline Action Photo/ Gameplan Media

Pietermaritzburg – Coming off a commanding record win at the 2015 Hansa Fish River Canoe Marathon Abby Solms and her K2 partner Anna Kožíšková had temporarily parted ways as the Czech star jetted off home which has meant that Solms is in the partner market with the Umpetha Challenge the first blimp on the FNB Dusi season radar on Sunday, 8 November.
Solms, who has taken some time off following her and Kožíšková’s dominant victory at the Fish, has taken some time off from paddling however with another marathon Dusi season coming up with the plan to hit the ground running when she takes part in the Umpetha Challenge in just over two weeks’ time.

It is going to be a fairly lonely time for Solms as she builds up to the 2015 FNB Dusi Canoe Marathon with the absence of Kožíšková however she does not feel that this will hurt her preparations for the upcoming season.

“Most of my training has been done on my own usually so it isn’t any different to previous years,” Solms mentioned.

“Even when Anna was here during the last K2 season we did a lot of training in K1’s so hopefully I will find a training group at NCC that I can train with and then find a girl to race with because it is nice to be in the mix and racing in the build up to the FNB Dusi.

The new spanner in the Solms/Kožíšková works in their FNB Dusi Canoe Marathon preparation is the fact that both are married and Solms has had a change in approach following her wedding earlier in the year, and she also has to juggle her commitments to her teaching post at Epworth. The fact that there is another person in her life consistently has meant that there has had to be a shift in her mind set going into a pressurised season for her.

“In the past everything sort of revolves around yourself and your training but now you have to remember that there is another person involved and you are now part of a team.

“Time wise now I have got to try and find a happy medium and split it up evenly,” she mentioned.

Although the Umpetha Challenge will be the first focus in Solms’ build up to the 2016 FNB Dusi Canoe Marathon the 26 year old is looking towards the three day marathon with an eye on claiming her first ever title following numerous bridesmaid’s finishes.

“I am not here to come second again and with six second place finishes and Anna and I narrowly missed that K2 title in 2013 so we do have some unfinished business to take care of and come back and try and claim that victory.

“I am not too sure about what other ladies have teamed up going into the season but we will be able to see who has teamed up with who as the season gets going,” she added.

It will be a difficult period for the dynamite duo as they will have very little time in a boat together before the FNB Dusi, however with the seeding process being less intense for the ladies Solms is not too worried about that going into the season.

With that said Solms is an experienced campaigner and following a dominant Hansa Fish the pre-Dusi season should prove to be a solid block of training for her as she awaits the arrival of her marathon world champion partner Kožíšková.