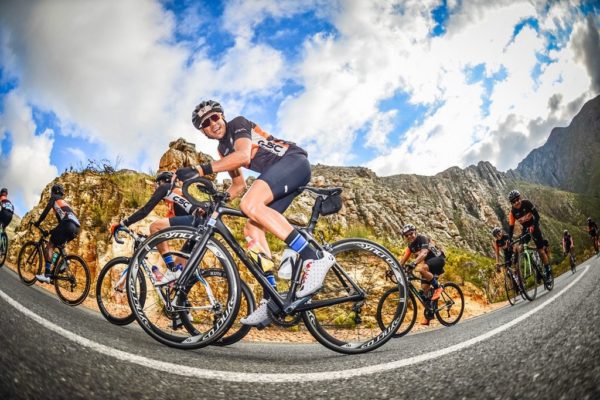 All smiles at the Coronation Double Century. Photo by Tobias Ginsberg/Volume Photography.

On a searingly hot day in the Overberg town of Swellendam – on Saturday, 23 November – the Active Bodies and Private Client Holdings teams blazed to victory in the 2019 Coronation Double Century. The men’s defending champions were once again in formidable form, leading at each time check; while the Private Client Holdings team, many of whom were making their debut in the race, likewise dominated the women’s race. The mixed category title was secured by the Johannesburg base UFO (Urban Fitness Outdoors) squad.

For the earliest starters, there were overcast conditions to ensure a cooler ride through the initial kilometres. By the time Active Bodies set out though, rolling off the start line at the Swellendam Show Grounds, the mercury had already begun to climb. As defending champions, they were the final starters, a full 2 hours and 45 minutes after the first group, the Coronation Mechanics, had started at 5am sharp.

There was drama for Active Bodies within the first 10 kilometres though; when they lost potentially their strongest rider, Matt Beers, to a puncture. They pressed on with 11 of their maximum 12 rider contingent, while Beers was left to chase on his own. Miraculously the man who usually represents NAD Pro MTB was able to catch up to the rest of his team by the time they reached Ashton, 120 kilometres into the race. Having returned to South Africa from a trial spell, as a stagiaire, with the UAE Emirates WorldTour team Beers is clearly in the best form of his career.

Team work, very much, makes the Coronation Double Century dream work; even when it comes to fixing mechanicals. Photo by Tobias Ginsberg/Volume Photography.

He was not just a passenger for the remaining 80 kilometres though. Beers helped his team to a time of 4 hours, 23 minutes and 16 seconds; 8 and a half minutes faster than their 2018 effort. The faster time was aided by a tail wind in the final 50 kilometres. Usually the hilly finale to the Coronation Double Century is made tougher by the summer’s prevailing South Easterly wind. In 2019 an unseasonal Westerly helped riders as their legs started to fail them.

Though they certainly must have been tired, Active Bodies gave no outward impression of weakness. Having now won three editions on the trot the winners have the team time trialling know-how. “Ja, we’ve got a great team; with some top-class athletes and that really helps”, Clint Hendricks, the road captain, of team Active Bodies downplayed the squad’s time trialling skills. “But yes, Coronation Double Century experience is really important. It is our third victory in a row as Active Bodies and if I could say my personal record here isn’t bad, in the last five years I’ve won four and been second once.”

“Riding for Active Bodies is very special though” the 2018 Commonwealth Games Bronze Medallist continued. “We ride for a bigger cause. This year we were riding for the Smile Foundation and we donate the prize money to the charity so that they can help children live better lives, by providing them with life improving maxillofacial surgeries.”

The spectacular Tradouw Pass sets the scene for a beautiful day on the bike, at the Coronation Double Century. Photo by Tobias Ginsberg/Volume Photography.

Behind Hendricks and his triple champions Alfa Body Works/Giant were second; for the second year in a row. They finished 6 minutes and 32 seconds behind Active Bodies, in a time of 4 hours, 29 minutes and 48 seconds. The Hartlief Deli/Powerbar team were third, 14 minutes and 18 seconds back.

In the women’s race, rearranging of the starting order aided the top teams in their quest to set fast times and race each other without interference from slower open or mixed teams. “We hardly had any traffic” Stellenbosch Tri Squad/Specialized’s Kylie Hanekom praised. “We enjoyed a pretty much clean run which made a massive difference, in comparison to last year.”

Hanekom’s sentiments were echoed by Lara Tennent, the ride captain for Private Client Holdings. “Being able to get a clear run meant we could get into our pace lines and ride our own race” she explained. “For most of the race we were actually first on the road, with just the head marshal’s car in front of us. It was amazing.” 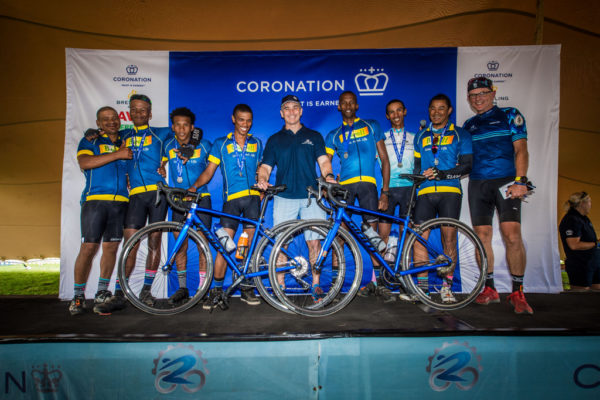 “With the changed start times and the bigger focus on the women’s race this year we were excited to give it our best shot” Tennent added. “We are very grateful to Private Client Holdings for coming on-board and sponsoring us. They could have sponsored the men’s team again but wanted to support the women’s race because it was so competitive. There were about six teams who were in the mix for the win and I think our team training really made the difference. We started training together as a squad, practicing pace lines, about two months ago and it paid off today” she concluded. 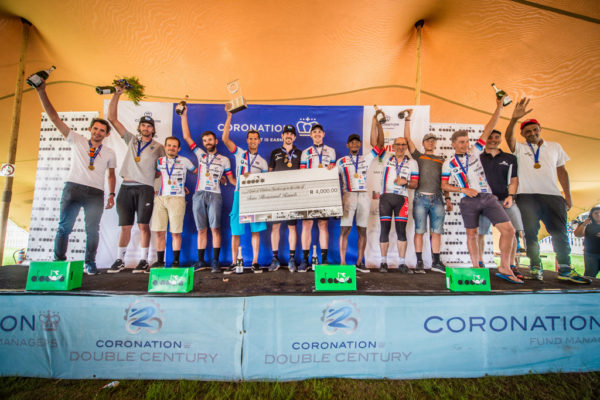 Private Client Holdings posted a stellar time of 5 hours, 47 minutes and 2 seconds on the 202-kilometre-long course. Their closest competitors were the Tiletoria Train who finished in 5 hours, 56 minutes and 14 seconds; 9 minutes and 12 seconds back. The Stellenbosch Tri Squad/Specialized team was third, as they came up short in their title defence.

Mixed category champions, UFO, were pushed all the way back to Swellendam by the second placed Bekker Steel Racing. With the teams spending differing amounts of time in the neutral and feed zones it was impossible for the team from Johannesburg to tell if they had won the race, despite leading on the road throughout.

Their relief, when the results were made official was palpable. “I’ve been doing Coronation Double Century since 2011 and riding in a mixed team for the last four years” Jono Cloete, the founder of Urban Fitness Outdoors said. “We’ve been working towards this for the last seven months and the whole team who rode today also rode, and won, the Maluti Double 90 earlier this year. So, it’s been a fantastic team effort.” 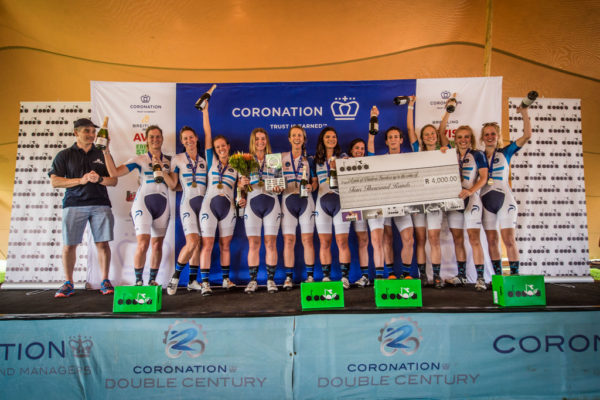 The Private Client Holding’s team won the women’s race in a stellar time of 5 hours, 47 minutes and 2 seconds. Photo by Tobias Ginsberg/Volume Photography.

UFO’s time was 4 hours, 55 minutes and 44 seconds, 2 minutes and 56 seconds ahead of Bekker Steel Racing. The final category podium position was filled by the Enjoy dormakaba team.