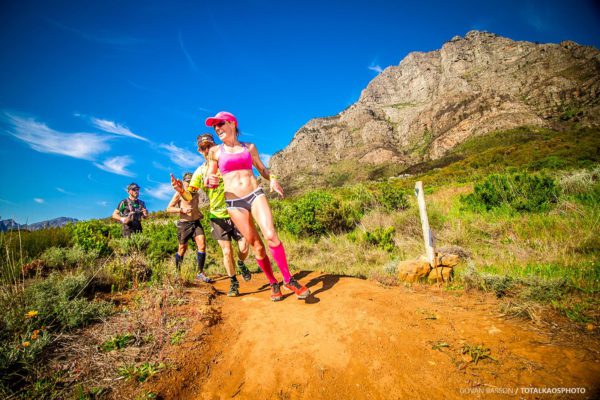 The inaurgural Cochoqua 3 day stage race was hosted in the most beautiful setting – at “the Retreat” on foot of the Simonsberg mountains, situated on the Boschendal farm. Those fortunate enough to have opted for the meals/accommodation package, were pleasantly surprised by exquisite luxury accommodation. Chad and I checked into a brand new luxury unit, fully equipped with a kitchenette, dining room and flat screen TV and all. It was “five star” all the way, with crisp white linen and  plush bath robes. It certainly didn’t feel like we were there to race. I felt like we had just arrived for an exclusive weekend breakaway.

As 5pm started to draw closer, reality set in – we were here for business, time to start prepping for the race. Whilst warming up, I realised that Megan and William Leslie were also racing in the Mixed category, as well as Mazo …. and Sally Fenwick (from Gauteng). This was certainly not going to be smooth sailing…

The first stage of the race was a fast 8km route, leading runners through the vineyards and leading them up the mountain with some sharp hairpin bends . The pace was exceptionally fast, with the leading men’s solo time of just over 37 minutes. Sadly as I had anticipated the Leslie family beat us by 30 seconds, game on. 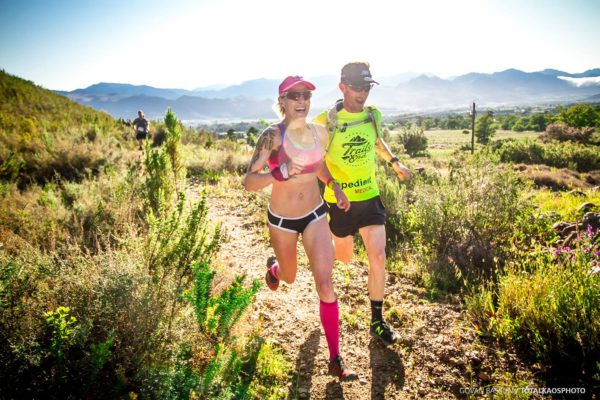 Upon completion of stage 1, participants were treated to a little recovery snack provided by Butternut. Crisp slices of toasted Ciabata, smothered in the flavour of their choice, topped with a sprinkle of either chocolate flakes, bananas or berries. A winner recovery snack  (and best of all it was complimentary and limitless)!

I had perused over the menu prior to the race, but can certainly say that Boschendal completely outdid themselves. Dinners were made up of succulent Angus beef fillets, Chicken Biryani, roast veg and divine salad, to name but a few options. The complimentary Stellenbrau craft beer was a much welcomed additional carbo-loader while everyone settled down around the bonfire for an informal prize giving.

On Saturday morning, runners were required to get up a little earlier to be transported to the “secret” starting location. Thelema wine farm hosted the beginning of day 2, of the Cochoqua trail race. 28 kilometres of trail running along the foothills of the most breath taking mountains, lead runners through the Banghoek nature reserve and back to the Boschendal wine Estate.

With the final stage still lying ahead, participants had an options of: icing their tired legs in “the Retreats” phenomenal outdoor pool and/or visiting the EPT team for a sports massage. I personally chose the later, where the guys connected me to their Complex machine to speed up recovery time of fatigued muscles. 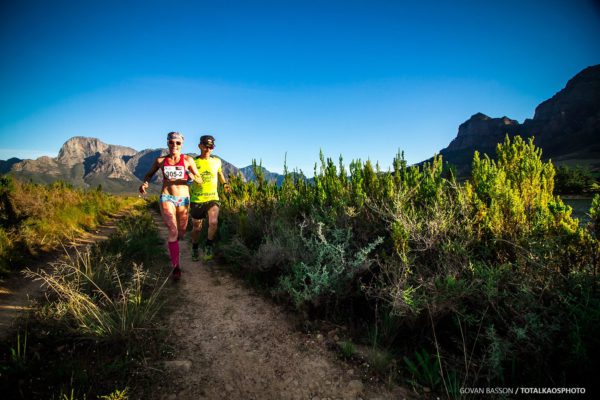 I’ve competed in numerous stage races in the past, something that I noticed with this particular one is the fact that there were many more young athletes. I think that the shorter distances help novice runners transition over to longer distances. It also caters for anyone attempting to tackle their first multi day stage race.

Additionally we were awarded more time to chill out and recharge. You’d race hard in the morning for two or three hours, but then have the rest of the day off to enjoy the environment and connect with other like minded people.

On the final day of our race participants were treated to another  scrumptious breakfast. The competition was tough amongst the Mixed teams. The Leslie siblings held a comfortable lead. Chad and I knew that we had our work cut out for us over the remaining 18 kilometres. Mazo and Sally were not going to go down without a fight. Accumulatively they had a four second lead on us over the past two days. We knew that as soon the gun went off, we’d have to put the hammer down from start to finish. Chad was the most incredible partner, constantly giving me words of encouragement, while nudging me up the hills. Our determined team effort resulted in us chasing Megan and William down at the end of the race. They crossed the line 30 seconds ahead of us on day 3. Chad and I would have loved to have waved the flag of victory for the old Vets on at least one day, but as my hubby had pointed out – our competition was 25 years younger than us. (Megan is as old as my son – horror!!! Enough to make anyone feel old).

After recovering and freshening up, we all relaxed on the grass, drinking a glass of wine and listening to the live entertainment provided, while waiting for prize giving. The participants shared a final meal together with new found friends and old trail running buddies, before having to part our separate ways after a truly memorable weekend. Amoija and Boschedal definitely have a winning recipe. Certainly a race that I will be diarising for 2017!