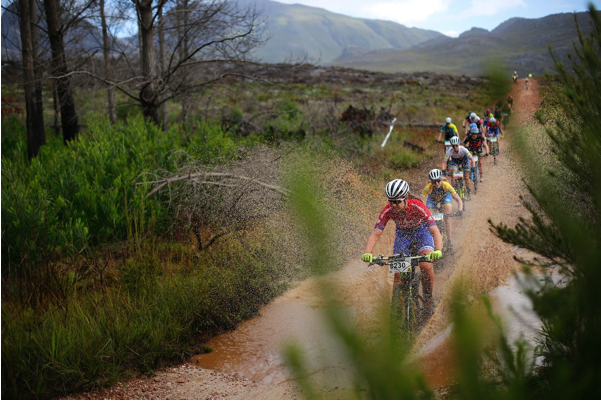 Candice Neethling leads the women’s charge through Grabouw’s soaked routes this past weekend at the first round of the Ashburton Investments National MTB Series in Grabouw.
Photo credit: www.zcmc.co.za

Ashburton Investments, the title sponsor of the South African National MTB Series, has announced it will equal the Elite women’s prize money.

This follows the Facebook message posted by three-time Cape Epic winner and Swiss champion, Ariane Lüthi of Team Spur. Lüthi, a Swiss national who lives in Stellenbosch for most of the year, is a former winner of the series.

While grateful for an increase in the Elite women’s prize money over 2016, Lüthi still recognised that the men earned more prize money than the women, for the same race distance, and refused, on principle, to participate in Saturday’s event in Grabouw.

Ashburton Investments, a part of the FirstRand Group, a company that is highly committed to gender equality, has agreed that equal prize money should be given for the entire series.

“We are firmly committed to the series, and as such, we want to encourage the participation of every rider. The prize money should be equal, and our hope is that this will further encourage more women to enter and compete. We would like to thank miss Lüthi for bringing it to our attention, and that we are able to rectify this discrepancy for the remainder of the series” said Marie Creighton from Ashburton Investments.

“I am glad that we can offer an equal prize purse to the ladies, without lowering the men’s prize money and I do believe that the result is a win for all. I would like to thank Ashburton Investments for the continued support and look forward to a great series in 2017!” said Fritz Pienaar, Director of Advendurance, the company that organises the Ashburton Investments National MTB Series.

“This is fantastic news and I cannot thank Ashburton Investments enough for increasing their sponsorship towards our beautiful sport and, in particular, their support of equality within it. I also need to thank Fritz Pienaar for contacting me this morning. We had a very positive conversation. I understand his position as a businessman. He did and still does a lot for the professionalism of the sport and I truly appreciate that,” said Lüthi.

“The way Ashburton Investments as well as Fritz Pienaar responded to my request is admirable. The fact that Advendurance, with the help of Ashburton Investments are willing to change the prize money structure and make it equal for women and men, is something I don’t take for granted. It is often very difficult to effect change. Maybe that is one of the biggest reasons why I love South Africa. I love it for its open mindedness,” added Lüthi.

“It is important to me to clarify that it was never my intention to make it a fight between Advendurance and myself or between men and women for that matter. My intention was to create awareness for the gender inequality that there still is, making people think and causing a discussion about it. If the cycling community’s response to this issue could be mirrored in broader society I really believe we could move forward on many more challenging social issues,” said Lüthi.

The Ashburton Investments National MTB Series is the most prestigious mountain bike racing series in South Africa and widely considered the best organised series in the world. It comprises seven rounds of racing in six provinces and caters for all levels of mountain bike racer, from novice to professional.