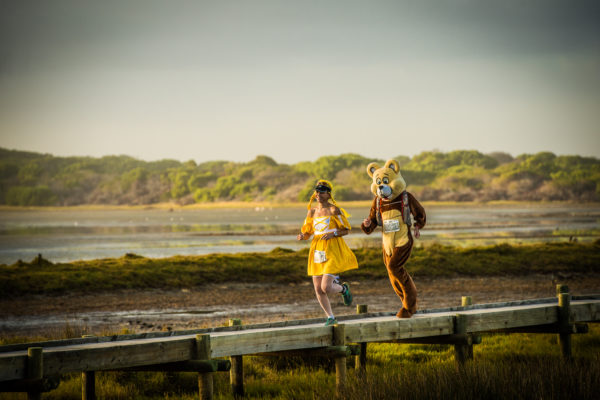 Although all three stages of the AfricanX Trailrun presented by ASICS are equally special, Stage Two features ‘that extra flair’ with trail runners allowing their creative sides to get the better of them as they try to outdo their rivals in the AfricanX’s “Best Dressed” competition.

In 2017 Renata Schoeman and Nic De Beer of Team “Goldilocks and The Bear” walked away with the coveted title of “Best Dressed Team” after completing Stage Two dressed as Goldilocks (Renata) and The Bear (de Beer).

According to Schoeman, the AfricanX Trailrun was her first Stage Race (run in 2009).

“I’ve loved the routes, the vibe, and the experience (including the food and the race village),” says Schoeman. “Nic and I did the AfricanX to raise awareness for ADHD and other mental health barriers to education and to launch our NGO/PBO ‘The Goldilocks and The Bear Foundation’. We decided from the beginning to go big or go home. We actually dressed up all three days according to our theme. You can’t imagine how layers of net and off shoulder dresses can chafe! My suffering, however, was nothing compared to Nic’s. I had to pour ice down the bear suit every few kilometres. I also carried the Bear’s head a few times. The photograph taken by Tobias Ginsberg became an iconic photo of what the Foundation stands for – children, support, ‘in-it-for-the-long-run’ and doing what we love.”

For de Beer, it’s the incredible social vibe that attracts him to the AfricanX Trailrun. “You get to spend a weekend with all your running buddies from all over the country, doing something we all love,” says de Beer. “The best dressed competition is such a great addition to AfricanX. Only a small percentage of the field is there in serious racing mode. The rest of the field can express themselves in various ways by dressing up and having fun. Winning the competition was just a bonus. By doing something like AfricanX all dressed up in the theme of your Foundation, served as confirmation of our commitment to the cause.”

“If you want an introduction to trail running, AfricanX is the place,” continues de Beer. “The trails are runnable and you have unlimited opportunity to learn all about trail running from experienced trail runners when socialising with them after each stage.”

For more information on The Goldilocks and The Bear Foundation visit: www.gb4adhd.co.za

With awesome sponsor prizes up for grabs, “Dress Up Day” (Stage Two on Saturday, 29 April 2018) is sure to be a source of much excitement.