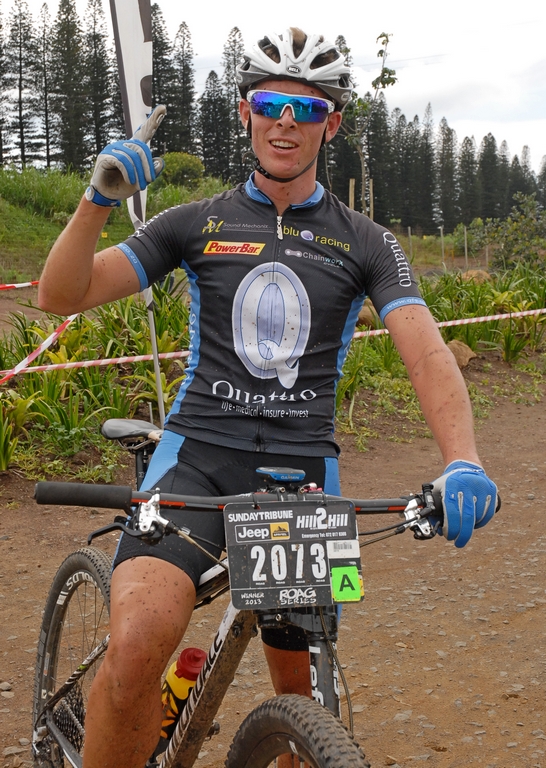 Tyron Bird raced to victory to take his maiden win at the Bestmed Ballito Expedition which took place on the KwaZulu-Natal North Coast on Saturday. Photo: Jetline Action Photo

Kokstad-based mountain biker Tyron Bird made a daring solo escape in the final 15km to take his maiden win in the Bestmed Ballito Expedition, presented by ASG, on the KwaZulu-Natal North Coast on Saturday.

The Quattro rider held a small but determined chasing group at bay to claim victory in the 50km race in a time of 1:53:37.

Ryan Piercey followed him across the line to earn the runner-up spot in 1:54:14, with Joshua Nelson just pipping Brad Stroberg for third in 1:55:33.

Bird said the racing started slowly, as the riders gauged each other’s strength and the effects of the previous night’s rainfall.

“We were worried initially but the conditions weren’t too muddy and the trails were nice and grippy, so it was great.”

After getting away early on, the eventual top-four finishers kept the tempo up and worked together to extend their lead over the ensuing 30km.

“I was hurting a bit from the start until about the halfway mark,” said Bird. “But I was able to sit on and conserve as much energy as possible.”

When Nelson launched a strategic attack, Bird realised that this could be the decisive move of the day.

“He wanted to put the hurt down on us and as soon as he started getting a bit of a gap, I decided to go across to him.

“He eased up slightly after I joined him and, as soon as he did that, I knew that this was my chance.”

Bird attacked with 17km to go but Nelson managed to stay with him for a bit.

“Then we got into a nice technical single-track section and I just kept the pace high through there.”

His tactic worked and when they emerged from the single-track, Bird had opened up a small but sufficient lead.

With a strong wind hampering his solo effort, he put his head down and gritted his teeth towards the finish at Sugar Rush Adventure Centre.

“It was like a 15km time-trial from there and I knew I had to keep going because I had three guys who were chasing me down.

“In the end, I managed to cross the line first and that’s what counts. It was nice to come down and take the win.”