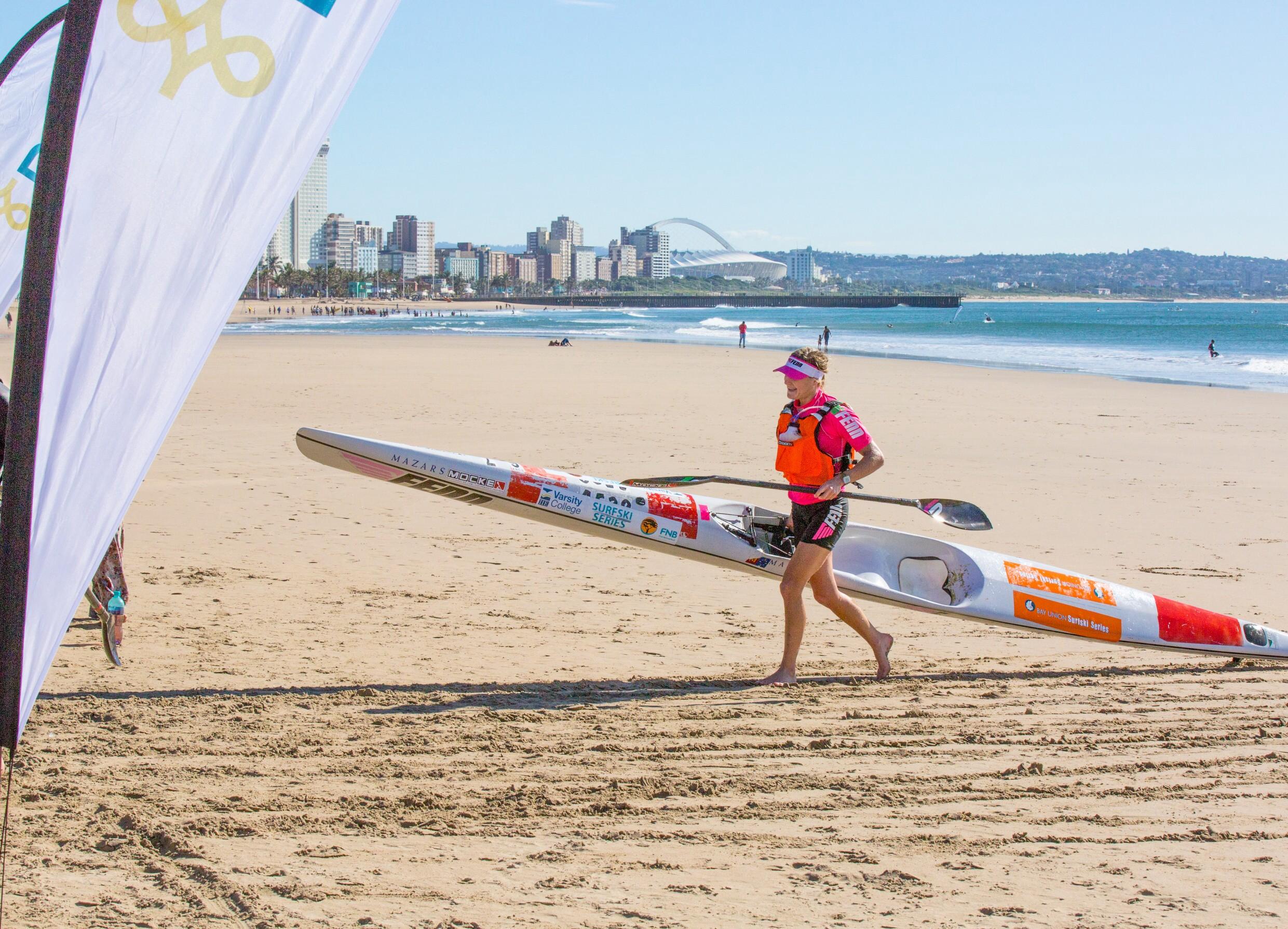 Nikki Russell runs up the beach to claim the women’s title at the Bryte Surf Challenge on Sunday. Graham Topfoto/
Gameplan Media

Durban – Surf iron man Matt Bouman used a retooled race strategy to canter to victory in the Bryte Surf Challenge surfski race on Sunday as he held off a strong field eager to capitalise on the flat surf conditions.

After being pressurised heavily by the youngsters and canoeing marathoners last week, the experienced Epic Kayaks team paddler decided to shake off the youngsters snapping at his heels early on in the 14 kilometre, two lap affair.

“It was a kinda arm-wrestle, and though it looked good at the end, I think it flattered me,” said Bouman.

“I had to go really hard right from the start to get a lead. I didn’t want to give Andy (Birkett) and the other young guys a chance of holding onto the string. Last week I couldn’t drop them, so I decided to do it early,” he added.

He said that he revelled in the contest created by the number of fit and fast canoeists who are becoming a regular feature of the surfski series, including World Marathon Champs medallist Andy Birkett, who grabbed a victory in the Bay Union Surfski series.

“Us traditionalists love racing downwind and moving ocean conditions but the sport is evolving and is attracting the attention of the flatwater racers. The majority of surfski paddlers nowadays probably prefer a flatter day,” said Bouman.

Bouman said he thrived on the pressure created by races like this and hinted that the ever-growing sport of surfski should provide specific races or series for downwind, open-ocean paddlers and calmer, flatter sea conditions.

Bailey de Fondamiere sprinted  up the beach just ahead of Birkett to take second, with Wade Kreiger and Luke Nisbet snapping at his heels in the tight four-boat chasing bunch.

The women’s race fell to the bubbly Nikki Russell, who managed to use her open-ocean racing skills to get away from the imposing duo of Kyeta Purchase and Jenna Ward.

“The runs were awesome today, it was a lot of fun out there!” the Fenn Kayaks paddler enthused.

“Had it been flat then we would have all been together. The girls field is so strong,” she added.

After some time away training in East London Russell said she was looking forward to getting back to training with the Blue Lagoon based MacSquad, with a view to peaking for the Surfski World Championships and possibly having a shot at the ICF Flatwater Marathon World Championships at Camps Drift in Pietermaritzburg in September.

Bruce Wenke and Lance Howarth managed to drop Stretch Struwig and Gordon Spalding to take the doubles title, while Stuart Carter was the first of the paddler home in the single lap Short Course race.