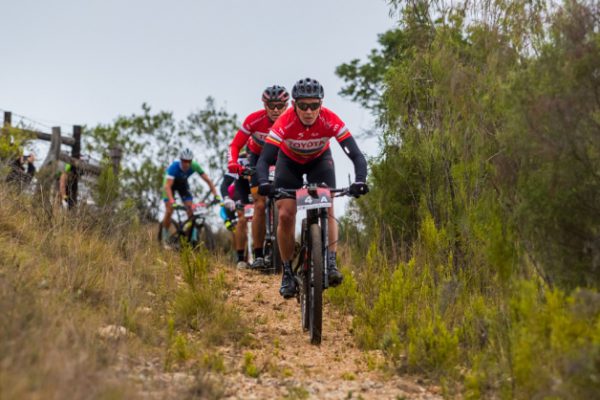 Last year’s third place finishers Joel Stransky and Andrew Mclean will be fit for the PwC Great Zuurberg Trek despite both suffering injuries in the build-up. Photo: Warren Elsom

Mclean is currently nursing a broken collarbone after a nasty fall that forced him to withdraw from this year’s Cape Epic, while Stransky was hospitalised with a broken rib and punctured lung after crashing on the prologue of the Epic on Sunday.

“It is one of my favourite races and I should be back on my bike in a week or two.”

He said he had not even considered the fact that Stransky might not be able to partner him in the Eastern Cape event in which they placed third last year.

“Joel would kill me if he thought I was considering trading him in for a younger model,” joked Mclean, but added that he was “very confident” they would be fighting fit for the tough three-day race in the Sundays River Valley and Addo Elephant National Park.

“Knowing Joel, I’d imagine that the minute he can get on the indoor trainer he’ll be back into training and we should be there. We may not be in tip-top condition, but we’ll certainly be good enough to race.

“Our position last year wasn’t too bad for two old men and this year we’ll aim to do the same, if not better.

“Joel and myself are very competitive and we both relish the fact that, in mountain biking, we are able to compete with some of the younger riders.”

Mclean said that while he planned on returning to training as soon as possible, his injury was taking longer than usual to heal.

“When I’ve broken a collarbone in the past I’ve had it plated, which speeds up the recovery and rehabilitation process.

“However, with this break, doctors didn’t want to plate it due to various reasons, so I’ve had to allow it to grow back, which takes more time.

“Having said that, it’s feeling a lot better already and I hope to be back on the indoor trainer within a week before hopefully being back to off-road training in a month or so.”

The PwC Great Zuurberg Trek, which is based at the Zuurberg Mountain Village outside Port Elizabeth, takes place from May 26 to 28.