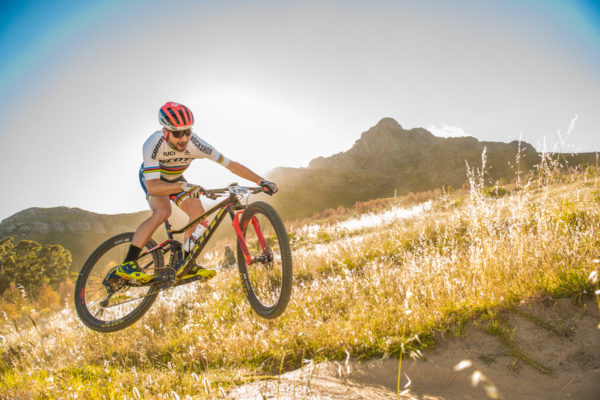 Men’s cross-country World Champion and UCI World Cup Champion Nino Schurter joined in on the action at the 2017 BUCO Origin Of Trails. “I love Stellenbosch, it’s one of my favorite places to ride,” says Schurter. “The race was cool. It showed off the really nice trails. I wasn’t in race mode, so I got to see the scenery today. I took a lot of selfies on the bike and had some really good chats.” Seen here: Nino Schurter having fun on route during Stage Two. Photo Credit: Tobias Ginsberg

Stellenbosch (Western Cape) – Stage Two of the 2017 BUCO Origin Of Trails Two-Day Mountain Bike (MTB) StageRace treated riders to 23.2km of single track riding in and around the picturesque City of Oaks on Sunday, 26 November 2017.

Daniel van der Walt claimed his second stage victory in the men’s Short Course crossing the finish line in 01 hour 30 minutes 47 seconds. “Today’s stage was definitely tougher than Stage One,” admits van der Walt. “It was good though, a lot of fun. The route was well-marked. I’ll definitely be back next year.” Tjaart van der Walt came in second, while Ico Coetzee finished third.

deserving time of 01 hour 39 minutes 49 seconds. “This is the first time that I take part in Origin Of Trails,” admits Gershwin. “I really enjoyed the event. The route is nice. I love the tracks, jumps and single track. I was hoping to make top five. I’m tired, but it feels good.”

The BUCO Origin Of Trails is a proud supporter of Prochorus, an organization that was established in 1996 with a primary focus to redress the social imbalances in society and secondly to meet the needs and concerns of the local community.  Origin Of Trails also supports the Aitsa After Care Centre. The Centre strives to expose children to fun activities and programs in an alternative home environment where they feel loved and special.

Rory Smith was the first rider home in the men’s Medium Course with a finishing tine of 01 hour 39 minutes 28 seconds. Daniel Groenewald came in second, while Leon Prozesky finished third.

Renay Groustra claimed his second stage victory in the men’s Long Course in a time of 02 hours 58 minutes 49 seconds. “I’m happy to be back on the bike,” says Groustra. “I had a blast at Origin Of Trails. The trails are fantastic. This definitely is the MTB party of the year. I’m thankful to the event organizers for putting together a great event.” Jean-Pierre Lloyd came in second, while Craig Uria finished third.

Marlene Lourens crossed the finish line first in the women’s Long Course. According to Lourens the stage was fantastic. “It really is a privilege to be able to ride in Stellenbosch. Everybody comes to chill. The pros get to relax and enjoy themselves. Origin Of Trails is what mountain biking is all about. It is true mountain biking.” Lourens crossed the finish line in 03 hours 31 minutes 15 seconds, followed by Ila Stow in second place.

“Today was amazing,” says Stow. “It’s nice to see how the trail networks have expanded in Stellenbosch. It was a treat riding with Marlene. We had a lot of fun out there. The routes have so much to offer and are really rewarding.” Tanya Rabie rounded off the podium.

Men’s cross-country World Champion and UCI World Cup Champion Nino Schurter joined in on the action at the 2017 BUCO Origin Of Trails. “I love Stellenbosch, it’s one of my favorite places to ride,” says Schurter. “The race was cool. It showed off the really nice trails. I wasn’t in race mode, so I got to see the scenery today. I took a lot of selfies on the bike and had some really good chats.”

XTERRA legend Conrad Stoltz was also seen out on route. “I love the event,” says Stoltz. “It’s the epitome of MTB trails in Stellenbosch. This is the reason why I do the sport. It was really special riding some of the trails that I have built.”

EVENT INFORMATION: Affectionately known as the MTB party of the year, the BUCO Origin Of Trails highlights the beauty and splendor of Stellenbosch while offering entrants the “once a year” opportunity to experience a vast network of world class trails that include a spectacular combination of single-track in the pristine setting of the majestic Stellenbosch Winelands.

After each stage riders had the opportunity to share their war stories while enjoying an ice cold Becks Blue ‘guilt free’ in the finish area.

The first 1000 entrants received an Under Armour Garment.

“The prize couldn’t have come at a better time,” says a very happy van der Merwe. “I had to borrow a friend’s bike in order to take part in the event. I plan on riding my new Specialized Bike as soon as possible.”