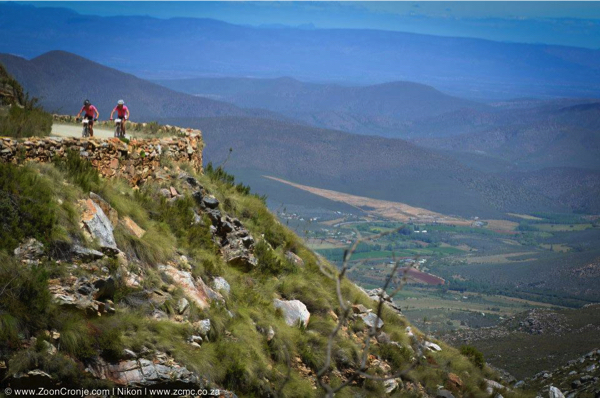 The iconic Swartberg Pass will feature in not one, but two stages in 2015, with competitors tackling it from both directions on Stages 4 and 5. Stage 4 will be a mountain-top finish, which is exceptionally rare in mountain bike stage racing.
Photo credit: Zoon Cronje/Nikon

The Cape Pioneer Trek international mountain bike stage race will herald a new era when the eighth edition gets underway in the coastal town of Mossel Bay in South Africa’s Western Cape province on Sunday.

A new route configuration and fresh, never-previously-ridden trails combine with iconic geographic and historic regions in three different biospheres to deliver what is considered the most varied, and finest route yet in the International Cycling Union (UCI) graded race.
Riders from 15 nations and four continents will contest the 541km race over seven days with the top men and women competitors not only chasing generous prize money and global media exposure, but also significant UCI points, which will help nations and individuals in their quest to qualify for the Rio Olympic Games next year.
The main race focus is on the two-rider teams, but there’s also a solo division for men and women.
The seven-day race will start with a short, but intense 13km prologue time trial dubbed #PointPursuit, which takes the riders through the town of Mossel Bay and along the coastline, passing local points of interest that include Point High School, St Blaise Lighthouse and Santos Beach.
Although short, the prologue will allow the leading competitors to gauge their form and that of their rivals as there’s a fairly telling 320 metres of vertical ascent to be climbed. It will also give Mossel Bay residents a chance to experience a world-class mountain bike race up close.
Monday’s Stage 1 takes the riders take on the #DiazDash leg from Mossel Bay, along the beach and into the indigenous forests of the Outeniqua Mountains to the finish in George. From there the riders will head to Oudtshoorn on the #MontaguMettle stage via the historic Montagu Pass and Chandelier Game Reserve.
Days 3 sees the riders tackle a new approach through the rugged Kammanasie Reserve, and a never before ridden section through the unspoiled Kapteinkloof and Madi-Madi Game Reserve. The #KammanasieKanon stage from Oudtshoorn to De Rust will offer some of the most relentless terrain in mountain biking as the riders get to grips with the merciless character of the Klein Karoo, a semi-arid biosphere.
Days 4 and 5 will see riders tackle the iconic monster climb over the Swartberg Pass, first from De Rust to the summit on the #SwartbergShowdown stage and then from Prince Albert to Calitzdorp on the #SwartbergSequel leg. These two days will ask riders to climb a total of 4450 vertical metres in 174km, a significant ascent-to-distance ratio that’s likely to differentiate the pretenders and contenders.
At 68km, the #RedstoneReward stage from Calitzdorp to Oudtshoorn is relatively short, but is unlikely to draw any complaints from weary riders as they bookend a week of high quality mountain bike racing.
“In the early days we tried to make the Cape Pioneer Trek stages as long and hard as possible. Then we realised that wasn’t what mountain bike racers wanted. They want proper mountain bike trails and varied, challenging terrain with distances that make for an exciting daily contest. It’s not a survival test, it’s a race,” said Cape Pioneer Trek co-founder, Henco Rademeyer of Dryland Events.
“We’re very excited about this new route, which is undoubtedly the most varied mountain bike stage race route you will find anywhere. From the beaches, through both indigenous and planted forests, over big mountains, through lush valleys, across deserts – variety is the Cape Pioneer Trek’s greatest treasure. The support of the local government and communities has been incredible and it’s truly a privilege to be able to host a mountain bike event in this region,” added Rademeyer.
The first riders will start the prologue stage at 10h00 on Saturday with the last team setting off at 13h21. The start seeding places the stronger riders on later start times. The start and finish of the Prologue will be at the Point, with recommended spectator spots at Delfino’s Restaurant and Santos Beach.
For those that can’t be at the race, there will be a 45-minute live-streaming show called Soul Search, hosted by acclaimed cycling commentator, Gerald de Kock on www.capepioneer.co.za on Sunday 18 October (Prologue), Thursday 22 October (Stage 4), and Saturday 24 October (Stage 6).
2015 Cape Pioneer Trek
18-24 October 2015
Western Cape, South Africa
Sun 18 Oct – #PointPursuit: Prologue, Mossel Bay – 13km; 320m
Mon 19 Oct – #DiazDash: Stage 1, Mossel Bay–George – 106km; 2300m
Tues 20 Oct – #MontaguMettle: Stage 2, George–Chandelier Game Lodge – 86km; 1550m
Wed 21 Oct – #KammanasieKanon: Stage 3, Oudtshoorn–De Rust – 94km; 1950m
Thurs 22 Oct – #SwartbergShowdown: Stage 4, De Rust–Swartberg Pass – 66.3km; 2150m
Fri 23 Oct – #SwartbergSequel: Stage 5, Prince Albert–Calitzdorp – 108km; 2 300m
Sat 24 Oct – #RedstoneReward: Stage 6, Calitzdorp–Oudtshoorn – 68km; 950m
Total distance: 540.3km
Total ascent: 10 250m
For more detailed event and route information as well as prologue start times, visit www.capepioneer.co.za. For up-to-the-minute updates, follow @CapePioneerTrek on Twitter; and for daily photo galleries, Like the Cape Pioneer Trek page on Facebook.
Cape Pioneer Trek Cycling featured Mountain Bike 2015-10-15
Tiaan Pretorius