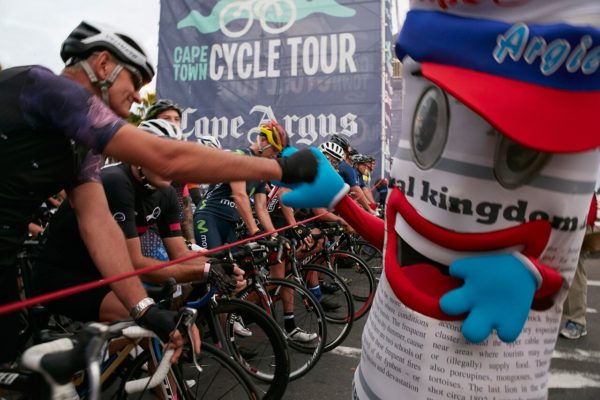 (Cape Town, 11 March 2018) Today saw the ‘rerun’ of the 40th edition of the world’s largest timed cycle race. Over 30 000 cyclists took on the iconic 109 kilometre route around the peninsula in almost perfect conditions, in contrast to the 2017 edition when high winds at the start and on the course forced the cancellation of the race.

One of our responses to the conditions in 2017 was to move the start for this year’s Cycle Tour to the Grand Parade Precinct. “We needed to be responsive in respect of this 2017’s challenges and looked to mitigate the wind risk,” commented David Bellairs, Marketing, Media and Sponsorship Director of the Cape Town Cycle Tour Trust. “Fortunately we were blessed with perfect cycling weather today,” he said.

The weather, indeed, was a talking point among most of the riders. “What an awesome ride,” said Tony Mcfarlane a 68-year-old rider who completed his 18th Cape Town Cycle Tour on Sunday. “Last year was a huge disappointment, so it’s great how the weather turned out today. And, I felt really good, I could’ve done another 20 kilometres,” he joked.

Minister of Economic Opportunities, Alan Winde, echoed Tony’s sentiments. “It was just such a beautiful day,” he said. “We couldn’t have asked for better weather. Last year when we had to cancel because of the weather, it went viral across the world and what you really want is a day like today to go viral,” he said. Winde completed his 10th event this year and received a special medal for his effort.

The women’s race saw a pioneering first when the elite and u23 women riders were offered the option of a 76 kilometre race, starting in Glencairn. This shorter route ensured a clear run all the way to the finish for the women.

“The first was a trauma incident just before 9:00 this morning on the M3 southbound in which a group of 20 cyclists were involved in a pile up. One of the cyclists succumbed to the injuries he sustained in this incident. His family has asked that we respect their privacy at this time and we will not be releasing his name.

“In the 2nd incident a male participant succumbed to a suspected heart attack at Smitswinkel Bay at approximately 10:22. Once again we are respecting the family’s wishes and not releasing his name”.

“Our most sincere condolences go out to the families of both these participants.”