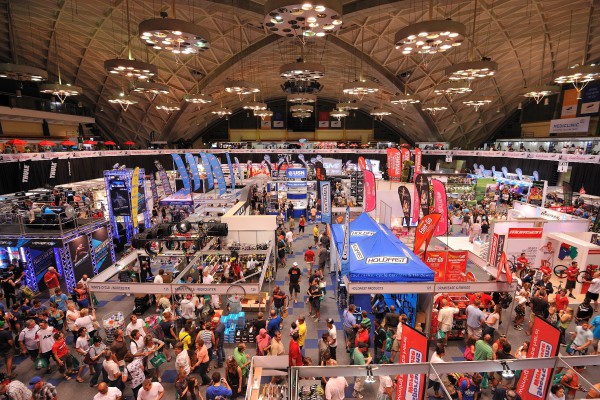 The idea started with one man selling T-shirts on the side of the road and now, on the 25th anniversary of the Lifecycle Expo, it’s the megastore of cycling.

“The whole industry is here,” said Eddy Cassar, the man with the idea. A quarter of a century ago he watched people cross the finish line in Camps Bay and saw someone on the side of the road selling T- shirts that read “I’ve finished the Argus.” Cassar had a lightbulb moment.

With 369 stands, the 2015 Lifecycle Expo is a cyclist’s shopping heaven for the about 80 000 visitors both locally and from abroad.  The 2015 edition offers top-of-the-range road and mountain bikes, cutting-edge bike tech, fashionable cycling gear and paraphernalia, as well as health and fitness products and information.

Each stand has a remarkable story – like the blind reflexologist who dreams in colour, the Guava man, selling bandanas who shouts “No more sweat in your eyes”, and has just spent 38 hours fighting fires, and the many charities raising money for wonderful causes.

One of the Lifecycle Expo’s many highlights this year is an interactive children’s area with Muna Bike, setting up a “mini Cycle Tour” route for children to navigate. There’s also special “testing station” from Powerade, helping cyclists prevent injury, increase power and improve their performance. Cyclists sad about not climbing Chapman’s Peak can visit the Virgin Active stand where there’s a simulation ride up the iconic peak.

In addition to the big name stores and brands like sponsors Pick n Pay and Momentum, are hobbyists – people who have invented products like Veleau a fuss-free cycle hydration system from saddle bag to mouth and TylerOptic’s bifocal sunglasses, which allow older cyclists to read their bike computers.  Then, of course, there is the Safari Biltong stand. “I get the most calls about this stand,” says Cassar, “people from overseas buy biltong and then, when they’re back home, phone me desperate to get hold of some more.”

The Watt Bike stand offers a three-minute threshold competition for cyclists – and cyclists can enter a variety of categories from the flip-flop classification to the buffalo group. “Anyone who is really bummed about not doing the full route on Sunday,” says Steven, the stand manager, “is welcome to come and do a three-hour session on one of the Watt bikes.”

There is also a gallery, displaying the Cape Town Cycle Tour’s rich heritage and conveying the evolution of its logo.

There is safe and secure parking on the Grand Parade, with a free shuttle sponsored by Avis to and from the Expo venue.  Renée Jordaan, Operations Director of the Cape Town Cycle Tour Trust, says: “The parking facility at the Grand Parade for the Lifecycle Expo is vitally important to an already top-notch event. Parking at the venue is limited, so we’ve implemented the free park-and-ride facility to ensure the convenience and safety of all our visitors.”

The Grand Parade is now the official parking area for all Lifecycle Expo patrons and exhibitors, with regular shuttles safely transporting them to and from the venue throughout the day. “Apart from organising the shuttles to commute our visitors and exhibitors, we’ve also arranged for security guards to be on duty at the Grand Parade parking area, as well as on each of the shuttle busses,” adds Jordaan.

Avis mini buses are in operation daily, with regular buses running from 8h30 to 19h30 on Thursday and Friday, and from 08h30 to 16h30 on Saturday.

Cyclists taking part in the Cape Town Cycle Tour can gain one-time free entry with their RaceTec chips.  General admission tickets for the public are R40 a person and free for people 65 and older.