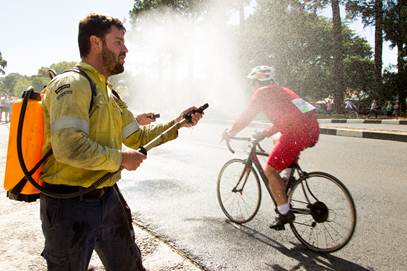 (Cape Town, 08 March 2015) While the pros raced for top honours the more casual Cape Town Cycle Tour riders came out in support of those affected by last week’s devastating fires and the men and women who battled them. Many of the close on 34 000 riders who lined up for the world’s largest timed cycling event’s Solidarity Ride this morning dressed in red, and at times large stretches of the Blue Route resembled a red sea of cyclists.

The Show You Care Solidarity Ride concluded a successful week of Cycle Tour events, starting with a weekend Mountain Bike Challenge, a three-day Lifecycle Expo and Saturday’s Juniors, a family event that saw parents trying to keep up with their pint-sized cycling offspring.

Riders on Sunday embraced the spirit of the Cycle Tour’s Show You Care Solidarity Ride.  Many riders wore red socks and painted their nails red. Some decorated their bikes in red tassles and some wore plastic firefighter hats with the words “thank you” written across them on top of their cycling helmets.

“When we got to the end of the Blue Route I looked to the right and saw the charred Silvermine Reserve – that’s when the enormity of the fire really hit home,” said Gus.

Supporters rang bells, blew vuvuzellas and chanted “go, go, go – you can do it” on the side of the road. Many of the supporters were also dressed in red. One banner hoisted by two young women read: “We love firemen.”

Herman said he got a bit tearful when he rode past the entrance to Newlands Forest and witnessed a group of dancing and clapping members of the Volunteer Wildfire Services. “They were thanking us for riding in support of them – after the triple shifts and the danger they faced fighting fires, they came out to thank us… I couldn’t believe it. It was a very special moment.”

One of the cyclists got off his bike and shook the hand of every single firefighter before getting back on his bike to complete the ride. Another cyclist also dismounted and bowed in their honour.  The cyclists were in awe of the firefighters but the feeling was mutual.

Richard Stubbs, one of the volunteer firefighters at Newlands Forest, said he was overwhelmed by the support – from the cyclists and from the public.

A large cheer went up when a group of riding firefighters crossed the finish line. “We owe you a debt of gratitude,” said the announcer.

After their ride, four cyclists from Norway, changed from cycling kit into running gear, then ran up and down Lion’s Head and on to Table Mountain. “We are doing this to honour all the firefighters and volunteers,” said one of the riders, Lars Bakke.

As usual, cyclists rode to raise money for charity with many dressing up in fancy dress. There was a superwoman, a zebra, a cow, a bear, a rhino and a couple of angels.

Despite the shortened distance, the 47km ride wasn’t exactly a breeze with some backmarkers pushing their bikes up Edinburgh Drive.

“There was a fair bit of climbing and as we left town soon after the start I got a face full of South Easter,” said Mandy, who was participating in her fourth Cycle Tour. “I chuckled and wondered if some of the people who had grumbled about not doing the full route were actually quietly grateful this morning that it had been reduced by 60km.”

From start to finish, the atmosphere at the Show You Care Solidarity Ride was magical, with riders exchanging smiles, hugs and high fives at the end. “What an amazing event,” said Lisa on the finish line. “It was fantastic – and not just because I did a super fast time. One day I’ll tell my grandchildren that I did a two-hour Cycle Tour. I’ll be the world’s coolest granny.”

David Bellairs, a Director of the Cape Town Cycle Tour Trust, concluded the 2015 Lifecycle Week, saying, “Cape Town Cycle Tour 2015 will go down in the annals of history as the sporting event that united us as a community to selflessly recognise the efforts and suffering of others.  Once again – to the entire team at the Cycle Tour, the residents of Cape Town and all other spectators and participants – we thank you.”