Champs-Elysées: 40 years of shows and thrills 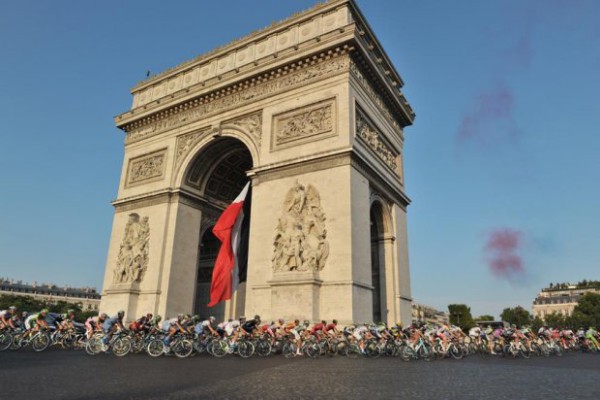 100 days before the finish of the last stage on 26th July, the partnership between the Tour de France and the French National Monuments Centre has been renewed. On the terrace of the Arc de Triomphe, Bernard Thévenet, the first rider to win the Yellow Jersey on the Champs-Elysées, also commenced the celebrations of his first title in 1975.

According to who you ask, the idea was put forward by the former director of Le Tour Félix Lévitan, the famous journalist Yves Mourousi or even the French President at the time Valéry Giscard d’Estaing. In any case, like many ideas that have durably transformed the face of Le Tour, it was a stroke of genius. Since 1975, the finish of the final stage on the Tour de France takes place on the Champs-Elysées: the most beautiful avenue in the world thus becomes the most beautiful sporting stadium in the world. The magic is still apparent each time, as demonstrated by the record audiences witnessed in France and on the international stage. Statistically, the scenario of this final stage appears predictable. Nonetheless, the spectacle of the most prestigious sprint of the season and the most sought-after podium finish, with the Arc de Triomphe as a backdrop, has become an event not to be missed by cycling enthusiasts and those interested in Le Tour. Indeed, this year, the Tour de France winner’s jerseys (for the general classification, best sprinter, best climber and best young rider) will be adorned with the silhouette of this monument that is emblematic of the French capital.

Since its 100th edition in 2013, and thanks to a partnership with the French National Monuments Centre, the last hour of the race has taken on a new dimension. On each lap of the final circuit, the pack now races around the Arc de Triomphe making an about turn on the Place de l’Etoile that allows it to head back down the Avenue des Champs-Elysées. This was not the case when Bernard Thévenet, just after the victorious sprint of Walter Godefroot, received the Yellow Jersey and succeeded Eddy Merckx on the roll of honour of Le Tour 40 years ago. On evoking these Parisian memories, Bernard Hinault (the stage winner on the Champs-Elysées in 79 and 82) was also congratulated for the 30th anniversary of his fifth title (in 1985), the last for a French rider. Also invited to enjoy this unbeatable view, World Champion Pauline Ferrand-Prévot is looking to the future because she will also be in attendance on 26th July as a challenger for the title on the 2nd edition of the La Course by the Tour de France, which takes place as a curtain raiser to the final stage finish.

Christian Prudhomme: “The union between the Champs-Elysées and Le Tour is a partnership that everybody knows about. Nobody can imagine a finish of Le Tour anywhere else than on the Champs-Elysées. At the time, it was a historical change and now the possibility or riding round the Arc de Triomphe gives even more prestige to this stage: the previous turn at the top of the avenue was not natural. This is another demonstration of the historical and aesthetic force of the Tour de France”.