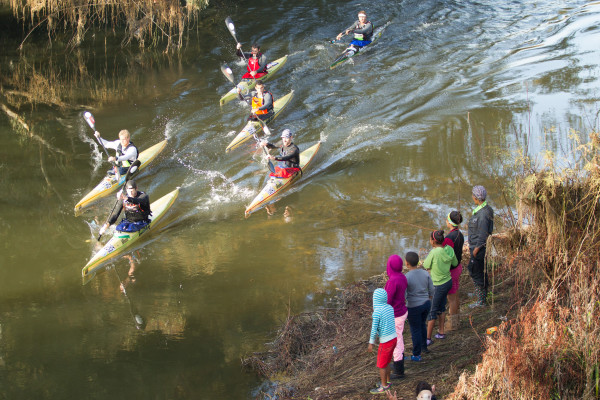 Paddlers were greeted to some unseasonably good weather for the first stage of the 2016 Berg River Canoe Marathon on Wednesday, 13 July. John Hishin/
Gameplan Media

Zonquasdrift – An unseasonably warm winter’s day in the Swartland for the first stage of the Berg River Canoe Marathon was matched with some heated racing on tough low water river conditions that eventually saw defending champions Hank McGregor and Bianca Beavitt set up overnight leads after the 62km first stage.

With an eleventh Berg title in his sights McGregor made mention after the time trial that he was going to maintain a healthy speed throughout but was not in the business of overexerting himself early in the race and with a couple inexperienced Berg paddlers around him he was able to set the pace throughout the opening day.

“It was a great day today and with such quick international paddlers it makes for a really exciting contest,” Euro Steel/Kayak Centres McGregor said at the finish of stage one.

“The pace was quick at times but was also quite pedestrian when we were all a bit unsure of where to go at stages but it was solid racing throughout and we eventually got the group down to four guys before Brendan (Rice) fell off the bunch 40 minutes from the finish.

“There was a bit of cat and mouse through the tree blocks and portages but I managed to stay near the front and had the pull coming into the finish.”

McGregor, who claimed the R1000 bridge prize at the Hermon Bridge, goes into the second stage of the race with a significant advantage in that he takes with him his time trial winning margin which takes his overall lead over Simon van Gysen to just north of 20 seconds with Boros effectively in third place overall despite his second place finish on Wednesday.

“My lead from the time trial isn’t really going to make too much of a difference going into day two and I’m stoked that I have a gap. It means that I can maybe take the first few kilometres a little bit easier but I will try and capitalise on any lead that I have,” he commented.

Hungarian marathon star Adrian Boros finished second on the stage and stuck to McGregor throughout however the K1 World Marathon silver medallist has impressed on his first experience of a Berg River Canoe Marathon stage.

“It was a really hard day today for me and I want to thank Simon and Hank for a great day. They tried to drop me at one stage but I put in a big effort to get back with them and I am happy with how it went today,” Boros mentioned.

Despite falling off the front three, Brendan Rice from Australia come home in fourth overall with his counterpart from Down Under Josh Kippin ending in eighth with Czech Republic star Petr Mojžíšek rounding out the top ten.

From the start of the ladies race Century City/Pink Lady’s Beavitt laid down the gauntlet for the rest of the ladies and they were unable to respond to her determination and power as she cruised into a three and a half minute lead over Mocké Paddling’s Nikki Russell.

“I made a few mistakes every now and then but we haven’t paddled this stretch of river that much so I did get myself into a bit of trouble but there were no swims so I am pretty happy with how it all went.

“I didn’t go into today expecting to have a lead at the end of the stage but I am really happy with three and a half minutes!” the defending champion added.

Russell, who took an early swim and subsequently had big gaps to make up, was in fine form as she attempted to hunt down the blazing Beavitt whose lead deteriorated slightly in the last quarter of the stage.

The Under 23 charge is led by University of Cape Town star Tyron Maher with young MAC Squad’s Tom Lovemore and Computershare Change a Life’s Banetse Nkhoesa rounding out the under 23 podium.

In the juniors Hamish Lovemore from Hilton College leads Michaelhouse’s Emmanuel Zaloumis with the hugely impressive Kyeta Purchase the third junior across the line.

Veteran and top ten hopeful Lee McGregor became the first casualty of the 2016 Berg when he pulled out during the first stage after he started the first stage under a flu cloud and once the chest pains became unbearable he withdrew from the race.

Thursday’s second stage of the Berg River Canoe Marathon is a 46km stage from Zonquasdrift to Bridgetown. More information can be found at www.berg.org.za