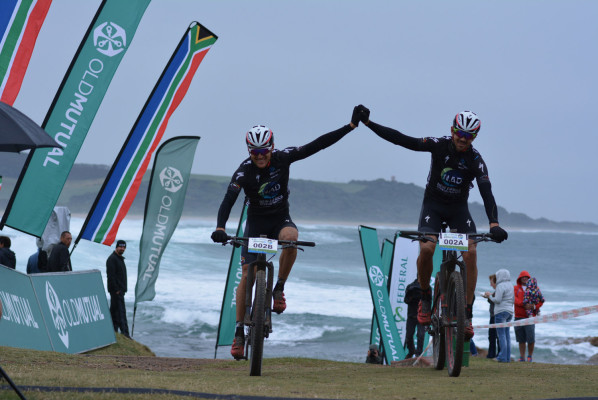 Johann Rabie and HB Kruger of Telkom won the stage – their fourth in total – when they got the better of NAD Pro on the single-track section that led riders to the floating bridge and finish on the beach.

Rabie and Kruger finished second in the overall standings after nine days of racing from Heidelberg in Gauteng. Andrew Hill and Tyronne White of Thule-Pyga-TIB rounded out the podium.

“They (Telkom) were full gas from the word go,” said Combrinck.

“We simply followed them and tried to stay out of trouble.

“They were a bit faster than us in the last single-track. We played it safe over the bridge; it is very slippery in this rain and I almost lost it.”

The 30-year-old said it felt great to collect a third trophy in as many tries.

“We were aggressive from the start and the only real hiccup was that one day when we went too fast down Bezuidenhout’s Pass and suffered a mechanical at the wrong time.”

Combrinck said they had good form over the second half of the race and were able to ride aggressively.

“On day six we felt that we were getting better and that is also when HB started to struggle a bit.

“We usually get better during a tour and I felt that day was the turning point.”

He said the elation of the moment would possibly only sink in later, but paid tribute to his 32-year-old partner.

“Nico and I have raced together a lot and we train together every day and he must be one of the best teammates one can have. It is vital on a stage race as you are only as strong as the weakest rider.

“It is also important to be able to look after your partner when he is going through a rough patch. We race very well together in that sense.”

Rabie, who has collected two titles alongside Combrinck in the past, was gracious in defeat.

“We tried to put them under pressure today to try and force an error, but realised it wouldn’t be possible as they were riding very well.

“I have to congratulate them, they rode brilliantly throughout,’’ said the 29-year-old from Malmesbury.

“Second is not as good as the win, but it is not the end of the world. It was HB’s first joBerg2c and he is relatively new to mountain biking and I’m sure we will still get our fair share of victories.”

He said he was relieved that the event was over as it had taken its toll and most of the front-runners were starting to struggle with their health.

Lill and Neethling, who both hail from Fish Hoek in Cape Town, won their fifth stage as they raced to a hard-fought overall victory in the Lanham-Love Attorneys mixed category.

“Today we decided to go out hard and to put the opposition on the back foot rather than waiting for them to do it to us,” said the 33-year-old, who has made a successful transition from road racing in recent years.

“Once we got ahead, we were actually able to take it relatively chilled. Being ahead of the other mixed teams took a little bit of pressure off in terms of possible mechanicals.”

He said they had a tough start to the tour with Neethling struggling at altitude and lost a fair amount of time over the first three days.

“I think it was good for us to have that challenge to make back the time. It almost makes it more worthwhile having to work hard for it and knowing victory didn’t come easily.’’

The 24-year-old Neethling, who rode an event of this length for the first time, said she was just happy to have made it through the nine days.

“I actually surprised myself. Maybe I rode myself fit, maybe I had a mental change and started believing that I could do it.

“It has been quite a journey in many ways. Not just the actual physical journey.”

The Bicycle Company-Bestmed pairing of Johan Labuschagne and Catherine Williamson, who lost their lead on the penultimate day, finished second overall, followed by Valencia-Lanham-Love’s Grant Usher and Amy McDougall.

“Everything you hear about the race turned out to be true,” said Macready.

“There’s lots of camaraderie, food, coffee, and the communities along the route go out of their way to make you feel at home.

“There were good and tough days. Congratulations to all who made it to the finish, and especially those who walked away as winners.”