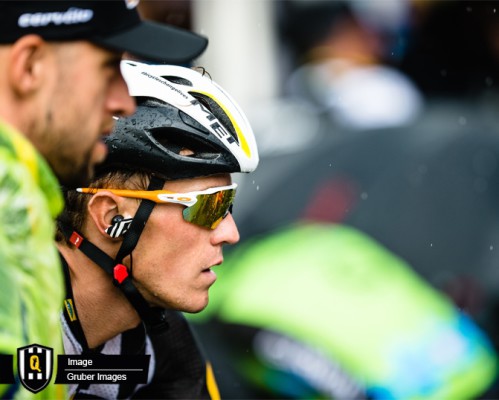 On a cool and gloomy day that saw the riders having to race 198km in wet conditions, 8 riders would form the break of the day after around an hour of racing. They soon became 7 though as a mechanical would eliminate 1 fugitive from the front group. MTN-Qhubeka p/b Samsung had all our riders positioned in the peloton as we headed out onto the undulating course.

The Italian riders take great pride in their local events and so it was no wonder that the Italian hopefuls who had missed the move sent their teams to the front to control the break. With a definitive final 70km left to race, the break had already been neutralised thanks to Astana and a few other local teams.

After numerous attacks a new break formed with just under 60km to race and it was the well-known trio of Rebellin, Nibali and Michele Scarponi (Astana) that got off the front together. The 3 major players were able to open up a minute lead before Bardiani and Southeast started making inroads into their advantage. Eventually Scarponi couldn’t sustain the pace as Rebellin and Nibali rode away with the race.

A reduced peloton had to settle for sprinting it out for 3rd place. MTN-Qhubeka p/b Samsung had both Merhawi Kudus and Serge Pauwels in this main group but they would not contest the sprint for the minor placing’s.

Alex Sans Vega – Sport Director
It was a rainy day and therefore with the steep uphills, small roads and steep descents we knew the race would become dangerous. There were a lot of attacks in the first 40km before the 8 riders were allowed a gap. They got a maximum of 4’30” lead with Astana working in the bunch. With around 60km to go, Nibali attacks with Rebellin and Scarponi. The peloton was only 35 riders with Bardiani and Southeast chasing but it was not enough to close the gap as the leaders survived by 2 seconds. We had Merhawi and Serge in the front group which was good on such a difficult day. Jayde crashed on one of the descents but fortunately he is okay.