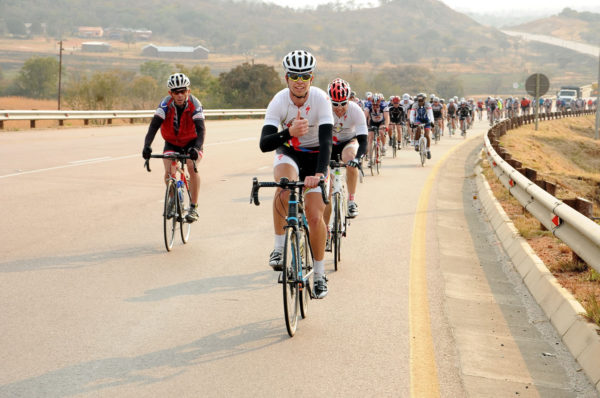 The feature road race at the Bestmed Cycle4Cansa Classic, which is hosted by Sun City, will return to its traditional route. Photo: Supplied

A strategic decision to switch the dates of the road and mountain bike races at the Bestmed Cycle4Cansa Classic, which is hosted by Sun City in late August, has cleared the way for the feature road race to return to its original route.

The 103km event, which made its debut in 1998, was forced to make use of an alternative course over the past three years to combat the increase in traffic – particularly heavy mining trucks – on the R551 from Thabazimbi.

Darren Herbst of ASG Events said this has seen the size of the field remain largely static in recent years and he was confident that the new “reversed” programme would provide the impetus for further growth.

The 25 and 50km mountain bike races, which are in their 10th year, will now take place on the opening day on August 20 with the road events, including the shorter 70km, on the Sunday when there is less traffic.

Herbst, the route director, said he was delighted with the changes to the weekend’s festival of cycling.

“It will add immense value and we feel the race now has a realistic chance of drawing a field of up to 8 000 riders as in the past.”

Herbst also placed much importance on the mountain bike offering.

“This element has grown steadily over the years and we’re very pleased with that.” He felt the Saturday slot would entice a lot more mountain bikers from the Gauteng area to make the trip to Sun City.

Although the main race on the road was now about six kilometres shorter than last year, it would provide a similar test, said Herbst.

“The difficulty is about the same, but the slightly shorter distance will make a difference.”

He said the event had a reputation as a flat and fast race and that its dynamics were perfect for cyclists who were easing into the second half of the season after winter.

A further incentive, said Herbst, was that the Cycle4Cansa Classic is an official seeding event for the Cape Town Cycle Tour.

Besides the main events, there are two children’s races – one for kids aged five years and under and one for youngsters 10 and under.

The weekend’s cycling also enabled event partners Bestmed, Sun City and Powerade to continue their mission of raising money and awareness for Cansa in the North West and Limpopo provinces, said Herbst.

Since its inception, over R3.4-million has been raised for Cansa’s education, patient care and support programmes.

The weekend culminates with the prize-giving and huge lucky draw prizes.

Sun City offer a variety of family entertainment options once the racing is done, including free entry to the Valley of Waves.

Visit www.cansalostcity.co.za for more information, or to enter before August 8.

Late entries will be accepted at the registration venues, but not at the events.