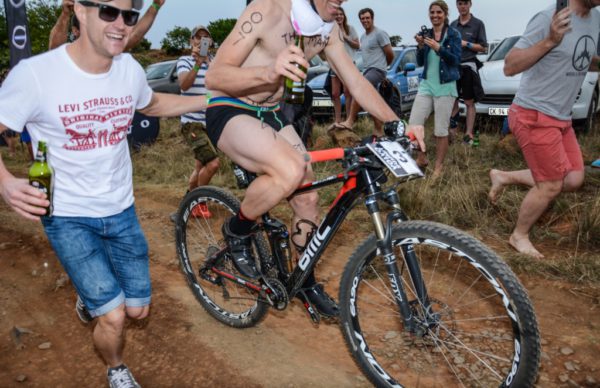 Grindrod Bank Berg & Bush participant Thys Blom is cheered on by the crowd as he tackles the Volvo Summit sprint on Spioenkop. Blom is participating at the Berg & Bush as part of his bachelor party, with the mad dash up Spioenkop the perfect opportunity for his mates to get him to do something daft in his underpants.

Around 40 of the toughest and fastest mountain bikers at the Grindrod Bank Berg & Bush entered the 2016 Volvo Summit, a 1.4km sprint shootout on Spioenkop in the heart of KwaZulu-Natal. Up for grabs for the fastest man and women was a cool R20 000.

The women set off first, with Neethling, the current Berg & Bush leader alongside teammate Adrian, determined to retain her 2015 crown – and pocket the best per-kilometre pay day in local mountain biking. De Groot had other ideas, though, and held off Neethling’s final attack as line neared.

“It was really hard,” said a breathless and somewhat surprised De Groot. “I only realised how tough it was once I got to the top and it levelled out.” 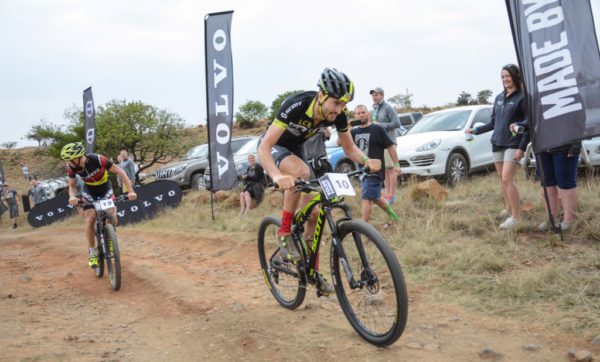 Gert Heyns overtakes Konny Looser to grab the men’s race at the Volvo Summit on Spioenkop, a race within a race at the 2016 Grindrod Bank Berg & Bush event in KwaZulu-Natal. Looser looks back to make sure his second place is secure. Heyns reached the top in a time of four minutes 35 seconds, a new record for the two-year-old sprint race.

With Berg & Bush participants lining the road to the top of Spioenkop and clanging their cowbells, a festival atmosphere pushed the riders on. “Having the other event participants watching was awesome. I’m very grateful for everyone’s support – though it did feel a bit weird to do a race in the middle of a race!” De Groot’s final time was six minutes and 10 seconds, Neethling finishing a wheel length behind.

In the men’s race there was a big bunch right up until the final kink in the road, where Swiss rider Konny Looser looked set to take the win. Gert Heyns was breathing down his neck, though, and with a final burst of power, he flew past Looser to snatch the prize money at the death in a time of four minutes and 35 seconds.

“That was really hard,” said Heyns. “The pace wasn’t too hot in the start, but then it got very tactical. It was actually flipping cool. I let the guys go early, then waited for the flat section in the middle to make my move and managed to catch Konny. The spectators really made it special.” 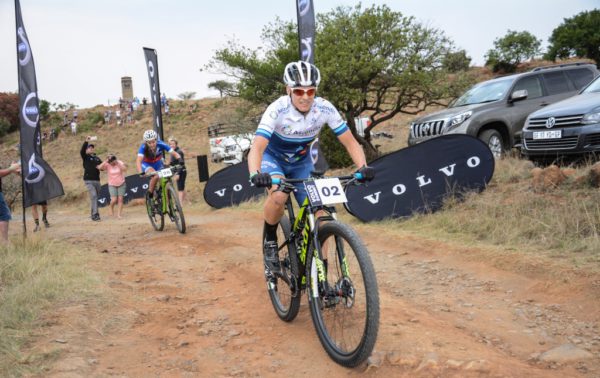 Robyn de Groot soars to the top of Spioenkop at the Volvo Summit during the 2016 Grindrod Bank Berg & Bush in KwaZulu-Natal. The 1.4km race within a race was worth R20 000 for the winning male and female rider. De Groot reached the top in a time of six minutes and 10 seconds.

Looser admitted, with a huge grin it must be said, that the whole experience was heavy going from start to finish. “Just pain. Pain all the way. I went hard a bit too early and that’s what happens, you get caught. It was fun, though. Something very different.”

Also enjoying something different was Berg & Bush participant Thys Blom, who is riding the event as part of his bachelor party. Boys being boys, the mad dash up Spioenkop was the perfect opportunity to get him riding up the brutal climb in his underpants.

“That was lekker,” said Blom after catching his breath and finding something to preserve his modesty. “What a jol, what a great idea. I tried to get one of those fast okes to give me a tow, but they were gone by the time I looked up!”