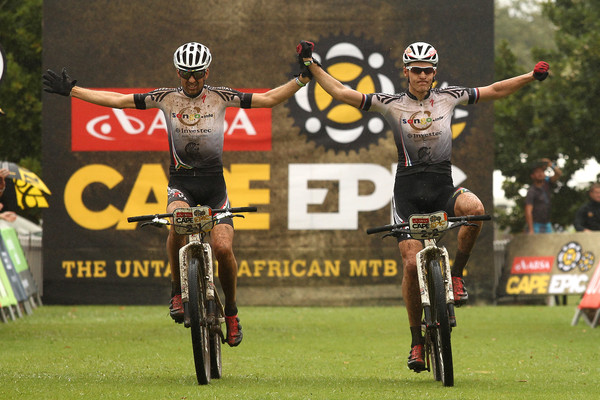 One of the top professionals in the field, Kargo Pro MTB’s Emil Lindgren, was out of the race after crashing on a descent off the flank of the Groenlandberg and breaking his arm. He was riding with South African Brendon Davids, who will have to soldier on as an Outcast – professional riders who can continue to take part but not compete and may not influence the outcome of the race.

The day was a tough one for riders throughout the field, with some 2 800m of vertical gain through the Stage and then a steady drizzle which made surfaces slippery and occasionally treacherous.

“It’s cool being in yellow zebra jersey after the first stage,” said Sauser. “It was my first real test of the season and everything went well. My legs were good today and we were able to put the Bulls under pressure at times.”

“I felt under pressure today because I didn’t have a good prologue,” added Sauser. “I felt super comfortable going over Groenlandberg (the major climb of the day). I was in control.” He added, however, that “you can’t control the downhill” and that is where he picked up the puncture. 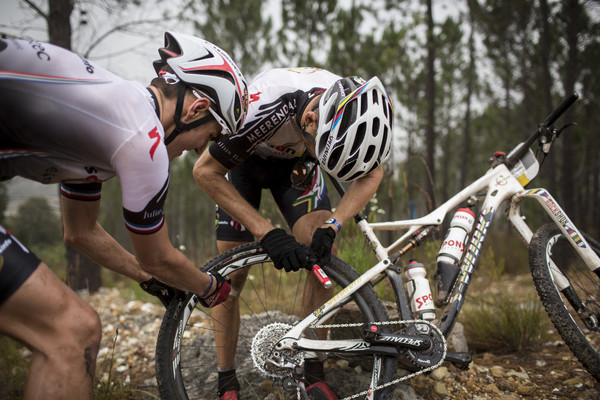 “It’s a good feeling being on the podium after last year’s bad luck (when he fell ill),” said Hermida. “We have the legs to fight for the overall, but anything can happen.”

Overnight yellow zebra jersey leaders Fabian Giger and Martin Gujan, both of Switzerland, dropped back to fifth place. Giger confessed afterwards that his decision to ride a “hardtail” – with no suspension on the back wheel – had meant for a “very rough” ride on the descents off the Groenlandberg. “Towards the end the course wasn’t so bumpy, so it got better,” he added.

The first South African pair home were USN’s Rourke Croeser and Travis Walker, who were behind the RED-E Blend team of Darren Lill and Waylon Woolcock for much of the day but managed to catch them in the last 25km and come home seventh.

Monday’s stage took orders in a loop which started and ended at Oak Valley Wine Estate in the Elgin Valley. Tuesday’s Stage 2 follows a similar format – starting and finishing at Oak Valley – but traverses different parts of the valley, and includes many sections of singletrack.