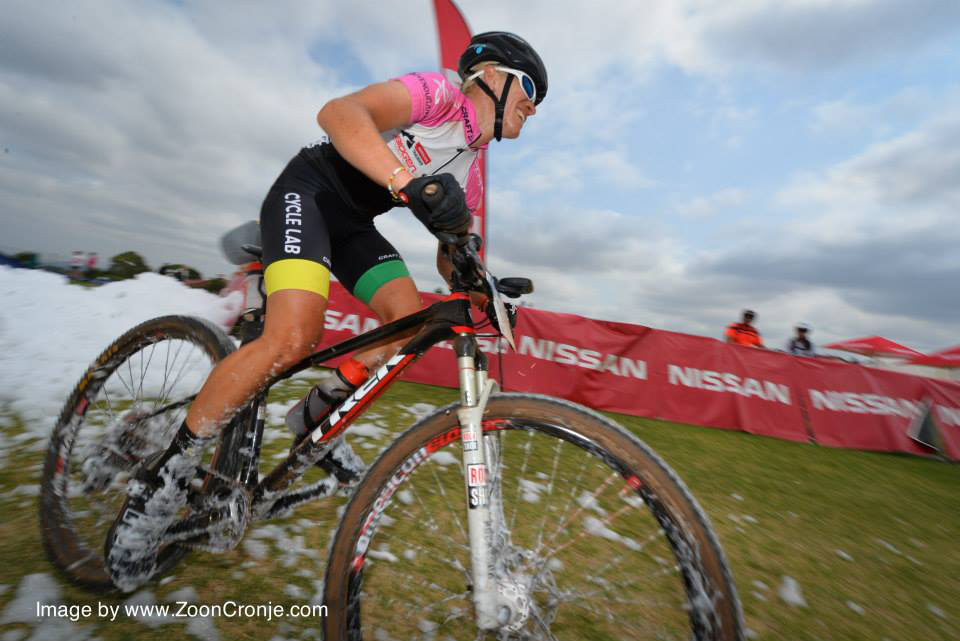 Robyn de Groot (Biogen Toyota), completed a clean sweep by winning the final round of the Nissan Trailseeker Series at the weekend.
Photo credit: Zoon Cronje/Nikon/Xtremedia

The Johannesburg-based rider clocked a time of 02 hours 32 minutes 44 seconds for the 68km event, which took place in breezy, overcast conditions and took riders on a relatively flat route to the south east of Pretoria.

For De Groot, it was the perfect way to end off the popular regional series in her home province. Over 200 women contested the marathon distance during the series, which is focused on hosting events in close proximity to the cities of Johannesburg and Pretoria.

The best four results in the series count towards the final overall rankings. With four wins already, De Groot didn’t even have to contest the final round, but she wasn’t going to miss out on the race.

“This series is so popular and attracts not only a lot of new women to marathon racing, but also gets very good media coverage. I owed it to my sponsors to be here today. I’ve had an amazing year in mountain bike racing thanks to the support of companies like Biogen, Toyota and Cycle Lab, my primary sponsors,” said De Groot.

“The organisers of this series, Advendurance, start the marathon women in our own group, which acknowledges the number of women now getting competitive in Gauteng marathons. I raced on my own for virtually the whole race today. The course wasn’t very hilly with lots of exposed sections of gravel road and jeep track. This ensured there were no bottlenecks, but also made it tough going on your own in the wind,” added De Groot.

This the first year that De Groot has won the Nissan Trailseeker Series title which offers some consolation after having finished as runner-up in the 2014 MTN National Marathon Series, which she won in 2013.

“This was my first year as a full-time mountain bike racer and I’ve had a very good year in terms of results. Winning the national marathon title for a second time and wearing the national champion’s jersey adds a bit of pressure in every marathon or stage race I contest. But I’m okay with that. I perform well under pressure,” smiled De Groot.

The final race for De Groot in 2014 is the FNB Wines2Whales three-day stage race, which starts on Friday in Somerset West. De Groot will team up with Britain’s Catherine Williamson for the event, which requires riders to compete in two-up teams.