Drama On The Finish Line 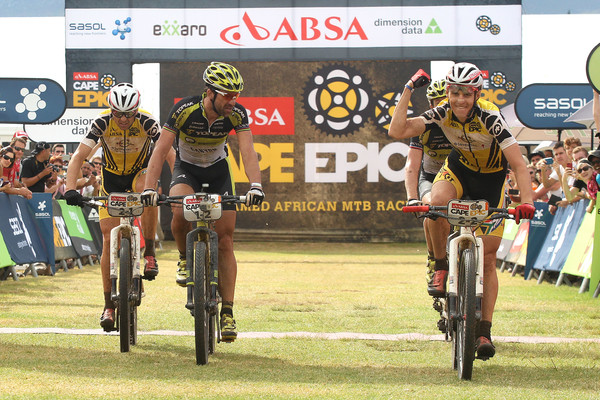 Jaroslav Kulhavy of Investec-Songo-Specialized (Far right) celebrates as his partner Christoph Sauser of Investec-Songo-Specialized (Far Left) crosses the line ahead of Kristian Hynek of Topeak Ergon (unsighted) to complete the stage victory as Alban Lakata of Topeak Ergon (2nd left) looks on during stage 6 of the 2015 Absa Cape Epic Mountain Bike stage race from the Cape Peninsula University of Technology in Wellington, South Africa on the 21 March 2015 – Photo by Shaun Roy/Cape Epic/SPORTZPICS

Switzerland’s Christoph Sauser is 87km away from becoming the first person to win the Absa Cape Epic five times after he and partner Jaroslav Kulhavy of the Czech Republic won Stage 6 in a sprint finish into Wellington on Saturday.

For the first time in the seven days of the event Mother Nature chose to smile on the weary competitors: some rain early in the day dampened down the excessively dusty conditions of the past few days and added some grip to the many trails which littered Stage 6’s 71km day. Earlier in the week riders had been confronted by rain and mud, excessive heat, headwinds and an excess of dust after an exceptionally dry summer.

But on Saturday Sauser and Kulhavy (Investec-Songo-Specialized) tore through the course with only one team – Topeak Ergon’s Kristian Hynek and Alban Lakata – able to stay with them.

The day ended with a thrilling sprint but Hynek misjudged his line through a corner just before the finish and the Sauser/Kulhavy combination pipped them for their fifth stage win out of six.

The win was Sauser’s 36th stage win in the Absa Cape Epic since his first race in 2005. He said afterwards that “it was a very exciting finish and today we didn’t have to eat dust (thanks to the rain)”.

He said the early part of the course had been tough but they had enjoyed the nearly 30km of “lovely singletrack”.

Kulhavy added: “Now we have one more stage and we’ll do everything to win it.”

Czech Hynek and Austrian Lakata remain second overall, but are ten minutes and 51 seconds back, a gap that they will not make up unless Sauser and Kulhavy have a calamitous final stage on Sunday.

Hynek admitted he had made a mistake in the sprint and said “it will take me a few days to get over it”.

Lakata described it as the “best day of riding in the whole week”.

He indicated that they would be going all out to win Sunday’s Grand Finale: “We’ve had four second places so far and we have to win a stage.”

Early in the day South Africans Philip Buys and Matthys Beukes (Scott Factory Racing) had tried to replicate their heroics of Stage 4 but could not get away from the two leading teams. They did, however, finish third to ensure that a South African team was on the podium for the third day in succession. In doing so they also snatched back the Absa African special jersey – making it the fourth day in a row the red jersey has changed hands.

“Our goal this morning was to get the red, so it was a bonus to get on the podium as well,” said Buys.

It was a good day for South African teams, with five in the top 10 finishers, but disastrous for two of the top teams: the Bulls’s Karl Platt (German) and Urs Huber (Swiss) came home more than 13 minutes back and Multivan Merida’s Jose Hermida (Spain) and Rudi van Houts (Netherlands) were nearly 22 minutes off the pace. They remain in third and fourth place respectively. Huber was off colour and had no power in his legs and Hermida has apparently been battling with a stomach bug.